.A Surprising and Effective Way to Reduce Waste 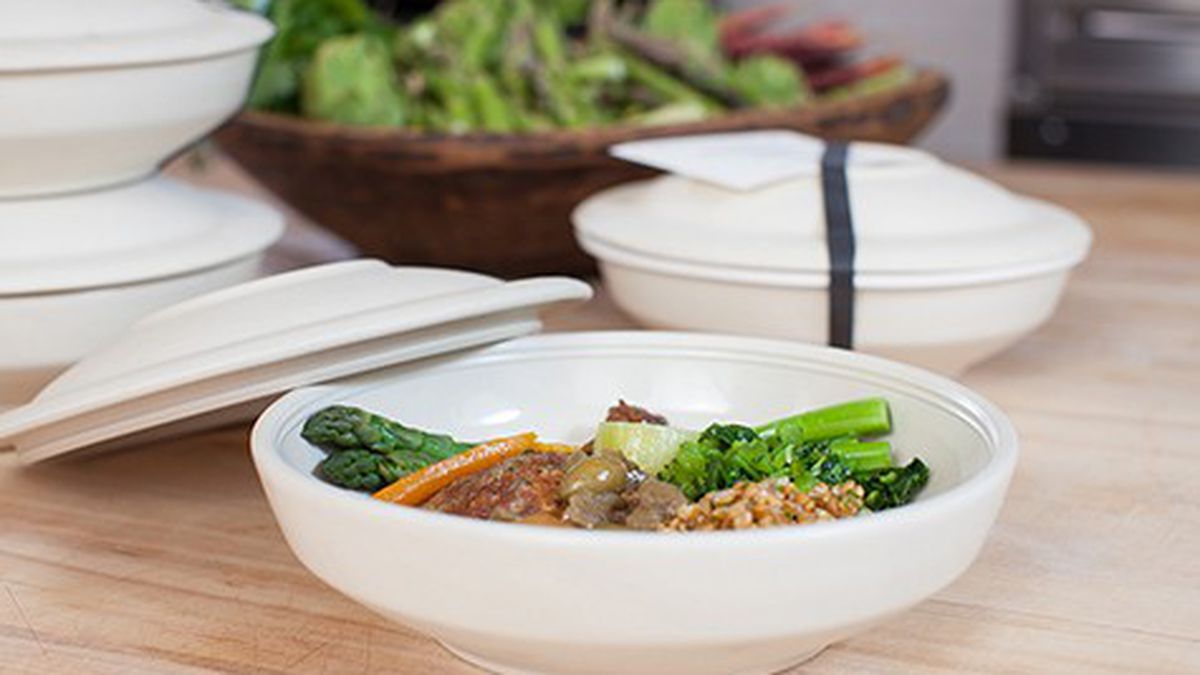 At Berkeley’s Standard Fare (2701 8th St.), former Chez Panisse chef Kelsie Kerr serves up elegant, locally sourced to-go dishes — slow-braised duck legs, delicate lamb tagines, and the requisite kale salad — that put the typical slinger of greasy takeout fare to shame. Yet the most revolutionary aspect of the business might not have anything to do with the food itself, but rather the packaging. Instead of using the standard plastic or cardboard takeout container, Kerr packs each to-go entrée order into a gorgeous, custom-made earthenware pot, which the customer brings back to the shop later in the week, at which point it can be washed and reused. Nothing gets thrown in the trash.

Standard Fare’s novel approach is part of a growing movement in the Bay Area to find ways to reduce the hundreds of millions of pounds of waste created by traditional takeout containers that wind up in landfills each year. Increasingly, reusable takeout containers — whether in the form of a ceramic pot or a more familiar-looking plastic clamshell box — are providing an eco-friendly alternative.

Paul Liotsakis, who has spent the past several years working for an environmental nonprofit in San Francisco, said he didn’t have to move beyond the courtyard at his office to notice that there was a problem. Day after day, he witnessed what he called a lunchtime “disaster”: the trash, recycling, and compost bins all overflowing, with more compostable containers winding up in the trash than anywhere else.

Eventually, Liotsakis decided to start a Bay Area outpost of a reusable takeout container service called GO Box, which was founded in Portland in 2011 by an MBA grad named Laura Weiss. It’s a fairly simple system: Food vendors sign up to get a supply of plastic clamshell boxes that aren’t all that different in appearance from the standard disposable variety, except that they’re sturdier and — most importantly — reusable. When ordering food at a participating vendor, customers turn in a physical token (or a virtual one, via smartphone app) to “check out” a takeout container. Then, when they’re done with their meal, they return the box to a drop-off bin to receive a new token. GO Box picks up all the used boxes and pays a local commercial kitchen — often a soup kitchen — to wash them so that they’re ready to be used again.

The containers, manufactured by a Texas-based company called G.E.T. Enterprises, can be reused at least five hundred times. They’re also microwave-safe, which for some customers is an added benefit. At the end of their lifespan, which, according to Liotsakis, might stretch for years, the boxes get recycled.

The downside for customers is that you have to pay an annual $29 for access to the boxes (though, in some cases, companies might offer the service as an employee perk), and you can only use them at food vendors that have signed up. In other words, the idea will likely be more appealing the more it catches on. For restaurants, though, the program has the potential to be a win-win: Liotsakis said he charges vendors less for the containers than they would normally spend on compostable takeout boxes or single-use plastic containers. And, of course, the business can earn some public goodwill for doing something that’s good for the planet.

In Portland, the translucent-green takeout boxes are primarily associated with the city’s ubiquitous street food scene. But because the Bay Area doesn’t have quite as large a concentration of food trucks, Liotsakis said he’ll initially focus on brick-and-mortar takeout businesses. So far the GO Box’s Bay Area pilot program has been limited to San Francisco’s Dogpatch district, but the company just received a grant to launch a pilot in Oakland. While Liotsakis said he’s still signing up food vendors to participate, GO Box is tentatively slated to make its East Bay debut in the Oakland City Center area on April 22 — Earth Day.

Reusable takeout containers are hardly a new invention; it’s just that they’ve mostly been used at larger institutions up until now. In fact, UC Berkeley’s dining halls have had a similar program — also using reusable plastic containers made by G.E.T. Enterprises — since the fall semester of 2012. At Cal, students can use three meal plan points (the equivalent of $5) to buy into the program. Michael Laux, the associate director of Cal Dining, said that the program has expanded to the point that there are now more than 8,600 students participating, with a total of more than 41,000 uses of the containers so far this year. In an email, Laux said it’s hard to quantify the environmental impact of the program — but at the very least, that’s 41,000 takeout containers that weren’t added to the waste stream.

It’s not difficult to find a number of East Bay restaurants that have taken intermediary steps to make their takeout packaging more environmentally friendly. Restaurants that sell soup or pickles as to-go items, for instance, now often use glass jars instead of disposable plastic containers — either building the added cost into price of the product or charging a small deposit fee, as the West Oakland Korean restaurant FuseBOX does for its to-go kimchi.

But no one in the East Bay has taken the concept of reusable takeout containers quite as far as Standard Fare, where the pots that Kerr uses to pack up a to-go dinner are likely nicer, and more durable, than what the customer uses to cook with at home. Kerr said she’s had the idea of starting a waste-free to-go food business built around earthenware cazuelas, or South American cooking pots, for about ten years. But the business, which she launched last year, really picked up momentum when she connected with the ceramics maker Jered Nelson of Jered’s Pottery, a neighboring business. The cazuelas that Nelson makes for Kerr can go in the oven or microwave, and the lid is sealed with a silicone gasket so the food doesn’t spill in transit.

Still, Kerr concedes that for some customers, or potential customers, it’s a hard sell. Some just don’t want to be bothered with the extra step of having to wash a pot and then haul it back to West Berkeley. (The store’s somewhat remote location doesn’t help, Kerr said.) Others are worried about the $45 fee they’ll incur if they fail to do so.

Regardless, Kerr said she’s never considered changing her approach. “The people who are into it are really into it,” she explained. And besides the environmental benefit, she loves the way her dishes look in the cazuelas and, ultimately, she’s convinced that the food tastes better when it’s reheated in the pot — something about the evenness of the buffered heat distribution and the overall “magic” of cooking in ceramic, Kerr said. This being the food-obsessed Bay Area, maybe that’s as powerful an argument as any environmental one.