The Coup's Boots Riley discusses Shadowbox, the evolution of his creative platform, and alienating NPR. 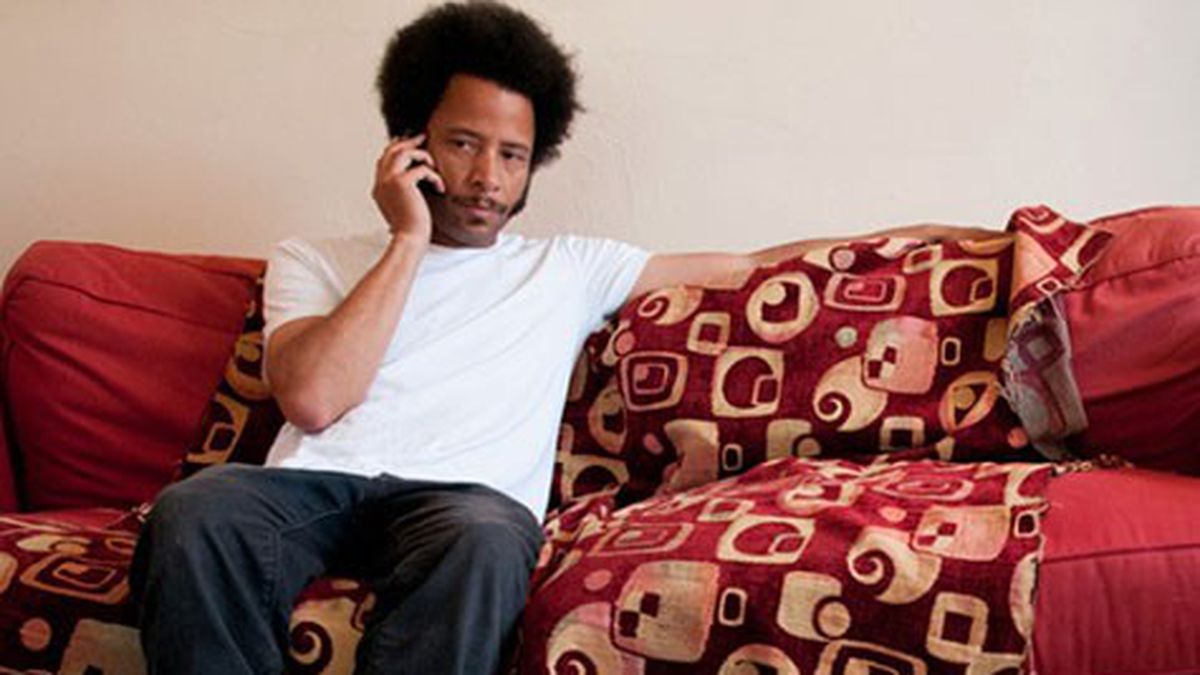 The employees at Oakland’s Brown Sugar Kitchen know Boots Riley’s order. The radical organizer and leader of the long-running local hip-hop group The Coup is even pictured on a page of the restaurant’s forthcoming cookbook. During a recent breakfast, several people walked across the bustling eatery to introduce themselves to Riley, including Ryan Coogler, director of Fruitvale Station. The two swapped numbers and talked about upcoming projects. Riley mentioned Shadowbox, an interdisciplinary performance and immersive installation premiering at Yerba Buena Center for the Arts (YBCA) on Saturday, August 16. Riley’s discussion of Shadowbox also doubled as a broader mission statement for his long and contentious career. From rapping atop The Coup’s boom-bap beats in the early 1990s through his current role as Shadowbox auteur, Riley has advanced a rigorous Marxist critique of labor and race under capitalism. He matches the sloganeering with tireless activism as well, which The New York Times and others covered extensively during Occupy Oakland. Shadowbox is Riley’s most ambitious undertaking, but it’s the logical leap for an artist intent on maintaining a fresh and provocative platform for his staunch political convictions. Or, as he put it, “We’re making a spectacular ruckus.”

The following is an excerpt from our conversation.

BR: My parents took me to a Theatre Artaud thing as a kid. This was when Whoopi Goldberg was running Theatre Artaud. It was supposed to enlighten people about AIDS, but I think it had the opposite effect on me as a little kid. The play was going on all around you. You were in a city where everybody is infected with AIDS. They looked like zombies and they’re sad and in pain and I was scared out of my fucking mind. I was much more scared than if I’d just been at a play, and it left an impression about staging things differently. In the past few years, I’ve also been to a few parties thrown by Guillermo Gómez-Peña that were more like happenings, featuring performance art within the event.

SL: Are you consciously trying to eliminate the fourth wall [the invisible barrier between audience and performers]?

BR: Yeah, but it’s not my passion to do that. My passion is just to engage people. Making them feel involved is one way, and showing them a spectacle is another way. I’m not particular. I want to use whatever tools I can. A lot of times breaking down the fourth wall is an ideology about performance, but I’m just always trying different things. Our shows are usually like dance parties, with pulsing energy and the whole crowd moving. When you go to something that’s theater you sit back and watch, and it’s the same with seeing visual art. I’m trying to keep the pulse while integrating these other things.

SL: Tell me about some of the visual elements involved.

BR: The whole place will be transformed and surrounded by mural art that John-Paul Bail has made. There will be three stages and other separate rooms. Sometimes people will perform at once. And then there will be large projections. There will be certain interactive parts and some things are definitely like narrative theater pieces within the space, too.

SL: Are there people involved who come from an explicitly theater background?

BR: No — except for David Szlasa, who’s doing production design and projections — I’m mainly working with musicians. They’re all like, “What the fuck is this?” To musicians, they go and play a gig. They’re wondering why we’re spending money on all of this other stuff instead of just playing a gig.

SL: Do you think the ability of certain art forms to deliver political content becomes exhausted over time?

BR: People get so comfortable with aesthetic conventions that their statement loses passion, gets boring, and then the experience just becomes nostalgic. Some of that has to do with lacking a clear analysis. So, a lot of what’s considered political music is just people saying over and over what the problems are, and that only goes so far. It’s just like in a movement: People can only go to so many demonstrations and say that they aren’t going to take it anymore without any clear idea of how it plays into changing things. If you do a sitcom about a single mother over and over, it’s not even going to be making any petty bourgeoisie statements very effectively. So, it’s all about being in touch with where we are, where need to get to, and what the strategy is for getting there.

One fan complained, saying that we were really fucking up because reviews called our music “celebratory.” Yeah, our music is celebratory. We have optimism that things can change, because we use a class analysis that shows us how the system works. Through the strategy of the working class withholding labor, we have a strategy for negotiating with power and then taking power for ourselves. That gives us a perspective on the future that’s bright.

SL: Can Shadowbox impart that celebratory feeling better than a typical concert?

BR: I don’t know about better, but differently. You approach ideas from a different perspective and it makes people engage with them differently. I’m also trying to keep myself excited with something new. From our second album on, we’ve had half the fans wondering what the hell we were doing and we’ve kept picking up new ones. Because of that, we’ve never fallen into becoming a nostalgia thing.

SL: Will staging Shadowbox at YBCA bring you to a new audience?

I don’t know if things work like that. We’re still not safe for a lot of people. There are a lot of acts where, I’m sorry, but they’re making the black experience palatable for you. For me, I’m talking about my experience in the black community, but I’m challenging people to work where they’re working. I’m saying that this is a problem, which is not yours in relation to the black community, but yours in relation to where you are, where you work, your community, and the system that you’re a part of. It encompasses everyone. It’s not just a way to create sympathy.

One of the marketing things that record labels are figuring out — for all sorts of bands — is that if you can get the NPR crowd, those folks buy records. So, there is a lot of conscious appealing to that. In those spheres, the conversation about me among programmers is like, “Oh, he’s talking about building a movement. Can that happen? I don’t know, but he’s a little off.” Since Occupy, The Coup’s opportunities have shrunken. Before, we were sort of this cute rebellious group and they let us in the door and it didn’t matter. After Occupy, it mattered.

SL: Typically it goes in the reverse, where radicalism is recuperated over time.

BR: Right. That happens with everything. You’ll see a picket line, and later you’ll think you see a picket line but it’s advertising a sale on jeans. Everything that’s cultural and aesthetic gets consumed by the system.

Next ArticleMid-Week Menu: The Kwik Way Is Closed, Muracci’s Is Coming to Berkeley, and The Dock Is Giving Away Beer