.An Oakland Nonprofit Wants to Change the Rap Paradigm 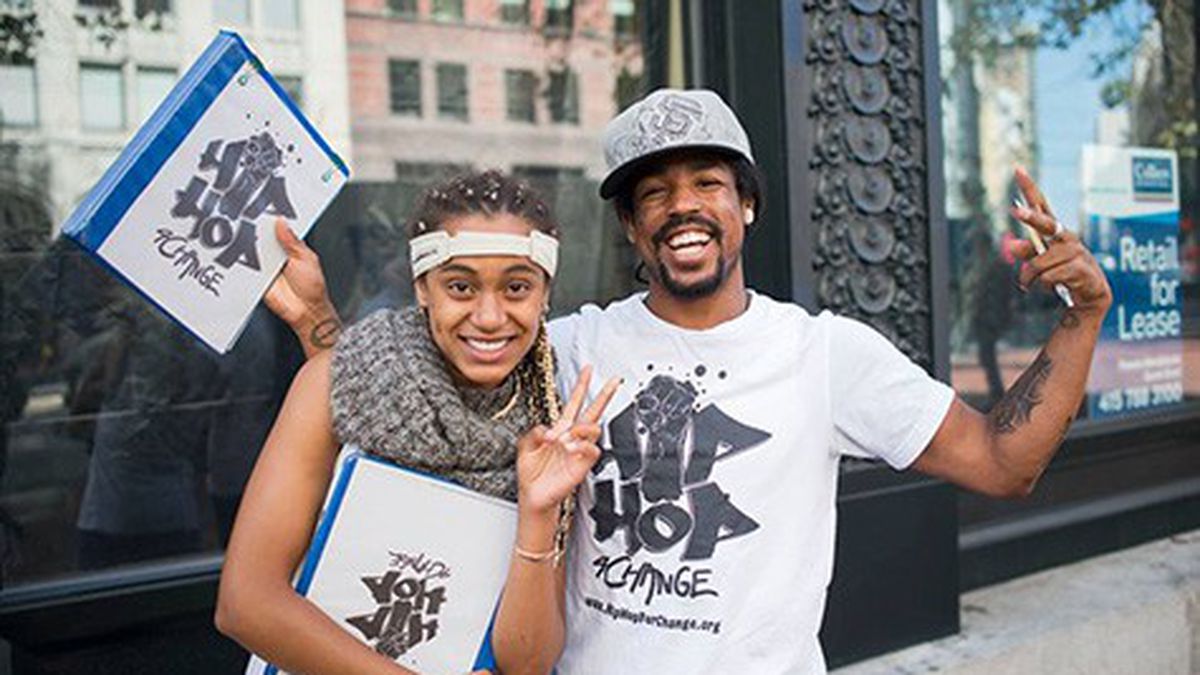 Hip Hop for Change wants to promote socially conscious artists and progressive lyricism, and organize grassroots involvement in the East Bay. The brainchild of two longtime activists, Devin Weaver and Khafre Jay (an MC himself and member of the group BPos), Hip Hop For Change views itself as a corrective measure for mainstream rap — but is critical of positive hip-hop’s trappings and clichés.

Over the past year, HH4C’s eight local showcases have drawn crowds of up to three hundred people and featured acts such as Brand Nubian, OrukusaKi, and Aisha Fukushima. The nonprofit organization is already making an impact, having written $7,000 worth of microgrants to the radical social center Quilombo, the arts nonprofit Loco, and many more causes. A concert scheduled for Saturday, August 23 at Oakland Terminal (2600 Union St.) will feature at least seven performers, including Richie Cunning, Earth Amplified, and Khafre Jay.

To fund the showcase and future performances, HH4C canvassers have sold more than 6,000 CDs in exchange for donations and a chance to explain their goals. Contributions from over 5,000 donors have helped to fund the manufacturing of CDs and T-shirts, compensate performers, and pay the organization’s six employees. Hip Hop For Change has launched an Indiegogo campaign seeking additional funds for CD reproduction equipment to manufacture future mixtapes.

“Most local hip-hop is real stories,” Khafre said. “[They] come from reality, rather than corporate, homogenized, commodified hip-hop.”

“What makes really awesome hip-hop is when people are being real, being honest, and being cunning,” He continued.

Dealing with reality doesn’t mean that the content is necessarily pleasant, but Hip Hop For Change and its featured artists offer narratives that don’t glorify drug culture, gang violence, or misogyny. However, deconstructing those themes is important. In fact, the local rapper Do D.A.T., who’s performed in several HH4C showcases and is performing August 23, argued that the common perception of conscious hip-hop needs an overhaul itself.

“What being conscious means also needs to be reframed and reshaped,” Do D.A.T. said. “To me, consciousness means you’re aware of the present moment, what you’re saying, and how it’s impacting. If you want to speak a truth that’s not pretty or uplifting, but speaks to your experience as a human being, that’s conscious.”

“If you listen to a gangsta rap record, you look into issues happening in our community,” he continued. “If you’re conscious enough, you can look into it and analyze it; it’s the American dream interpreted through that music. It’s coming from people who traditionally have had nothing, so of course it’s going to be exaggerated.”

“Hip Hop For Change is talking to youth in low-income communities and saying, ‘We want to be part of your life, to uplift you, to continue to empower you,'” said Seneca, an Oakland rapper and activist. “What we need is more unifying events and more unifying movements in the Bay, and I think HH4C is that.”

Moving forward, Hip Hop For Change seeks to expand its educational platforms and boost the radio presence of its artists. The organization’s MC program teaches the significance of hip-hop through history lessons, graffiti art, and writing raps. Many traditional schoolteachers aren’t equipped to discuss issues that often come out during the course, Khafre said, pointing to student verses on having parents in jail or teenage pregnancy.

Kensho Kuma, an Oakland Unified School District educator and bilingual MC born in Japan, thinks the course is effective. “Many of our students are apathetic about education,” he said. “Since HH4C delivers content from a hip-hop stance, the organization will be able to get through to numerous learners who would have otherwise remained uninterested.”

HH4C is also working toward securing a permanent spot on San Francisco’s KPOO 89.5 FM, a non-commercial station and one of the first on the West Coast to broadcast an all-rap show. Hip Hop For Change Radio can usually be heard on Sundays from 12 to 3 p.m., and while the show will exclusively promote conscious hip-hop, Khafre said there’s still room for all types of artists in the rap game.

“What should be pushed [on air] is every story from the hood,” he said. “Not just the small, made-up portion.”