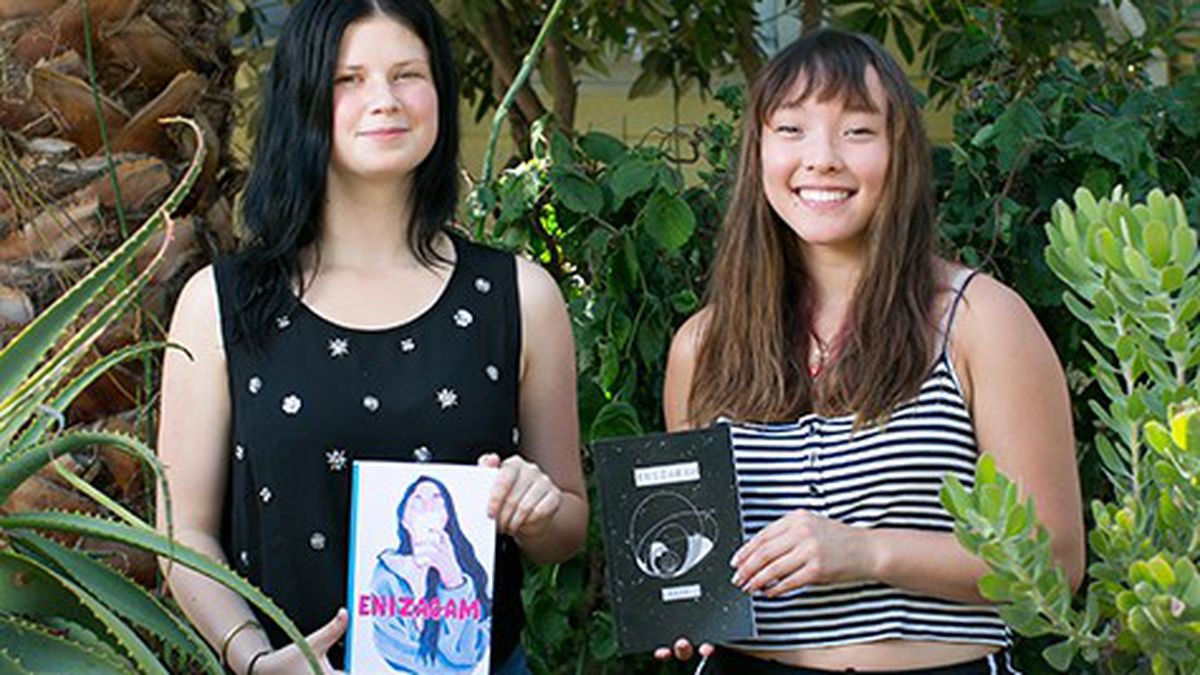 A Promising Class of Literary Rookies

At Oakland School for the Arts, high school students produce a professional literary journal that attracts national interest and preps youth for careers in writing.

The latest issue of Enizagam, an Oakland-based literary journal, contains interviews with esteemed authors Rebecca Solnit and Camille Dungy. The guest judge for its annual poetry contest was playwright and California Sunday Magazine editor Chinaka Hodge. And its short fiction contest judge was celebrated British writer Taiye Selasi. Considering the established names Enizagam attracts and the high-quality final product, it’s easy to forget that the writers who produce the journal are young literary rookies who haven’t yet graduated from the twelfth grade. As the introductory editors’ note reads: “Within this book is one classroom at the top of a tall building, protruding behind a Historic Oakland theatre. In that single room are twenty or so high school students scattered across desks, hunched behind laptops — all of whom have contributed their time, care, and grace to this very book you now hold.”

Enizagam — “magazine” spelled backwards — is put out once a year by a class of high school students at Oakland School for the Arts (OSA). At OSA, a charter school housed behind the Fox Theater, students spend the morning taking typical academic courses, then engage in art classes in the afternoon in various programs tailored to students’ specific interests, from digital media to figure skating. The Enizagam class is one of those afternoon engagement courses within OSA’s literary arts program. Rather than listening to lectures, the students take on roles in the production of the journal such as event planner, submissions reader, fiction or poetry editor, and editor in chief. They then spend the semester reading through hundreds of submissions, deciding who they want to interview, pitching the journal to bookstores for distribution, and promoting it with press releases and events. Each fall, the students release the journal that was finished at the end of the previous academic year, then start the process all over again. The journal’s ninth issue will be released in September.

In past years, literary arts faculty Kate Schatz and Jordan Karnes ran the class together. But recently, Schatz has become occupied with the success of her recently released children’s book, Rad American Women A-Z (see “Teaching Kids About Rad Women,” 4/15), and has handed over the reins to Karnes. In her role, Karnes oversees students’ work, enforces important deadlines, and guides them through production — but most of the process is student-driven. Even when they bring in guest judges, the students take the time to read through all of the entries and nominate three from each category to send to the judges. What’s more, this past year, every student in the class was female aside from one boy and one non-binary student (who does not identify as male or female) — a source of pride for the students who are aware that the literary field is still dominated by men.

Last year, seniors Emily Kim and Mina Jameson served as co-editors in chief of the journal. Both students had taken part in the class for most of their time at OSA and by the end of their terms, both appear remarkably equipped to enter the professional writing world. In the fall, Kim will be attending Evergreen State College, where she hopes to get involved with on-campus publications. But at the same time, she and Nicole Lovett, another Enizagam student,are also in the process of launching their own publication called Margins Magazine. The idea behind the online magazine is to publish writing by teenage girls who are marginalized in some way — whether because of race, disability, or sexual orientation. After putting out a call for writers, the duo has already established a staff of contributors from all over the country whose work they plan to publish regularly. The magazine will soon be up and running at MarginsMagazine.com.

Meanwhile, Jameson will be taking a gap year before college to do a journalism internship at the United Nations in New York City. She mostly writes poetry and short fiction, but she has also written novel-length works, screenplays and television scripts Having practical publishing and editing experience from Enizagam on her resume was crucial in landing her UN internship, she said in a recent interview. “It’s really a useful class because it reflects a sense of professionalism and seriousness that doesn’t come with the immediate association of being an artist,” she said.

While the class is a solid resume-booster, Kim and Jameson said the most rewarding aspects of working on the magazine were getting the opportunities to interview their literary idols and seeing the finished product on stands in local book stores. When asked to recall the most memorable experience they’ve had producing Enizagam, both editors mentioned the same moment.

Two years ago, while Kim and Jameson were both readers in the class, students were especially excited about a particular poem that ended up winning the poetry contest and an accompanying $1,000 prize. Although the contest had attracted submissions from all over the world by writers of all ages, the poet that won was a talented girl who was only seventeen years old. The students were ecstatic when they found out a teenager had won, because it made them more confident that there might be a place for them in the industry. Plus, they were happy to discover that they were contributing to making the literary world more appreciative of voices like their own. “It was really nice to know that we were giving someone the opportunity that we hope to be given someday,” Jameson said.

Correction: A previous version of this article misspelled Mina Jameson’s name. This version has been corrected.
Facebook
Twitter
Previous articleJenny Hval
Next articleWhat is THC, CBD and the Other Cannabinoids
18,639FansLike
0FollowersFollow
67,429FollowersFollow

The Def Poetry of Rafael Casal

The Hunches Call it a Day