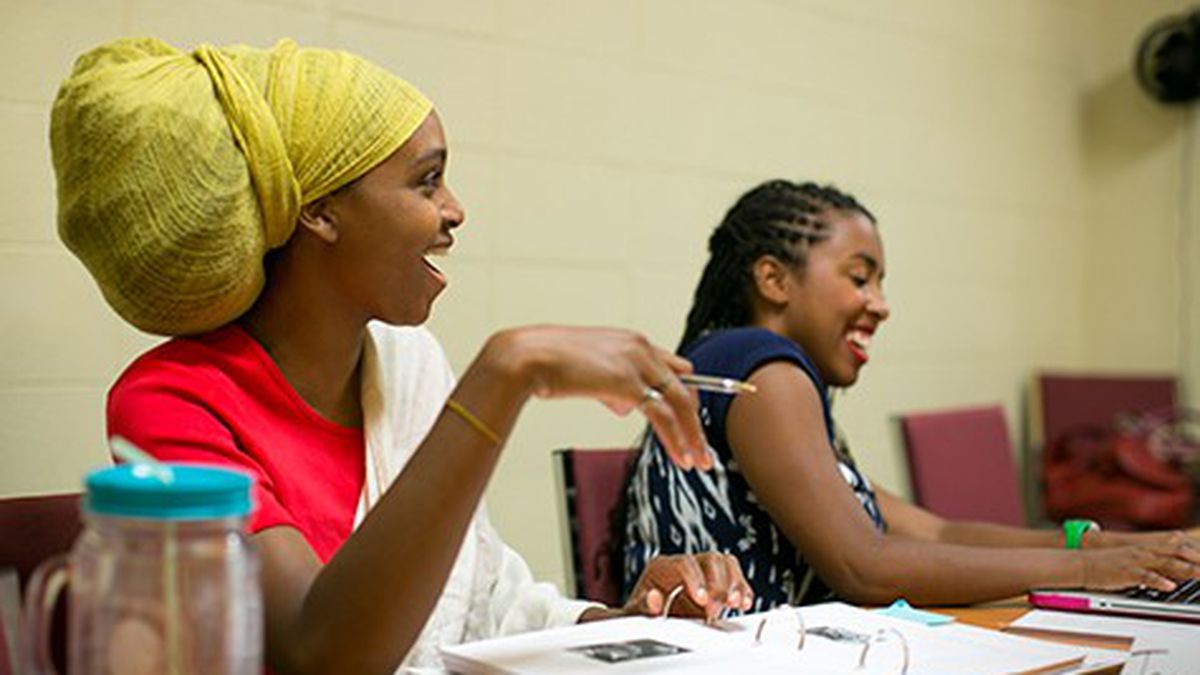 At Renaissance Entrepreneurship Center in Richmond, a diverse group of women learn how to combat discrimination and launch successful small businesses.

In 2013, when billionaire Sheryl Sandberg published her bestselling book, Lean In: Women, Work, and the Will to Lead, she spurred a national conversation about the ways that women can hold themselves back professionally by not seizing opportunities as aggressively as their male counterparts. But critics rightfully pointed out that the book — as well as the dominant conversation surrounding women in the workplace — failed to address institutionalized sexism and other forms of discrimination.

The overlapping struggles of gender, race, and class are precisely what the instructors at Renaissance Entrepreneurship Center work to tackle in their courses with aspiring business owners, many of whom are low-income. The nonprofit, which was founded in San Francisco in 1985 and opened a Richmond location last year, provides affordable business classes dedicated to the economic empowerment of marginalized populations.

While many courses at Renaissance are co-ed, since 2014, it has become a hub for budding female entrepreneurs from low- and moderate-income backgrounds — especially women of color and monolingual Spanish speakers. After the Women’s Initiative for Self-Employment, a long-running entrepreneurial training program with a location in Oakland, unexpectedly closed last year, Renaissance shifted its focus to meet the needs of these underserved populations.

With many prominent Women’s Initiative alumni in the East Bay — including the owners of popular sandwich shop Bakesale Betty and the Uptown boutique OwlNWood — the program was well known and still in great demand when it closed. Recognizing the organizations’ shared missions, Renaissance Entrepreneurship Center decided to absorb the Women’s Initiative’s low-cost, female-centric courses by creating Women’s Simple Steps to Business — a new program that serves similar demographics.

“There was a huge gap that was obviously going to be present in the Bay Area with Women’s Initiative closing,” said Bret Sweet, program director of Renaissance’s Richmond location. “So we wanted to make sure we could provide some of those resources.” In the East Bay, there are very few affordable programs for business coaching, especially ones that target women.

Women’s Simple Steps to Business, an eleven-week course taught several times per year in Richmond, is offered on a sliding scale of $100 to $350 based on income, and scholarships are also available. The program teaches the fundamentals of business ownership and aims to have students graduate with a financially viable, long-term business plan. In addition to covering the logistics of running a small business, the program works to close the so-called “confidence gap” between men and women. Because of the media’s portrayal of women and the discrimination and prejudices they can face at home, in the classroom, and in the workplace, many must overcome psychological barriers (as well as institutional ones) in order to see themselves as leaders.

“[The program] allows women to ask for more without feeling that this is going to get them called something or shamed,” said Sweet. “A lot of times women are taught that they have to put other people first and be the nurturer, so the empowerment is about making them understand that they have a vision and a mission.”

Currently, Renaissance’s Richmond location runs programs for English- and Spanish-speaking women and is developing programs in other languages to serve other immigrant groups in the East Bay, according to Sweet. The instructors often come from the communities they serve and are well equipped to address the particular needs of their demographic.

Susana Gama, who teaches Renaissance’s Spanish-language program in Richmond, said she is particularly passionate about teaching Latinas because she sees herself in many of her students. In addition to dealing with financial hardships and racial and gender discrimination, the women in the Spanish-language course face the challenge of navigating American institutions without a good grasp of the English language.

It’s a struggle Gama knows well: Though she had a successful banking career in Mexico, she found that her employment prospects were considerably diminished once she arrived in the US in 2003. She said that teaching entrepreneurship to Latinas in the Bay Area, first at the Women’s Initiative and now at Renaissance, has been as empowering for her as it has been for her students.

“When I came to the US, I had the same problems that many of my clients have. … They believe they are not good enough. They don’t have value in this country because they don’t have papers, or they don’t know English,” Gama said. “When they finish, they believe in themselves.”

Though they share commonalities, the students enrolled in Women’s Simple Steps to Business have a wide range of cultural backgrounds, educational experiences, and income levels; Sweet said this diversity is one of Renaissance’s biggest strengths. The women in each cohort often become a tight-knit group during the course, which allows them to build relationships with people from communities outside of their own.

This can help them expand their professional connections and client bases, Sweet said. “Women who are really low on the financial ladder gain exposure and camaraderie with women who are maybe making more money or are more educated than them, so they have access to this whole set of networks that they didn’t before.”

LaLisha Norton, a recent Renaissance alumna in the process of starting a massage therapy business, said that though her classmates came from different walks of life and were in different phases with their businesses, they were hugely supportive of one another. Some of her classmates were even among her first clients.

“Some folks had already started their businesses and they were operational. Some folks just had concepts or ideas,” she said. “It didn’t really matter where you were in the process. You still received valuable information.”

Shalina Akins, another alumna, described her cohort this way: “We created a family in those eleven weeks that we were together.” Akins has a background in family counseling and is working on launching a mental health-focused product line that will include resources for parents and children. “There was zero competition, zero intimidation,” she said. “The space for your insecurities to come out really wasn’t there because it was so safe a space, and I think that was because it was just women around the table.”