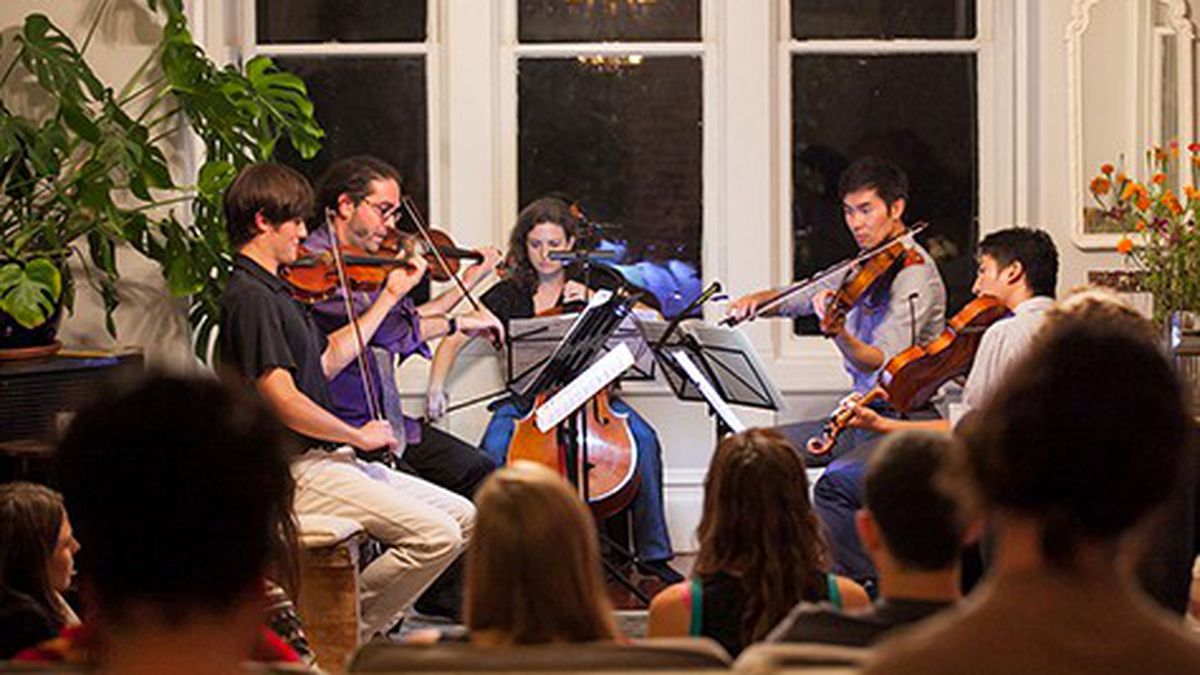 A New Stage for Classical Music

Groupmuse is a startup that brings live chamber music to people’s homes.

After Charith Premawardhana, a San Francisco-based violist, graduated from a music conservatory, he grew frustrated with the lack of diversity at prestigious Bay Area symphonies and orchestras. “I would look around in the audience and see it was mostly old, white people,” he said. “I wanted to have the opportunity to play for younger people — people my own age.”

In 2006, Premawardhana, 36, founded Classical Revolution, a nonprofit group dedicated to bringing chamber music to nontraditional settings, including bars, cafes, galleries, and museums. The goal was to reach broader audiences by putting on concerts in accessible and comfortable environments. And in recent months, Classical Revolution members and other local chamber musicians have expanded to performing in living rooms.

The conduit for these gigs is Groupmuse, a startup website that launched in Boston in 2013 and expanded to the Bay Area in June. The concept behind Groupmuse, which is run by three recent college graduates, is simple. Groupmuse connects people interested in hosting chamber concerts in their homes with musicians seeking unique, intimate venues.

“The idea is just trying to bring [chamber music] to as many places as possible,” said Premawardhana, who has organized seven Groupmuse shows so far and is performing in one in Oakland on Saturday.

Audience members register and RSVP online, and while shows are technically free to attend, Groupmuse representatives strongly encourage donations of $10 or more. All the proceeds go to the musicians.

“We have a lot of extremely talented musicians in the area that don’t get to play enough,” said Kyle Nichols-Schmolze, Groupmuse’s Bay Area coordinator, co-founder, and chief technology officer. “Musicians don’t get many opportunities to play for their peers and to play in intimate settings for young and excited crowds.”

Sam Bodkin, the company’s New York City-based founder and CEO, said he first got the idea for Groupmuse after befriending a group of New England Conservatory chamber musicians who would regularly play for friends at an apartment in Boston.

“They are all spectacular musicians, and they used to gather in this one apartment and party long into the night, playing music at a really high level,” said Bodkin, 25. “It had this life-affirming, soul-enriching characteristic that only great works of art can really impart to audiences.”

Since Bodkin launched the startup, Groupmuse has facilitated more than three hundred concerts across the country; it now averages more than six concerts per week and, according to Nichols-Schmolze, has a network of more than five hundred musicians.

In the Bay Area, there have been nearly forty Groupmuse events so far. Nichols-Schmolze estimated that about one hundred local musicians have participated.

Introducing a string quintet for a recent Groupmuse show in a South Berkeley house, Nichols-Schmolze said, “The original Schubert and Chopin concerts … were all in living rooms. This is how the music was meant to be enjoyed.” Even for people who aren’t classical music fans, hearing chamber music in such a cozy environment can be remarkable. A young man seated near me in the crowd of more than thirty people shared his bottle of wine and commented that there are few opportunities to sit a few feet away from live classical music.

At that distance, you can hear detailed flourishes of each instrument and feel the emotional nuances of each performer in a way that simply would not be possible in a concert hall. It’s also more fun to hear chamber music while sitting on a couch with your shoes off, drinking a beer and hollering loudly after a particularly impressive Mozart movement.

“People are really put off by the idea of going out to a classical concert,” said Anne McGlynn, a North Oakland resident who is hosting her second Groupmuse this week. “It’s just so intimidating and prohibitively expensive.”

For Bay Area musicians, the appeal of Groupmuse is less about cash compensation and more about adapting at a time when traditional classical music institutions are struggling. Premawardhana pointed out that while established orchestras now face declining support from donors and government art subsidies, more new musicians are graduating from conservatory programs.

Mosa Tsay, a Berkeley-based cellist who has done two Groupmuse gigs, said that she enjoys seeing the immediate reactions of audience members.

“All the performances in the classical music realm happen in concert halls where the audience is in the dark and the performers are on a brightly lit stage,” she said. “Groupmuse just completely shatters that.”