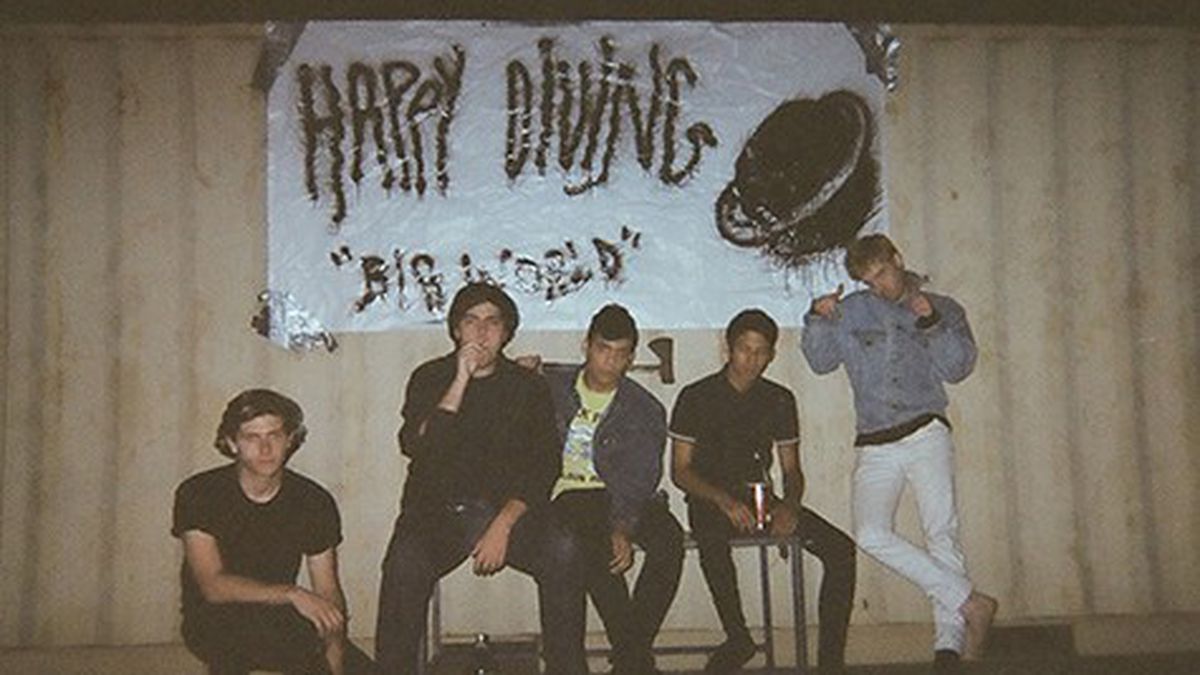 The twenty-year-old San Ramon resident on the suburbs, skateboarding, and "pumping and breathing."

Skateboarding is the classic pastime of suburban teen malcontents for good reason: By defying the intended use of public space, it appeals to young people who question broader cultural expectations. Reassessing concrete surroundings leads to skepticism about the prescribed conventions of growing up. For Matt Berry, San Ramon native and twenty-year-old bandleader of Happy Diving, skateboarding pivoted him away from suburban malaise and toward the Big World.

The title of Happy Diving’s confident debut — Big World — is scrawled beneath a black-and-white photo of some goofy-spooky silhouettes. It’s in quotation marks, emphasizing the ambiguity: Is “Big World” ironic grandstanding, youthful naivety, or a hopeful prediction?

The music has all three qualities. Torrents of feedback get sharpened into mightily indulgent guitar leads and copious solos, which Berry casually described as “dumb” and “masturbatory.” In these guitar-weary times, displaying proficiency is likely to attract such slights. Preempting them forces the question of whether the guitar playing on canonical records by Dinosaur Jr. is “masturbatory.” Basically, it is. In the context of balanced songwriting, it’s also wonderful. For Happy Diving, owning showy guitar playing makes it elevated and dignified.

Happy Diving’s similarity to Dinosaur Jr. threatens to engulf the whole project. It doesn’t, however, because impeccably executed homage has its own charm. Big World’s strength also lies in its production. The low-end feels guttural, the sweltering guitar noise is intoxicating, and a deliberate recording error lends it a sense of constant inflation.

Jack Shirley, who recorded Big World, said that Happy Diving requested what recording engineers call “pumping and breathing.” Extreme compression and distortion can exacerbate the punchy low-end of a recording, but it also causes drop-outs and inconsistency in the high range. Most engineers consider it a mistake and others employ it sparingly, but Happy Diving insisted on it for the entire album. The perpetually swelling effect evokes a band growing out of its own style. Likewise, it evokes the restlessness of Berry’s teen epoch.

Recently, Berry walked in to 1-2-3-4 Go! Records, where Happy Diving’s record release show will occur next Wednesday. He had no money because he didn’t bring a wallet (it would’ve fallen through the holes in his pockets). He idly looked at records, lamented their cost, and noted personal connections.

“When I was eighteen, I got into Dinosaur Jr., Built to Spill, and Pavement,” he said. A detached tone made it seem like that was more than two years ago. All of Berry’s reflections were like that, every distinct period of his teens chopped into tiny increments of a year or a grade. He made high school seem like a lifetime of reinvention.

Berry grew up in a religious household in San Ramon. For Christmas when he was twelve, Berry received a beat-making computer program and commandeered his brother’s present, a toy keyboard with a microphone attached. He picked up a guitar around this time as well, and attended youth group and Christian metalcore concerts.

“Looking back, they were so bad, but twelve-year-old me was all about it,” he said. Then, he rejected the faith-based music scene. “It actually put a bad taste in my mouth for guitar music.”

Skateboarding dominated the next phase. He mostly sought out music to complement the activity and made “dumb electro” on his computer to amuse friends. Through skateboarding, he also rediscovered rock. “Dinosaur Jr. was the reason I started playing guitar again,” he said. “I saw this skate video called Mind Field and it had three of their songs.”

Within a year, Berry had formed Happy Diving. Inspired by the production on recordings by the local rock outfit Wild Moth, Happy Diving booked studio time with Shirley. Happy Diving tracked its first EP after rehearsing as a full band only a few times. Then, Berry heard the local pop reductionist and gratuitous shredder Tony Molina before recording Big World. “I heard [Molina] and thought, ‘Dang I need to get better at playing guitar for the album.’

“I wrote [Big World‘s] songs when I was nineteen and twenty,” Berry said. “In that time, I became involved with a music scene, met all of these people, and my world sort of blew up.” Indeed, Happy Diving shared bills with Wild Moth, played with Molina earlier this year at South by Southwest, and recently toured the West Coast. Jessi Frick, whose Father/Daughter record label is releasing Big World, noted a budding regional trend: Guitar-centric, 1990s-indebted rock bands from the Bay Area are beginning to reach broader audiences.

Berry still lives with his family in San Ramon and works at the local movie theater. He still skates, but with more caution. Pain tends to linger for longer than when he was in high school. “My friends and I were just talking about the skate park closing,” he said. “Without that place to hang out, it’s like a certain kind of San Ramon teen won’t exist anymore.”

That’s probably not true. San Ramon’s restless teens will just entrench themselves elsewhere and — after what feels to them like an eternity — quickly won’t be teens anymore and the world will open up. “It’s the suburbs and it’s awful,” Berry said. “Happy Diving is my ticket out in a way.”