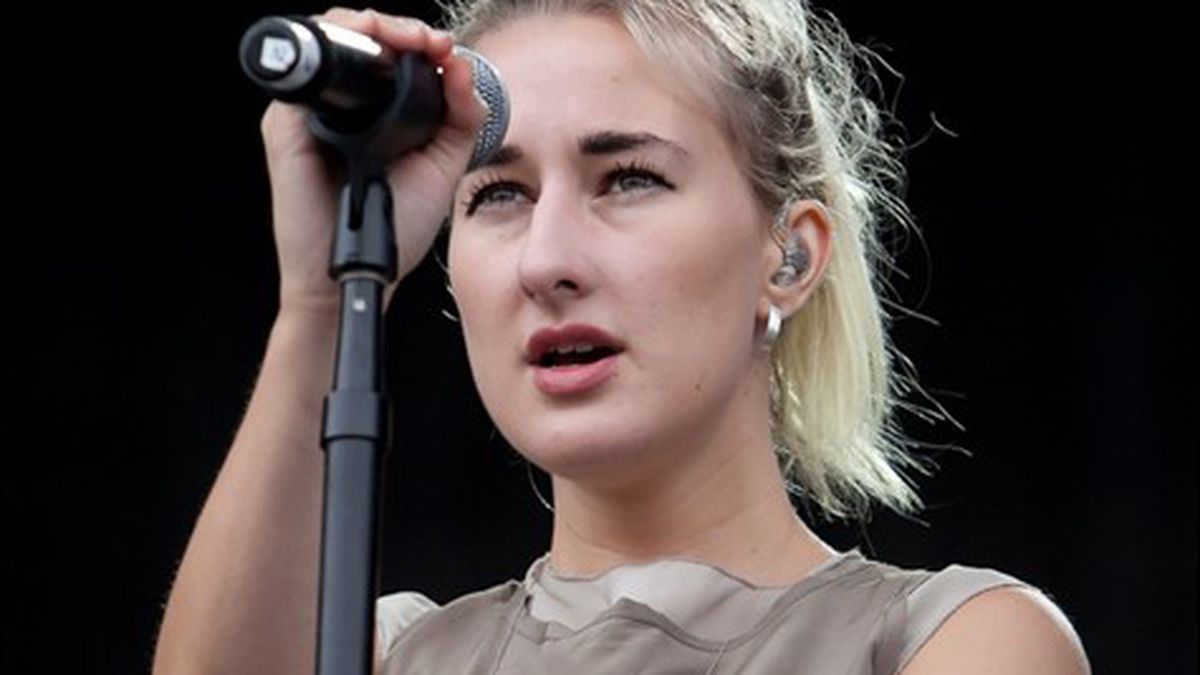 A More Expansive Outside Lands

Comedy, performance art, and audience participation were among the highlights at this year's festival.

Much of Outside Lands’ success derives from an airtight booking formula: Festival producers choose a few nostalgia acts to serve as headliners, juxtaposing them with contemporary electronic and indie rock bands of about equal caliber. (This year’s Friday night show paired Neil Young & Crazy Horse with French electroclash duo Justice, while Saturday set Metallica against the Icelandic band Sigur Rós.) Many of the second-tier acts come directly from Billboard charts of the Nineties and early 2000s. Thus, the most fresh and compelling bands are often the least obvious — like Afro-Latin hip-hop outfit Bomba Estéreo. Unless you’re keen on watching video monitors all day, the smaller billings on the Panhandle stage, tucked in a corner of Hellman Hollow, was often the best place to be.

On paper, this year’s festival looked fairly predictable, except that the tent-pole acts were even older than usual — what better way to top Neil Young than book Stevie Wonder for the closing ceremonies? — which probably made them a bigger draw. Yet, in many ways, Outside Lands 2012 was a paradigm shifter. Much of that owed to an adventurous comedy lineup, bolstered by partnerships with Nerdist Industries and the Adult Swim network. But that’s not to overlook a few creative curatorial decisions. While Stevie Wonder might be an obvious crowd-pleaser, he still has a somewhat anomalous presence in the Outside Lands pantheon, which has traditionally skewed rock — last year’s fest closed out with Arcade Fire. In fact, an overview of the 2012 lineup shows a surprising emphasis on world music acts, local up-and-comers, and performance artists like free-associative loop-master Reggie Watts.

That seems to be of a piece with Outside Lands’ ever-evolving credo. Festival producers often tout their event as equal parts “music and art,” a label that has gained increasing cachet on the festival circuit. (Bonnaroo, South by Southwest, Treasure Island, and Coachella seem to always be in an arms race to expand their curatorial reach, even though the same people often produce them.) This year, the “art” part felt well-earned: With outdoor installations, an expanded wine garden, craft beers from sixteen breweries, 65 booths from well-vetted restaurateurs, and a wall-to-wall comedy lineup, Outside Lands proved it really is more than a cluster of music stages. No wonder 2012 was the first year it sold out in advance. We were lucky enough to grab tickets, so for those who missed it, here’s a brief recap:

One of the most noticeable things about the crowd at Outside Lands was how non-local it felt: concertgoers were overwhelmingly in their twenties and Southern Californian (or so it seemed, from their lack of warm clothing). While promoters did a great job of booking Bay Area bands, there was some unspoken disconnect with the audience. Take Oakland electro-hip-hop-pop act Wallpaper, who performed an energetic set early in the day on the Twin Peaks stage. When frontman Ricky Reed shouted out the Bay Area at one point, asking how many had seen him play at a party in Berkeley or at the Rickshaw Stop, he got little response. His heavy-on-the-booty-bass set, which included hits “Okay” and “Fucking Best Song Foreverrr,” had the most local flavor, but we’re not sure if people got it.

It’s difficult to describe what, exactly, performance artist/beatboxer/comedian Reggie Watts is doing, but the conclusion is clear: He’s fucking brilliant. Interspersing looped beatboxed songs with “comedy” bits, switching voices from nerdy, earnest, and straight to twee to falsetto R&B singer, his nonlinear format seems random, but is also totally engrossing, because you never know what will happen next. We’re not sure what’s going on inside his brain, but we like it.

Following Watts on the same Sutro stage was New York/Philadelphia’s The Walkmen, a band we love in theory but less so in real life. The band’s newer material, while containing many of the same elements of its earlier stuff (the jangly, heavily reverbed guitar and impassioned vocals), lacks something vital. The tension keeps building but there’s no payoff. Mostly, we want an excuse for drummer Matt Barrick to let loose.

As previously mentioned, the comedy element was so strong at Outside Lands that we could have stayed in the Barbary Tent all weekend and been happy. David Cross’ standup with openers Michelle Buteau and Chris Garcia was, not surprisingly, standing-room only. But Cross was actually kind of disappointing: His long, detailed description of getting a colonic was gross, and amusing, but not nearly as hysterical as New York comedian Buteau, whose delivery was just as funny as her bits about being the lone black girl in Utah and watching black sitcoms to make herself feel better. Not all the bits resonated with the overwhelmingly white audience, as she pointed out, but we thought it was hilarious.

As for the headliners, Beck’s performance was solid but seemed somewhat phoned in, Foo Fighters were high-energy and everything you would expect them to be, and Neil Young & Crazy Horse showed that age is not a factor when it comes to rocking out.

Meanwhile, over on the smaller Panhandle Stage, Washed Out’s Ernest Greene held court over a modest but decent crowd with his dancey-but-not-douchey electronic music. There’s something about it that’s at once sad, lonely, and life-affirming — and made us feel like dancing was something elemental and compulsive and not merely drug-induced.

After the freezing fogginess of Friday, Saturday’s slightly more moderate temperatures were a welcome (albeit brief) respite. The sun’s heat radiated through the clouds and down on Zola Jesus, aka singer Nika Roza Danilova, who was the first act on the main Polo Field stage. The 23-year-old’s powerful voice and groundedness belie her age, and also make her a joy to watch. Occasionally, she let the giddy young person inside her take over the otherwise serious gothic-electronica persona she’s got going on, skipping barefooted around the diamond-shaped stage, and hopping down onto the grass to high-five fans.

Australia’s Tame Impala followed that up with a blistering set of throwback dreamy pscyh-rock. It could have easily been a highlight of the day, but we jogged over to see locals Geographer perform on the opposite end of the park, and kinda wished we hadn’t. Although the band’s electro-pop is catchy, fun, and totally inoffensive, it also wasn’t the deepest of musical experiences.

A surprisingly great set came from Father John Misty, aka former Fleet Foxes drummer J. Tillman, over on the Panhandle Stage. If that name conjures any negative emotions from you, don’t let it: Tillman’s performance was electrifying, befitting his bold Americana-ish rock sound, as his lithe body flailed in the fog, seemingly inhabited by some other (warmer) life force.

The reunion performance of Grandaddy was another highlight of the weekend. The Modesto guys played “Hewlett’s Daughter” and “Now It’s On,” amongst other old-school space-rock gems, as if it hadn’t been dormant for the last six years. Everyone rocked like it was 2001.

If fireballs and light shows are your thing, then Metallica’s headlining performance would have been the pinnacle of your Outside Lands experience, which it most definitely was for the older metalheads who came out for the show, plus some likely new converts. The band tore through a set of classics like “Ride the Lightning,” “Master of Puppets,” and “One,” plus more recent material.

That set couldn’t have been more different than Sigur Rós’ on the opposite end of the park, with its epic, orchestral rock and light show that had the effect of transporting listeners to some far-off place where you reflect on life’s trying experiences and how you’ve overcome them. Despite being cold and tired, there was no place we would have rather been.

It’s to be expected that Sunday ticketholders fritter most of the afternoon away waiting for the headliner. A combination of heavy fog and a spotty main stage lineup (Jack White — yay! Regina Spektor — meh) guaranteed that this Sunday would be no exception. Add to that a slight delay between the sound and video synching, which had been perfectly engineered to capture all of Metallica’s E-minor power chords the night before. It wasn’t until about 4:30 p.m. that things started to really pick up.

But then the festival improved precipitously. The real turning point, unsurprisingly, happened at the Panhandle Stage, where Berkeley-generated, Los Angeles-based act Electric Guest unleashed its bubbly, burbly ear candy for an audience of perhaps a couple hundred. Singer Asa Taccone spawned from a well-entrenched Berkeley arts dynasty (his father is Berkeley Repertory Theatre Artistic Director Tony Taccone, and his brother, Jorma Taccone, is a writer for Saturday Night Live and a member of sketch-comedy troupe The Lonely Island), and he has an adorable alto to boot — it’s several pitches deeper than Justin Bieber, though he occasionally veers into falsetto range. The band’s most popular song, “This Head I Hold,” is a self-conscious homage to Fifties doo-wop and Phil Spector girl groups. It’s buoyed by slick production from Danger Mouse (aka Brian Burton), who was hanging out quietly backstage.

Santigold, who took the Twin Peaks stage around 5 p.m., was a much-anticipated festival highlight. For those who’ve ogled the worldish dancehall-fusion singer on YouTube, she’s much better live — that owes both to high production values and the fact that “dancehall-fusion,” a scary combination on paper, is electrifying onstage. Her set involved several costume changes, two extremely fly backup dancers, a drummer and bassist dressed as Queen of Hearts sentries (or foot soldiers with “modified foreign legion hats,” as one observer shrewdly pointed out), and an opportunity for audience members to get onstage, which seemed like a bold move, by Outside Lands standards. Fortunately, the festival crew is so competent that all of her antics went off without a hitch: “Okay, put them in a corner,” Santigold ordered a stagehand, as two particularly ardent fans climbed up for the last number. “I don’t want you fucking with what my girls got going on,” she said, gesturing offhandedly to the chorus line. Then she smiled. “But do your thing — dance.”

Stevie Wonder came on at about 7:30 p.m., and from the looks of it, pretty much everybody in the park migrated over to the Lands End stage to watch him (Wonder’s only competition was “brostep” DJ Skrillex). And here’s where we have to confess that we stopped tweeting and taking notes, because the final set was so dazzling. Wonder, who hit the news cycle last week after filing divorce papers to end eleven years of marriage with Kai Millard Morris, is back in full form. His set, performed with three stiletto-heeled backup singers and a funk band that included Bay Area keyboardist Victoria Theodore, quickly devolved into Stevie Wonder karaoke. Audience members who didn’t own all of Wonder’s Motown LPs — and most of them probably did not — could easily sing along to the choruses of “Superstition,” “Isn’t She Lovely,” and “I Just Called to Say I Love You.” The singer didn’t seem to have an encore prepared — instead, he led the band in what sounded like an impromptu version of The Temptations’ “My Girl.” It was transcendent.