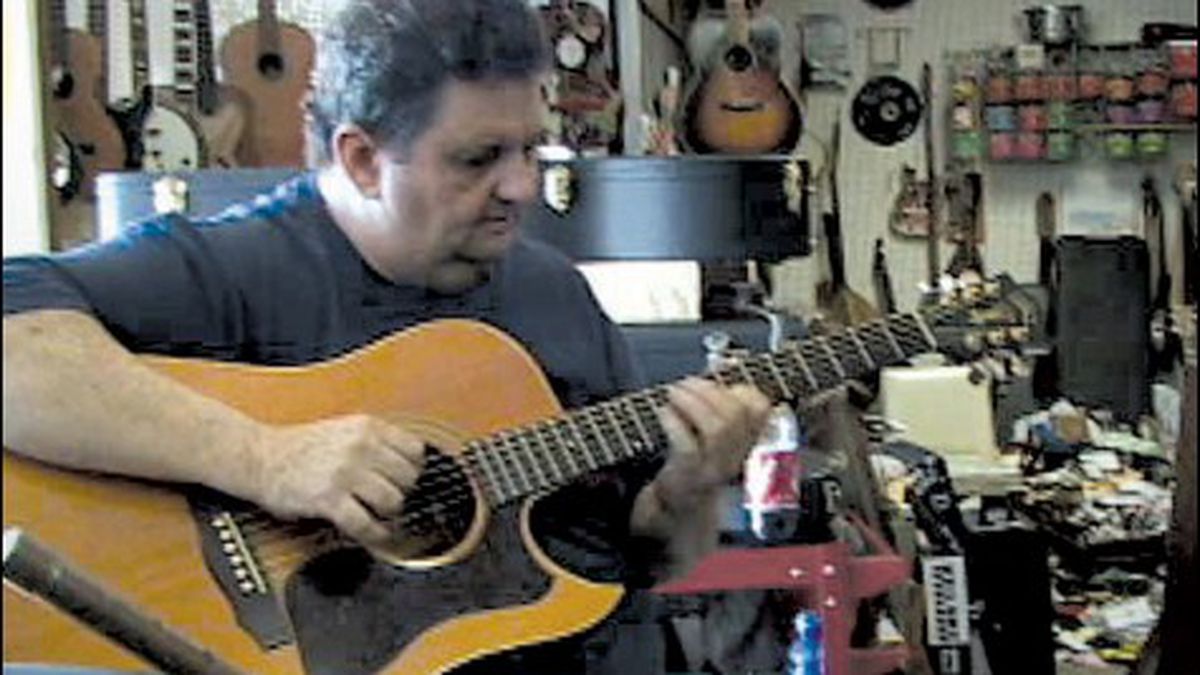 A Loss to the East Bay Music Community

When a bicyclist was fatally stuck by a car on April 30 in Oakland, the East Bay music community suffered a loss. Peter Webster, owner of Guitar O Rama, wasn’t your average musician, repairman, or salesman: He held an encyclopedic knowledge of music and instruments, was a skilled guitarist and craftsman, and was a friend and confidante to many.

Those who knew him called him a “compassionate teacher and mentor,” a “genius” who “loved to talk” about anything and everything (especially conspiracy theories, in which he believed many), was “engaging,” a “tinker,” and an “odd duck.” He was the sole owner and worker at Guitar O Rama, his tiny cluttered shop on Telegraph Avenue between 61st and 62nd streets, which sold instruments, amps, and gear, and served as a sort of community center and repair shop for East Bay musicians — including Country Joe McDonald, who called the sixty-year-old Webster “an eccentric but brilliant guy” who he loved talking to. He also said that Jackson Browne was known to buy guitars from his store when he passed through town.

“This is just a huge loss for the East Bay music community,” said friend Richard Berman, an Oakland-based writer and musician. “There are probably hundreds or thousands of people whose instruments he worked on. I liked him and I miss him.”

Being an accomplished guitarist, Webster also played with various local musicians, including Brian Glaze. “We’d go to see concerts,” Glaze recalled. “He played in my band, Brian Glaze. We played a bunch of shows at the Stork Club or Cafe du Nord. … He’s on all three of my records on Birdman [Records] that Greg Ashley produced. … We went and saw Devendra Banhart. He was hip to stuff before other people.”

Though many talked fondly of Webster, few knew many details about his background. McDonald said he had been getting his guitars repaired by Webster for fifteen years and considered him a friend, but called Webster “a mystery.”

Apparently, Webster was born in Los Angeles and lived in San Diego for a while, but moved around in his youth for unknown reasons, according to another friend, Richard Boling. The son of television writers, Webster lived briefly in England and Australia — as well as Toronto, according to Berman. Though Webster had two sons, not many people would know that fact until having been acquainted with him for years. Apparently, they were estranged.

Several of Webster’s friends say that he had been talking about retiring and moving to Chile for a while. But another friend says he had a different plan up his sleeve: going back to college. Musician Darnell Myles, who goes by the moniker Myles D., played with Webster in a church band at Calvary Christian Center in Alameda. “He was actually going to bring his music store to a close in Berkeley because he wanted to go back to college,” said Myles. “Pete was a very private man.” Myles said that he was planning to attend an out-of-state Bible college and get involved in their music program. “He would often say, ‘Hey Myles, I’m not going to be around much longer. I’m going to be moving on.’ I thought he was moving out of town, not leaving this earth.”

A memorial for Webster will be held on Saturday, May 15, at 2 p.m. at Calvary Christian Center (1516 Grand St., Alameda). The memorial is open to the public.

The Bay Area’s world-famous pirate radio station, Pirate Cat Radio, is back on the air, but you’ll have to be a migrant worker or Google millionaire to tune in to its signal.

The Federal Communications Commission kicked the fourteen-year-old radio station, housed in San Francisco’s Mission district, off the air in 2009 and fined it $10,000 for illegal broadcasts on 87.9 FM. But Pirate Cat has returned on 89.3 FM KPDO in Pescadero, a chic farm community 49 miles south of its cafe/studio in San Francisco. A group in Pescadero heard of Pirate Cat’s plight and effectively donated a 300-watt radio license to Pirate Cat. Perhaps 3,000 farm workers, Google execs, and aging hippies can get the radio signal in their cars and houses, while thousands more continue to stream the station each week from PirateCatRadio.com.

Station director Monkey (legal name) started Pirate Cat Radio in Los Gatos as a teenager. Amid unprecedented corporate consolidation of the airwaves, Monkey illegally broadcast throughout college in Santa Cruz and for a time in Los Angeles. He opened Pirate Cat Radio’s Mission headquarters and cafe in 2008, broadcasting at 87.9 FM and drawing the likes of No Reservations star Anthony Bourdain, as well as countless artists and activists. The FCC soon followed.

During litigation for his FCC fine, Monkey’s lawyer informed him of an opportunity to go legal. KPDO’s license was being contested. Pirate Cat Radio quickly made a proposal to license owner Celeste Warden, chair of the nonprofit Pescadero Public Radio Service: let Pirate Cat run community programming in Pescadero. Warden made Monkey 50 percent owner of the license for free. By comparison, the last radio station to change hands in the Bay Area, Energy 92.7, went for several millions of dollars in 2009.

Pirate Cat has lined up eight local radio shows at the new station, hosted by the mayor of Pescadero and a local Unitarian pastor, among others, and augmented by remote broadcasts from the Pirate Cat Radio cafe and studio in the Mission. The station has just signed a five-year lease at its SF location. Pirate Cat Radio programming now reaches into La Honda, the small town that’s home to Neil Young and was made famous by author Ken Kesey and Tom Wolfe‘s The Electric Kool-Aid Acid Test.

Monkey, who paid for the project out of pocket, says reopening KPDO would not have been possible without donated gear from engineers at KOIT, KALW, and KDFC, as well as the donated time and energy of the Pirate Cat Radio’s all-volunteer staff of DJs and interns.

Apple to Shut Down Lala

Apple will shut down Lala on May 31 and is not taking any new users, according to an announcement on its web site. As reported by Bloomberg, Apple bought Lala in December for $193.3 million. The site allowed users to listen to more than 8 million songs once for free, or to stream unlimited songs for 10 cents apiece. Subscribers also could upload their music libraries and access the songs through a web browser on any device. It’s believed that Apple wants to use Lala’s cloud-based distribution technology for a future online version of iTunes, which Information Week says will be released in June. The site also reports that Lala will refund the money people spent on songs for unlimited streaming. As the Express reported last month, Berkeley-based company Mog also is trying to cash in on the cloud-music concept. Currently, iTunes only allows users to download music to a computer.

Sleep to Reunite This Fall

Famed San Jose stoner/doom band Sleep will reunite this fall to play a string of shows, according to High on Fire‘s publicist, Carl Schultz. The band, which was active from 1990 to 1998 and reunited last May for All Tomorrow’s Parties music festival in England, featured current High on Fire frontman/guitarist Matt Pike, bassist Al Cisneros (Om, Shrinebuilder, and Asbestosdeath), and drummer Chris Hakius (Asbestosdeath, Om, The Sabians).

The reunited band (with drummer Jason Roeder of Neurosis) will play all of Holy Mountain at this year’s All Tomorrow’s Parties in New York on September 4, along with Sonic Youth, Iggy and the Stooges, Mudhoney, Sunn 0))) and Boris, Tortoise, The Brian Jonestown Massacre, Fuck Buttons, locals Sleepy Sun, and more. No other dates for Sleep have been announced yet, but the band may play select dates in Chicago, Los Angeles, San Francisco, and Austin.

SFJAZZ announced last week it has plans to build its first permanent home and the West Coast’s first facility dedicated to jazz music and education. The 35,000-square-foot center will be built in San Francisco’s Hayes Valley, thanks to an anonymous $20 million donation. (The organization plans to raise another $60 million.) It will include a 700-seat auditorium, rehearsal studios, a black-box theater, digital lab, and restaurant/cafe. Groundbreaking is scheduled for summer 2011. … Dates for the third annual Outside Lands Music & Arts Festival have been set for August 14 and 15 in Golden Gate Park. The artist lineup for the festival will be announced June 1. … The tenth annual Oakland Youth Talent Show will take place on May 14 at the Scottish Rite Center, featuring dance, poetry, music, and stage performances, plus appearances by San Perez, Son Malik, Jesus Diaz, Son Alex, and John Santos and the Quenepas Youth Ensemble. … Spike Jonze, Goapele, and Fool’s Gold will be among the performers and speakers at DAWN 2010, an event held at the California Academy of Sciences on Saturday, May 15, in celebration of the Jewish holiday Shavuot. … The Regency Ballroom was tagged by British street artist Banksy on May 1. The picture is of a “Glam Rat” wearing Bootsy Collins-style star glass in gold glitter with the anarchy symbol in purple glitter. … And at the top of our CD stack: Jim Campilongo, Orange; Bassekou Kouyate & Ngoni Ba, I Speak Fula; Hacienda, Big Red & Barbacoa; Walter Schreifels, An Open Letter to the Scene; Triptykon, Triptkyon.