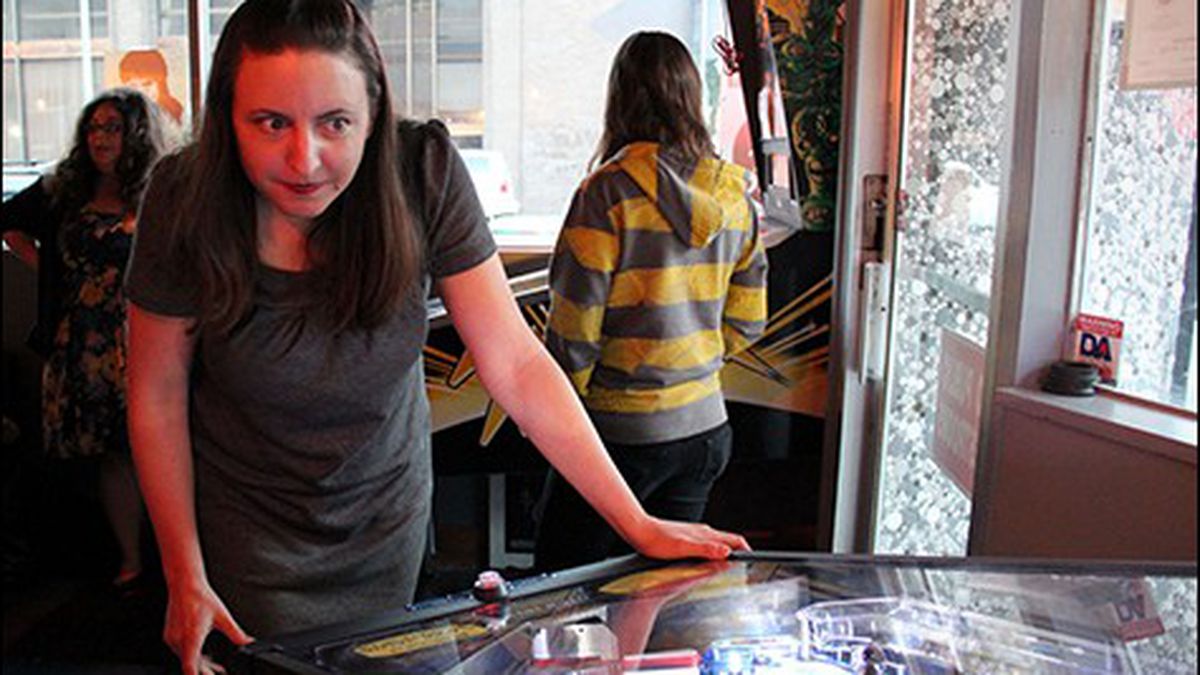 A League of Their Own

Oakland's Belles and Chimes is the first women's-only pinball league.

Of the six pinball machines in the dark upstairs rooms of the pizza joint Hi-Life in downtown Oakland, Nina G. prefers Batman Dark Knight. The local comedian can rack up 17 million points by dodging the Scarecrow’s Crane or fighting the Joker as easily as the Batman himself, while the average player, at best, can only pick up a couple of million. It’s her game.

In the minutes before a Sunday night meeting of Belles and Chimes, Oakland’s women-only pinball league, you can find Nina whapping away at the machine’s flippers, stomping her boots whenever the ball doesn’t go her way.

Nina is one of about thirty women who’ve attended one of Belles and Chimes’ meetings since the league was established a few months ago. The group’s founder is a woman Nina refers to as the “Gloria Steinem of pinball”: Echa Schneider (who also used to run the local news blog A Better Oakland).

Apparently, pinball’s gender issues extend beyond the bikini-clad babes featured in the artwork of certain machines. The top 25 players in the world, according to the International Flipper Pinball Association, are all dudes. And for female pinball players in the Bay Area, the male-dominated pastime can be, at times, unapproachable.

In the year since Schneider started playing pinball competitively, the Oakland resident has attended a lot of competitions and league events. Usually, she’s one of only a few women there. “I don’t believe that women are not interested in pinball, but it is very intimidating for women to go by themselves to very male-dominated, very competitive environments,” Schneider said.

So she started her own club, offering a friendlier, more supportive environment for women looking to combo. Currently, Belles and Chimes is the only all-women pinball league in the world that Schneider knows of, although it’s already spawned fledgling imitators in Seattle and Norway.

Women pay $10 dues for the privilege of being an official Belles and Chimes member (and to pay for trophies and refreshments at the season’s finale in December), but newbies can play for free at their first meeting (not counting quarters for the machines). Each meeting has attracted more than a dozen players of all skill levels, from as far away as Marin County. Some of the women haven’t played pinball since they were a kid, while others have only occasionally sacrificed a few quarters when they spot a machine at a bar. Some have made the rounds in the local leagues, and at least one member has her own personal pinball machine collection.

Belles and Chimes’ inaugural season began in September, and meetings have been held on Sunday evenings and Monday nights. Schneider opens the gatherings with announcements, including a list of area tournaments. She asks the attendees to introduce themselves with a pinball-related icebreaker, like listing their all-time favorite machines. At a recent meeting, she also passed around cards for the players with November birthdays.

Then players break up into groups of three or four, splitting multiplayer games on three different machines. The highest scorer at each machine is awarded a certain number of points, with fewer points given for second place, and so on. When each group is finished, they reassemble into new ones for a second round. The woman with the top total score at the end of the night is the winner — Schneider took the title at last week’s meeting.

While other male-dominated leagues might group players according to skill level, Belles and Chimes is more egalitarian. While there are still winners and losers, Schneider tries to de-emphasize the competitive spirit. “I think it’s really important, especially for beginning players, in terms of improving your pinball skills, to watch more experienced players,” she said. “It really makes you better to play with a wide variety of people.”

Preschool teacher Sally Sparks has been playing pinball her whole life, but she’s only a few years into her competitive career. She met Schneider through coed leagues and local tournaments, and when Sparks first heard about Belles and Chimes, she said she was psyched by the idea of an all-women’s game. “Naturally, if there’s going to be a girls’ pinball league, I’m going to be there,” she said.

Sparks is a pinball wizard who usually prefers to play alone, and she feels a lot of eyes on her when playing with men — not in a sexual sense, but in a competitive, cutthroat kind of way. “With all the guys, it just feels really uncomfortable sometimes, and I just never really feel like I’m playing my best when I’m around them,” she said. “They’re competitive, they’re really in it to win it, and I get really overwhelmed.”

At a Belles and Chimes meeting, the competition is friendlier, and the ribbing is more good-natured and less aggressive than what some Belles and Chimes members say they’ve dealt with in coed leagues. “I think a lot of women respond to the fact that it’s just really about the social environment … and teaching each other tricks,” Sparks said. “I feel like I play really well around the girls, the ladies. I think other women have been responding to that, too.”

Belles and Chimes will end its season with a party at the Pacific Pinball Museum on December 8. The next season is tentatively planned to start early next year, but in the meantime Schneider plans to organize some informal meet-ups around the Bay Area. She’s pretty excited to experiment with different playing formats, like a split-flipper event.

Yeah, that means one player on each flipper. The possibilities are endless.

For more information on Belles and Chimes, contact BellesandChimesPinball.com or [email protected]

A version of this story, with audio and a slideshow, also appears on OaklandNorth.net