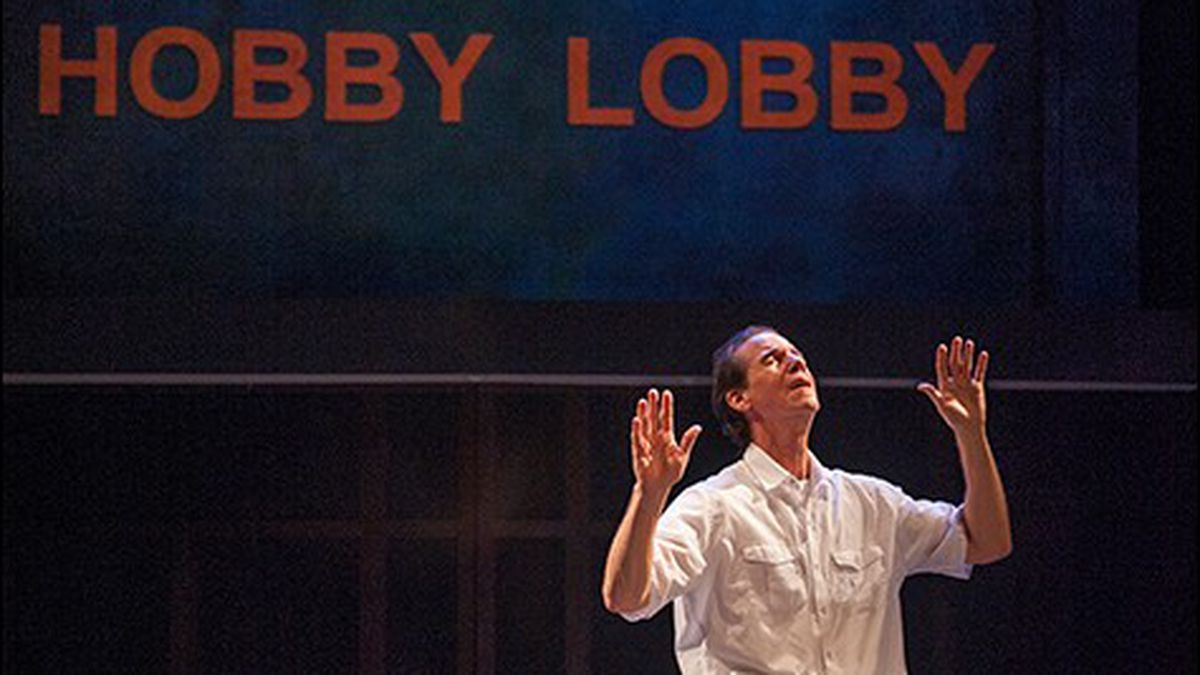 Despite best intentions, it doesn't lead us to the promised land.

Here’s a startling statistic: According to the Pew Research Center, 41 percent of Americans believe that Jesus Christ will return to Earth by 2050 to kick off the end times eternal damnation party, aka The Rapture. That’s more than 128 million people who are “Rapture ready.” Granted, those numbers are probably smaller here in the Bay Area — Rapture websites don’t look too fondly on our ilk; one even claims we spend our time luring angels to orgies in its FAQ on homosexuality: “The men of Sodom even tried to seduce the angels that were sent! (Sounds like San Francisco.)” While we may not encounter too many Rapture rhapsodizers on our trips to Berkeley Bowl, fundamentalism is on many Americans’ minds, and is the topic of A Bright New Boise, which is now in production at Aurora Theatre Company.

Written by native Idahoan Samuel D. Hunter (The Whale, The Few) and directed by Aurora’s Artistic Director Tom Ross (This Is How It Goes, A Delicate Balance), Boise takes place almost entirely in the breakroom of a conservative Christian-owned Hobby Lobby arts and crafts store. Will (Robert Parsons), a soft-spoken man in his early forties, has fled his hometown up north due to a tragic scandal involving his evangelical church (and possible cult). He comes to Hobby Lobby to reconnect with his teenage son Alex (Daniel Petzold), whom he gave up for adoption when he was a baby, before the Day of Reckoning. Meanwhile, his eclectic co-workers Pauline (Gwen Loeb), Anna (Megan Trout), and Alex’s brother Leroy (Patrick Russell), have a thing or two to teach Will about life here on Earth.

It’s an interesting twist, to make the protagonist an affable former Christian cult member, and indeed the vast majority of the play is spent convincing us that people are far more complex than they seem, and to question our insta-judgment of those whose beliefs differ from our own, even radically so. Hunter, who went to a fundamentalist Christian high school and worked at a Walmart for a time, appears to know much about fundamentalists, and strives to challenge our assumptions of them, to “explore what it’s like to live with these beliefs in a constantly modernizing world,” as is noted in the playbill. And yet, after we’ve spent all this time with Will and his earnest, sweet, and shy attempts to bond with his son and co-workers, Hunter reaffirms that he is very much the unredeemable wackadoo we would expect him to be at first glance. Once Will’s “true” nature comes to light, the entire play feels like a set-up, an elaborate “gotcha!” moment that reinforces the social notions and stereotypes Boise is fighting against.

Being duped in this manner doesn’t wholly detract from the perceptive, poppy dialogue and waggish cast, whose neuroses are digressive and delightful, especially the acerbic store manager Pauline; the painfully awkward Michael Cera-esque Anna; and the willful, protective Leroy, who tries to spin his Hobby Lobby jobby as a piece of subversive performance art, and whose interrogations of Will get some of the biggest laughs. Alex’s adolescent bereftness is both endearing and shocking. Petzold portrays his malaise, frequent panic attacks, and threats of suicide with stinging breeziness and maturity.

But as we’re being entertained by the funny, if gawky, interactions of disgruntled Big Box workers, it’s not enough to wrest us from the unanswered questions the play poses and then forgets about. Will’s final fall from grace feels like the biggest letdown, an easy out when viewed through the lens of the play’s central premise — that belief in an apocalyptic Rapture is motivated by how meaningless life is. In the play’s two-hour run, Will has multiple chances to live and be the father he so desperately wants to be, not just with Alex, but with another son figure from his former church. Instead of stepping up to the plate when the chance beckons him, he instead retreats into Rapture-esque fantasy, shouting “now!” perpetually skyward and letting those he cares about slip away, in one case, forever. Once our protagonist is deemed looney tunes, what’s left for audience members to believe in?

“Without God, I’m just a terrible father who works in a Hobby Lobby and lives in his car. There’s got to be more,” says Will. Boise lacks this essential more-ness. Yet, despite the stellar cast and remarkably realistic staging of corporate breakroom soullessness, that something more will have to wait for another day, or another play, at least.

Your Daily Lick: Tempo No Tempo

Don’t Screw Around with Spring