Banks are increasingly foreclosing on property owners without actually taking control of the houses, thereby making them magnets for blight. 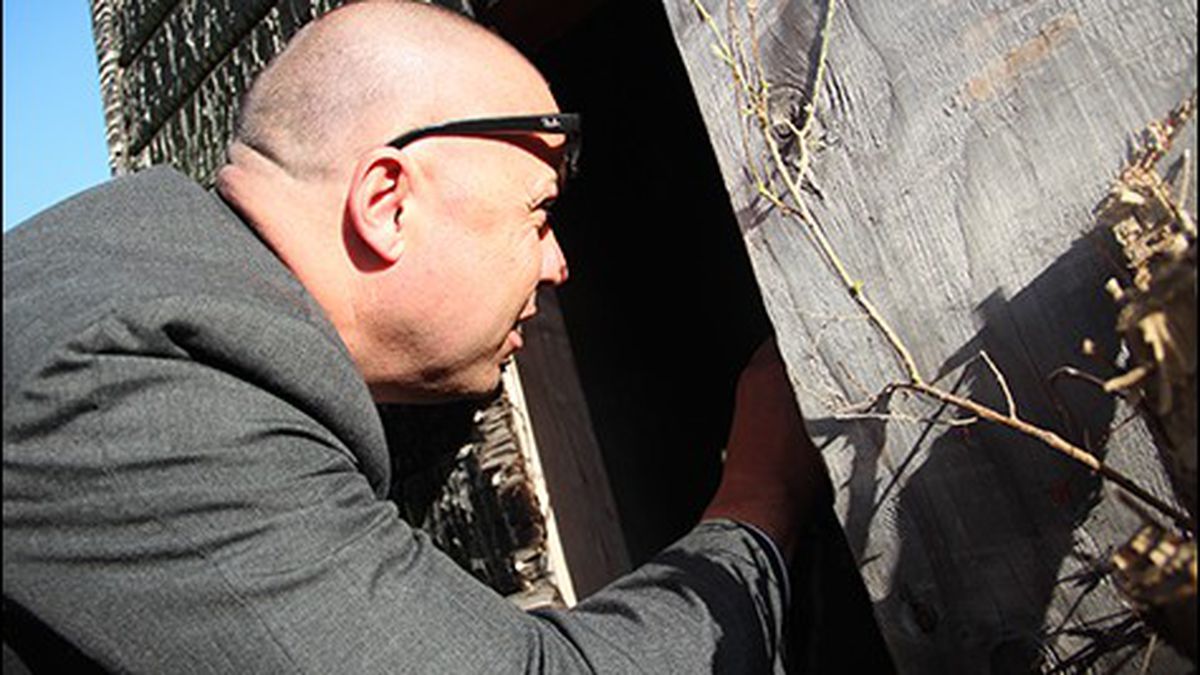 Jose Rodriguez, a stocky auto mechanic from Jalisco, Mexico, has been squatting in a vacant home in Richmond’s Iron Triangle for the past four months. “I like this property. I’ve already spent $5,000 repairing it,” Rodriguez told Richmond police officers last week, as they were kicking him out in order to demolish the site. “I didn’t do anything wrong.”

Rodriguez had transformed the roughly 1,000-square-foot property on First Street. On the front portion of it, he built an outdoor kitchen and equipped it with a working stove and stocked pantry. He also encased the perimeter of the property with a particleboard fence, and painted a bright portrait of the Virgin Mary on the wall of the abandoned home in which he had taken up residence. “If I have to pay to get the house, I’ll do it,” he said. “I don’t want to sleep in the streets.”

Rodriguez was occupying one of the many so-called “zombie foreclosure” sites in Richmond. Typically, these are properties in which a bank has sent a notice of foreclosure to the homeowner, along with a sale date. The owner then vacates the home thinking he or she has lost it. But if the property doesn’t sell at auction, the bank delays finalizing the foreclosure, forcing the previous owner to shoulder all the liability that comes with owning an abandoned home. And such properties have become a source of blight in neighborhoods.

Meanwhile, people like Rodriguez have taken advantage of the banks’ actions. While the home he occupies is slated for demolition, he shouldn’t have a hard time finding another abandoned one to squat in. There are currently 432 homes in some form of foreclosure in Richmond, according to RealtyTrac, an online marketplace of foreclosed and defaulted homes. And of all the foreclosed properties in Contra Costa County, 13 percent are zombies.

“I began working here back when the foreclosure crisis started, but this is an even bigger crisis,” said Tim Higares, manager of Richmond’s Code Enforcement Unit, which is in charge of cleaning up blight. “These [zombie] homes are sitting in purgatory, and the city is left to figure out what to do with them.”

Historically, foreclosures have been a relatively quick and straightforward process. The bank would send a foreclosure notice to the homeowner, and shortly thereafter the property would either be sold at auction or taken over by the bank. This made it fairly simple for the City of Richmond to manage foreclosed properties. If a vacant home fell into disrepair, code enforcement officers would contact the bank that owned it and demand that it fix the problems. If the bank refused, then the city would begin levying fines.

But over the past few years, banks have been dragging out the foreclosure process, allowing them to avoid becoming the owner of the property, and skirting their legal obligation to maintain foreclosed homes. In California, the average amount of time it takes banks to finalize foreclosures after mailing the initial public foreclosure notice has more than doubled since 2007 — from 154 days to 383 days — according to RealtyTrac. As a result, there were more than 29,000 zombie titles in California as of March.

In Richmond, this has left the city responsible for maintaining scores of abandoned homes that have no clear owner. While code enforcement officers could cite the previous owners, who are technically liable, they by and large avoid doing so. “There’s no easy solution right now for zombie properties,” Higares said. “And they destabilize neighborhoods.”

Jake Lawlor, who lives in Richmond’s North East neighborhood with his wife and sixteen-month-old daughter, has watched a zombie home adjacent to his deteriorate over the past two years. “It’s not exactly falling apart, but it is super overgrown; it has a drab, peeling paint job,” he said.

In the meantime, the parcel attracted waves of squatters. “Not knowing who’s in that house at any given time is unnerving,” Lawlor said. “The entire neighborhood is a little on edge about it, we just really want to get that place boarded up, or sold, or demolished, or something.”

Code enforcement fixed the property a few weeks ago — two years after receiving the initial complaint from Lawlor. However, the city is still dealing with countless properties that are stuck in limbo. “We’re one of the best equipped code enforcement offices in California, but we could double our staff and we would still just be able to scratch the surface of the problem,” Higares said.

The federal department of Housing and Urban Development estimates that one foreclosed home costs a local government $19,277 a year — mostly in maintenance costs and lost tax revenue. Using these estimates, the 432 homes currently in foreclosure in Richmond could cost the city nearly $8.3 million this year. And that figure doesn’t consider the economic impact on nearby homeowners. It also doesn’t measure the social impacts of widespread foreclosures. “There’s a strong, proven connection between blight and crime,” said Richmond Police Chief Chris Magnus. “When a neighborhood looks like it doesn’t care, it’s more likely to have drug dealing, prostitution, and break-ins.”

In 2008, the Richmond City Council passed an ordinance allowing the city to collect $1,000 a day from banks that failed to maintain their foreclosed properties after receiving a thirty-day notice. Between 2011 and 2012, these fees brought in nearly $1 million for the code enforcement unit, according to its records. The unit has an annual budget of about $4.5 million, so the fees represented a considerable source of revenue.

However, as banks have stopped finalizing foreclosures, revenue from these fees has plummeted. “The amount of money we were able to collect from the banks was almost insignificant this year,” Higares said.

Some industry experts say that avoiding maintenance fees is just one of the many economic incentives for banks to stall foreclosures, especially in low-income areas. “If you look at the numbers, it would cost more to foreclose than it would not to in some cases, because of all the costs associated with the foreclosure process,” said Darin Blomquist, vice president of RealtyTrac. In fact, the foreclosure costs end up being “way above and beyond what they could recoup by selling the property,” he said.

A 2010 Federal Reserve paper also noted that when banks stall foreclosures, they can “obtain whatever insurance or accounting benefit is available by documenting the loss,” without having to maintain the vacant property. Also, keeping foreclosures off the books allows banks to borrow and lend more money, since foreclosures count as a liability against them.

Keeping homes out of foreclosure also boosts local property values because there are then fewer houses for sale on the market. The lack of inventory can cause a feeding frenzy among potential buyers who outbid each other for homes. “It’s part of the incredible manipulation of the market that we have right now,” said Maeve Elise Brown, executive director of Housing and Economic Rights Advocates. “You have entities that are trying to show inventory … in drips and drops … because they want to artificially prop up prices.”

Meanwhile, the previous owners of zombie properties can be stuck with all of the legal responsibilities. Some cities threaten the title-holders with jail time if they don’t bring their parcels into compliance. Other “unsuspecting homeowners have had their wages garnished, their credit destroyed, and their tax refunds seized,” Reuters reported earlier this year. “You still have liability, whether it’s squatters breaking in, weeds that are three feet high, or a person falling and hurting themselves,” Brown said. “You just don’t know it until somebody comes after you.”

Kevin Gould, senior vice president of the California Association of Bankers, said the reasons that banks are taking longer to foreclose properties have more to do with state and federal regulations than financial incentives. Gould also said that whenever a foreclosure sale is postponed, banks notify the previous homeowner.

However, Brown said that doesn’t always happen, and that zombie foreclosures can haunt homeowners for years. “The servicers or lenders are simply postponing the inevitable for their own gain,” Brown said. Meanwhile, “they’re also postponing the ability for a homeowner to recover.”

Property owners who are worried that they’re still the title-holder of a zombie property — even though the bank issued a foreclosure notice — do have some options though. Scott Schang, manager of Broadview Mortgage in Southern California, said the first step is to call the lender and ask what the status of the property is. “There are quite a few stories of people coming back and saying the banks were very cooperative,” he said. If you’re still the title-holder, Schang recommends finding a real estate agent and initiating a short-sale process, in order to get off the title. Richmond police encourages any city residents concerned about blighted properties to contact code enforcement at 510-231-3043.

Previous ArticleGot a Complaint or Comment About the 51 Bus Line? Come to These Meetings:

Next ArticleWednesday Must Reads: Obama to Nominate UC Berkeley Prof to Run the Fed; California’s Response to Obamacare Called “Phenomenal”