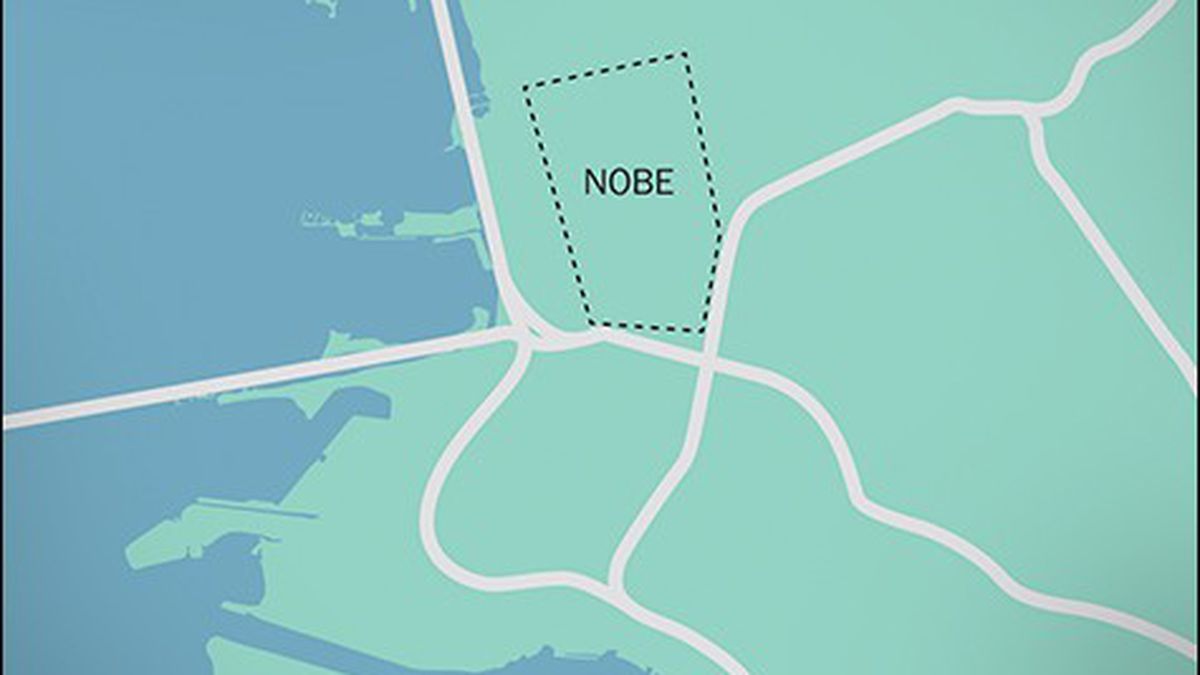 The rise of the "NOBE" label for an area that includes sections of North Oakland, South Berkeley, and Emeryville has sparked a backlash from neighborhood groups and intensified tensions around gentrification.

It wasn’t too difficult for employees to scrape off, and while it was certainly an inconvenience for owner Sal Bednarz, it was a message that in some ways resonates with him. “It’s the sort of thing that really polarizes the neighborhood,” Bednarz, who has owned the Oakland business for nearly four years, said of the word “NOBE.” He is not a fan.

The acronym, which has led to at least one high-profile dispute between neighborhood groups and a real estate company, stands for North Oakland Berkeley Emeryville. It’s a term real estate agents invented and one that has spread rapidly on real estate websites and listings over the last year. For some, however, the acronym has come to represent gentrification, a controversial term that many people are hesitant to even utter out loud.

“I do everything I can to try and preserve what I think is great about this neighborhood,” said Bednarz, noting that the introduction of NOBE has increased concerns around gentrification. “It’s an interesting place. It will continue to be an interesting place, regardless of what real estate agents do. There are enough people here who give a crap.”

His business sits squarely in the middle of the so-called NOBE district, which Bay Area real estate agents say includes the 94608, 94609, and 94703 zip codes. It’s unclear who first came up with the idea and when, but it’s widely understood to be used primarily, if not solely, as a marketing tool to attract well-off homebuyers and renters.

Linnette Edwards, a broker with Better Homes and Gardens, first used NOBE in a listing last February, advertising a property on 39th Street. She was not the first to do so, but she eventually received the most attention for it — and not the kind she wanted. After Edwards published a promotional video centered on the appeal of NOBE, organizers with Phat Beets Produce, a local food justice group, posted their own video, titled “Neighbors Outing Blatant Exploitation,” countering each part of her pitch and outlining some of the negative consequences of the redevelopment of poor, urban neighborhoods. Max Cadji, an organizer with the group, said Phat Beets was dragged into the debate when Edwards touted the group in her marketing materials. (After the group’s complaints, she eventually removed all references to Phat Beets and took down the video.)

“From a purely practical standpoint, advertising a property that is for sale as being at the junction of North Oakland, Berkeley, and Emeryville is cumbersome when you only have a few hundred words to call attention to the unique features of a particular property,” Edwards wrote in an email to me. Her company also runs the website NOBEneighborhood.com, which promotes a neighborhood “coveted by professionals, hipsters and families alike for its central location, cultural diversity, great climate and homes with choice architectural details and high walkability.”

Cadji said this kind of labeling is an obvious ploy to gloss over the history of the area and make it sound more appealing to wealthier outsiders. “There’s a stigma with certain neighborhoods,” he said. “Realtors start using terms like ‘friendly, revitalization, walkability, hip, vegan restaurants!’ Whenever you hear all these things, what they are saying is, ‘Don’t worry, the area is being transformed and it is safe for people who are not from here.’ It’s code words for saying, ‘This is a place for affluent people.'”

The Phat Beets video stated that NOBE is not, as Edwards claimed, a “best-kept secret,” but rather an area that was the birthplace of the Black Panther Party and one that, more recently, has seen a high rate of foreclosures — a trend that has forced many low-income Oakland residents out of their homes. Some people laugh at the term, but these kinds of efforts to gentrify poorer communities can have serious consequences, Cadji argued. “It’s not natural. It hurts a lot of people.”

Edwards emphasized that NOBE is not meant to erase existing names. “I want people to know that I appreciate and respect the storied history and unique qualities of neighborhoods such as Golden Gate and Longfellow,” she wrote, later adding, “I think the real issue may be that people dislike that their neighborhood is changing for reasons they feel are out of their control. They are angry that many of their friends and neighbors have lost their homes to foreclosure, and they become anxious when what once was familiar no longer is so.”

Median sale prices have increased rapidly in the NOBE zip codes, according to data that ZipRealty, a local firm, provided to the Express. In Emeryville’s 94608, the price jumped 37 percent from summer 2012 to summer 2013, with the median home price now at $385,000. Over that same period in 94609, which includes parts of North Oakland, the price skyrocketed a whopping 59 percent. (In 94703, which covers parts of South Berkeley, the increase was only 5 percent; the median sale price across Oakland jumped 76 percent).

The criticism some agents have faced is “outrageous,” said Ward. “The idea is to talk about the neighborhood, so there is a vernacular around it, so people understand what you are talking about. … Sometimes when a neighborhood gets named, it can be better for its overall future.”

Despite these kinds of initiatives, NOBE remains unknown to many. South Berkeley Councilman Max Anderson, whose district overlaps with NOBE, said he had never heard of it. The term was also foreign to Mike Voisenat, owner of Moxy Beer Garden on Sacramento Street in Berkeley, which opened in April, and reflects the kind of business activity real estate agents like to cite. He refers to his area as the Lorin district. “On the whole, people are happy restaurateurs are taking the risk,” he said of the neighborhood. Ben Feldman, program director of the Ecology Center Farmers’ Market — which has been operating on Tuesdays in South Berkeley since last summer — also did not know the acronym, despite the fact that his market is one of the selling points on the NOBE neighborhood website.

“It’s definitely an area of Berkeley and Oakland that doesn’t have great access to fresh fruits and vegetables,” he said. “We’re glad to hear that people are excited to have us there.”

Robert Arias, editor and founder of the Emeryville blog The E’ville Eye, said that he has only used NOBE in the context of the controversy surrounding it, including an interview he did with Edwards. He also said that some Emeryville residents recognize that big-box retailers are part of his city’s identity and growth. Personally, he added, “I’m not offended by [NOBE]. It’s perfectly within their rights as business people to try and use it. It’s up to citizens to reject it or embrace it.”

Sam Levin
Previous articleGot a Complaint or Comment About the 51 Bus Line? Come to These Meetings:
Next articleWednesday Must Reads: Obama to Nominate UC Berkeley Prof to Run the Fed; California’s Response to Obamacare Called “Phenomenal”
18,645FansLike
0FollowersFollow
66,470FollowersFollow