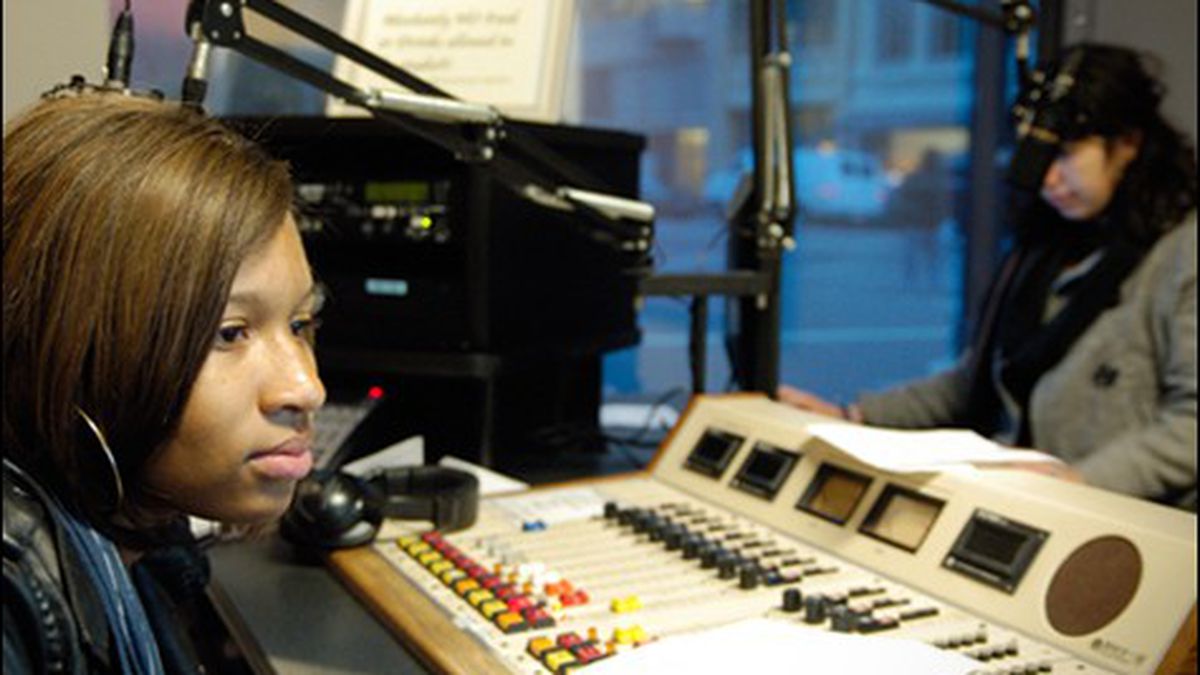 Youth Radio Beyond the Airwaves

Almost two decades in, the Oakland organization is giving kids the tools to create content — and possibly revolutionizing public media in the process

The intersection of 17th and Broadway in Oakland Uptown is wide and flat, dotted with neon-lit jewelry repair shops, a coin exchange, and, a bit further down the block, Oaksterdam University. It’s an unexceptional site for the epicenter of the youth media movement and the silver bullet that could save public broadcasting, but Ellin O’Leary and her colleagues at Youth Radio have been doing both for the past nineteen years.

Youth Radio was founded in Berkeley in 1991 with the goal of providing young people, largely from disadvantaged backgrounds and underserved schools, with the tools to produce news reports and essays for the radio. After being accepted into the program, participants learn reporting skills and production techniques; those who stick with it can become paid interns. It was a novel idea at the time — placing a diverse group of young people behind the microphone and in the mixing booth to produce stories that would go on local and national public radio — but in the years since, youth media has exploded, and similar outlets have popped up all over the country. For its part, Youth Radio has grown from a tiny storefront operation at a busy downtown Berkeley intersection to a Peabody-winning news organization with more than 100 employees and 1,200 participants annually. This transformation was recently the subject of a book, Drop That Knowledge, chronicling the organization’s history and written by Youth Radio’s Research Director and Senior Producer Elisabeth Soep and San Francisco State University professor Vivian Chavez. The organization will be hosting a release party for the book, which is published by UC Press, on Thursday, September 16.

In May 2007, Youth Radio moved to its new facility in Oakland, a 20,000-square-foot building with jewel-colored ruby and emerald walls and state-of-the-art computer equipment. The physical move signaled a seismic shift in the organization’s ambitions and abilities. According to Senior Producer Nashat Kurwa, while the Berkeley studio was almost entirely broadcast-oriented, the new space has allowed Youth Radio to advance technically with the installation of a converged media production studio capable of creating video and online content. To underscore this growth, the organization officially changed its name to Youth Media International. The scope of its services has also swelled considerably — what was founded simply as a media education program has broadened to become a multipronged community center. In addition to a slate of media production classes and workshops — which are empowering in and of themselves — the organization now offers yoga and kickboxing classes for all participants and staff; has launched a healthy-eating initiative with a fully functional student-run kitchen; employs six health educators with specialties like teen dating violence prevention; and offers a suite of case management, academic advising, and college and career counseling services. Last fall, it hosted a Thanksgiving meal in its basement kitchen, as many of the program’s participants come from families where a traditional holiday celebration can’t happen. According to Executive Director Jacinda Abcarian, a graduate of the program herself, the media component of the program provides a way to get kids in the door. “Media is wildly appealing,” she observed. But once kids are in, Abcarian and her staff work to foster community and provide support for the program’s participants.

Perhaps the biggest shift Youth Radio has seen in its nineteen-year history isn’t within the organization itself but with the media climate that surrounds it. Technological advances have made the tools of production much more widely available, and journalism as a field has conspicuously shrunk and changed shape in recent years. Where public radio outlets once resigned themselves to the fact that it was an exercise in futility to court teen, twentysomething, and thirtysomething media producers — and, consequently, listeners — O’Leary said that Youth Radio has always strived to reach that demographic. “There was this idea that there’s a limit on how many younger people you can get into public media,” she said. In the past, Jurwa said, youth-created public media was almost always relegated to sidebars or what she calls “explainers” — stories that broke down youth cultural phenomena for older audiences. “We didn’t have our own outlet,” she said.

But according to O’Leary, she and her colleagues saw the deficiency in this model. “If this is public media — as in, the tax dollars — it has to represent the public,” she said. “There has to be something between Sesame Street and stuff for forty-year-olds.” So they got younger folks into media by allowing them to create it themselves, and in the process presented a vision of public media that was much younger and markedly more diverse than National Public Radio. And what may once have been regarded as high-minded and unrealistic — that young people can and should be driving public media — is starting to look like smart business strategy: With the age of NPR’s median listener hovering around fifty, public media has no choice but to let young people in. “What was ‘youth media’ — kind of a nonprofit-y thing off to the side — is now what’s driving media in general,” O’Leary said. What was once a do-gooder-y niche market is now public media’s greatest hope for survival.

Indeed, the Corporation for Public Broadcasting recently gave Youth Radio a $2 million grant to give new media talent a space to grow and gain exposure. In November, the organization will be soft-launching an ambitious new project: an online news service oriented toward 18- to 34-year olds with an emphasis on original and investigative reporting and emerging talent.

“Now it’s all about cultivating that association between public media and different audiences,” Kurwa said. “We’re well-positioned to be that bridge.”