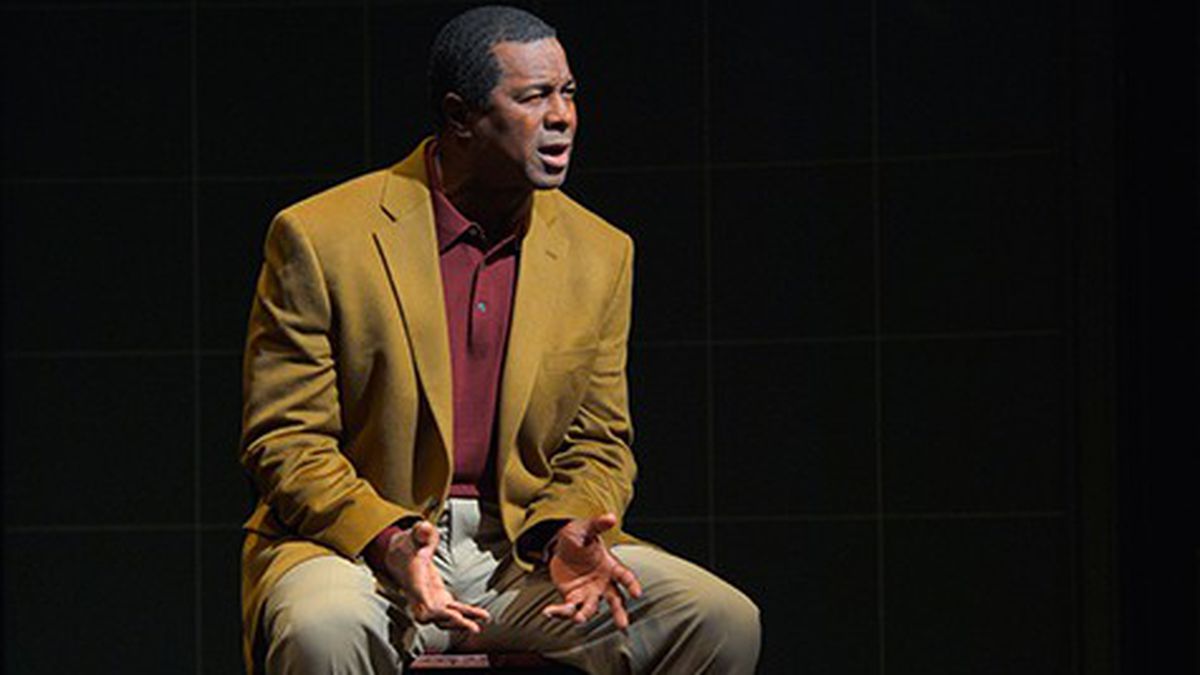 The short show offers a compelling look at traumatic brain injuries and America’s most popular sport.

Despite baseball’s catchy songs about peanuts and consistent post-World Series riots, for the past several decades, football has long been America’s most popular sport. The most recent Super Bowl (XLIX) was the most-watched television program in US history (as it has been since 2010), this year averaging 114 million viewers.

Yet despite its popularity, it seems like almost every week some new scandal befalls the game — whether it’s Deflategate, Ray Rice punching his then-fiancée in the face, openly gay player Michael Sam being dropped from the Rams, or, as Berkeley Rep’s fantastic show X’s and O’s (A Football Love Story) illuminates, just how common it is for its players to experience traumatic, life-altering brain injuries.

Playwright KJ Sanchez — whose company American Records is known for its documentary-style theater productions — collaborated with actress and writer Jenny Mercein, who also plays several of the characters, to bring to life this fascinating, often tragic look at America’s favorite game.

Mercein (whose father is Chuck Mercein, of Green Bay Packers fame) and Sanchez conducted more than fifty interviews with players both past and present, as well as families, neurologists, coaches, fans, and other experts. And indeed, much of the play’s dialogue comes verbatim from said interviews. Adding to the stories are a timeline of the NFL’s history (which is quite riveting, despite being peppered with misogyny, racism, and Teddy Roosevelt’s weird speeches about virility), as well as video montages and a subplot involving three football fans and their heated, differing viewpoints. Even the “Monday Night Football” theme song makes an appearance. All of these elements give the production greater heft, adding context and making for a livelier tale than a straightforward documentary might. With the help of Tony Taccone’s fluent direction, a slick, ESPN-type set design, and a short runtime (85 minutes), X’s and O’s paints a complicated portrait of both the light and dark sides of the sport.

The cast may be small — and includes Dwight Hicks, a former safety for the San Francisco 49ers, as well as Bill Geisslinger, Anthony Holiday, Eddie Ray Jackson, and Marilee Talkington — but it’s thoroughly winning and its collective heart is enormous. Mercein and Sanchez did not shy away from exposing the NFL’s exploitative practices (at least when it came to brain injuries. Don’t come looking for too much on say, the NFL’s plight with domestic violence, homophobia, or how the hell it gets away with being classified as a nonprofit), and the psychological toll that injuries take, not just on the players, but for their families as well — damage that many aren’t even aware of until years later.

The most affecting scene comes toward the end, when two former players’ wives (played by Talkington and Mercein) and a son (Jackson) chronicle the heart-wrenching declines of the men they loved. Through compelling, interwoven narratives, the family members reveal the disorientation and fear that result from traumatic brain injuries, such as mood swings, memory loss, suicide risks, and personality changes — the connection between which had been downplayed and covered up for years.

Indeed, it wasn’t until 2005 that the degenerative disease known as CTE (chronic traumatic encephalopathy) came to light, after Dr. Bennet Omalu released his findings from an autopsy performed on Pittsburgh Steeler “Iron Mike” Webster, who died at fifty, and whose brain mirrored that of a much older man. The NFL tried to discredit Omalu’s research, but failed. Of the subsequent autopsies in ensuing years on deceased former players, 76 out of 79 showed evidence of CTE, and the NFL was forced to make (some) changes to address the issue.

Though X’s and O’s provides a blunt assessment of some of the NFL’s shadier practices, the play asks far more questions than it answers, preferring to not make any sweeping statements or gestures, which results in the tiniest of letdowns. But, as its parenthetical title notes, X’s and O’s is a love story at its core, and thus offers just a small narrative slice of the sport’s underlying problems. Regardless, it’s an engrossing and illuminating juxtaposition, and one of the most innovative theater shows I’ve seen in a long time.