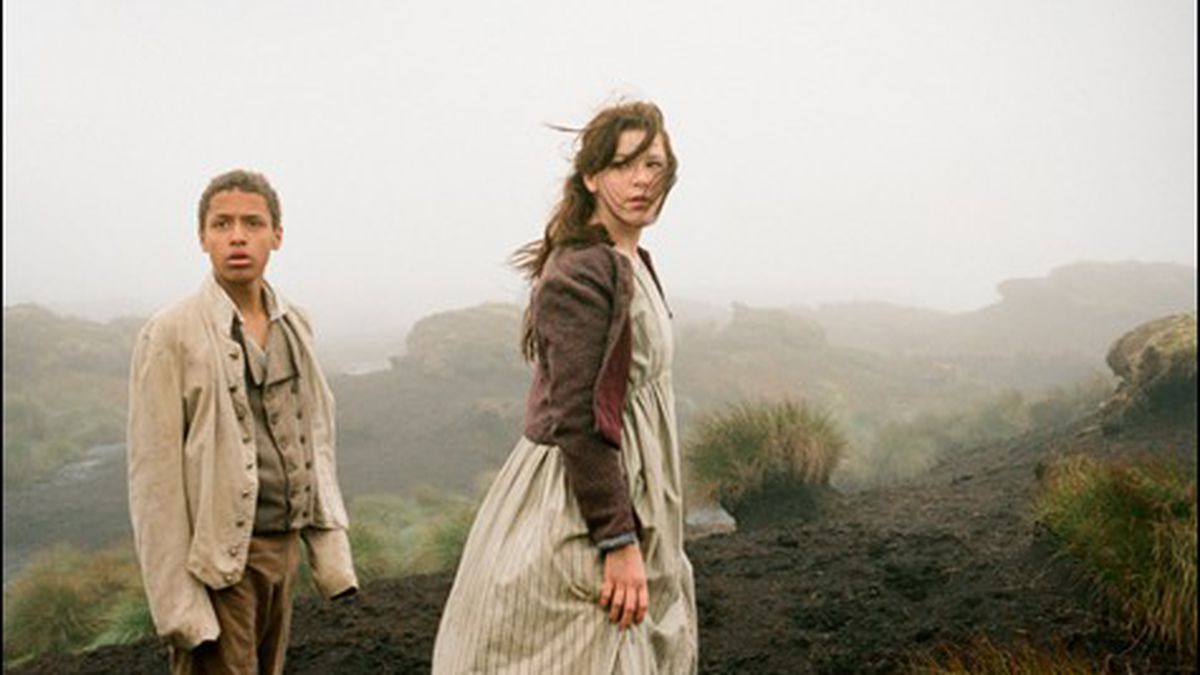 A new kind of Heathcliff.

Emily Brontë’s Wuthering Heights, the epitome of brooding English melodrama, has been adapted numerous times for the screen, all too often as a fudged-over doomed romance with the rocks and craggy faces of the novel’s Northern England terrain doing the heavy lifting. Everyone remembers William Wyler’s 1939 Hollywood version because of Laurence Olivier and Merle Oberon’s rapturous intensity, and there were honest attempts by director Robert Fuest in 1970, with Timothy Dalton and Anna Calder-Marshall; and in 1992, with Ralph Fiennes and Juliette Binoche, directed by Peter Kosminksy.

But there has never been a Wuthering Heights like the new one by filmmaker Andrea Arnold. In its scope, its ambition, its social conscience, and its raw, electric daring, Arnold’s film reinvents Brontë’s 1847 tragedy as if it had never been filmed before, from the damp ground up.

First and foremost in the overturning of everything we thought we knew about Wuthering is the character of Heathcliff, the foundling boy who brings such anguish to the Yorkshire Dales, and to himself. In most adaptations, Heathcliff is explained as a “dark-eyed Gypsy” type foisted upon the Earnshaw family through the misunderstood charity of the religious Mr. Earnshaw (here played by Paul Hilton), father of young Cathy (Shannon Beer) and her envious brother Hindley (Lee Shaw). This Heathcliff (unforgettably portrayed by Solomon Glave, a young first-time actor from Sheffield) is a transplanted black African brought to the farm from the docks of Liverpool, the major slaving port of its day. Did kindly old man Earnshaw purchase him? We never learn the truth, and Heathcliff’s alternatively cruel and kind childhood soon renders the details irrelevant.

The work is hard and sunlight is a precious commodity on the moors. Every modest advance the thoughtful but willful young Heathcliff makes is met with violence by Hindley, but also by quiet encouragement from Cathy. The dark boy and the pale girl grow into soul mates. Years later, when the adult Heathcliff (James Howson), now a gentleman, returns to Wuthering Heights to reclaim his one true love (Kaya Scodelario) only to find her married to a rich neighbor named Edgar Linton (James Northcote), the story blossoms out into that luxuriant hopelessness that has entranced readers for years. Along the way, we meet a variety of mean-faced English country folk and learn the unfortunate lay of the land.

Filmmaker Arnold is no stranger to the turf. Her Fishtank (2009) telescoped the smothered hopes of thousands of working-class housing estate kids in the UK into the person of a teenage girl named Mia, whose defiance takes the form of dancing. Cathy and Heathcliff perform their own mating dance, a careful gavotte of give and take, but it’s always punctuated by kicks and curses. Seething passion with a tight lid on. Sparse dialogue, natural lighting, the ever-present whistle of wind and rain on the soundtrack, a sensual bareback ride on Heathcliff’s horse, ditch-digging, a band playing “The Coventry Carol” at Christmas, and off-key ballads sung in the dark (“Barbara Allen,” “Black Is the Color of My True Love’s Hair”). The film has a visceral sense of the land and its people. Olivier, however, probably would have hated Arnold’s screenplay, written with Olivia Hetreed — no chance to speechify. Is all this a metaphor for UK race relations? Oh, if you must. But we’d rather just hang on tight for the ride with the two star-crossed lovers.

The actors, most of them amateurs, obviously bring a lot of themselves to their roles. Heathcliff (at both stages) frequently boils over, pawing the ground. It’s not in him to be meek, but she melts him, she alone. “I could no more forget you than myself,” he confides. “When you’re at peace I’ll be in hell.” Meanwhile, Cathy is the eternal unknowable. Writer-director Arnold nurtures their fevered affair with a pitchfork, but it’s a tender pitchfork with tines of flowering wood, and in the Big Scene Atop the Heights they bond, roughly. This dank, impetuous, stormy Wuthering Heights is clearly one of the very best movies of 2012 — one to stand with Cary Fukunaga’s Jane Eyre in the Brontë sweepstakes, but somehow purer, cleaner, more naturalistic, altogether more tormented, never an easy piece of light entertainment. Miss it at your peril.