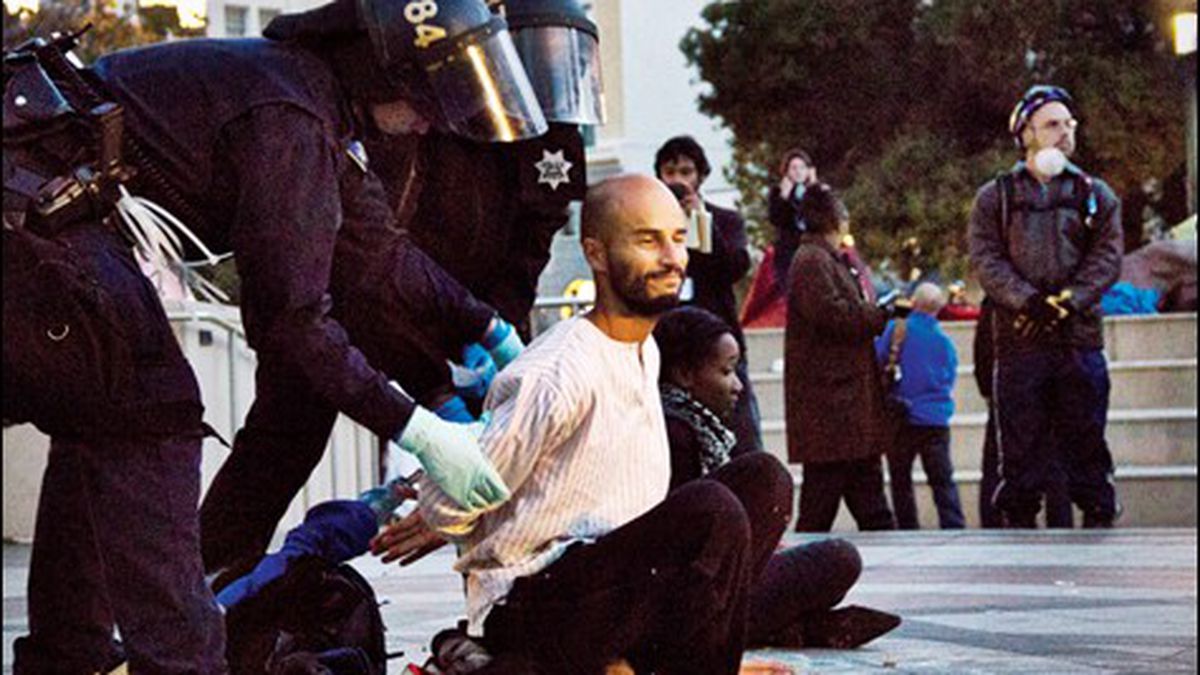 A newly formed caucus hopes to show young occupiers that nonviolence is effective — and not passive. Nonviolent protesters have already proved their effectiveness in Occupy protests.

From the outside, Occupy Oakland appears to be one large organization. But there are at least 25 active committees working under the Occupy Oakland umbrella, and each generally acts on its own volition — unless it needs the backing of the entire coalition. For example, there’s the Labor Solidarity Committee, which has raised fists with union brethren at the Union City Red Vine factory and Castlewood Country Club in Pleasanton, or the Brooms Collective, which has helped clean blighted areas of West Oakland, most recently at St. Andrew’s Park.

There’s also a recently formed committee that could help shift the local Occupy narrative — as portrayed in the media — away from street protesters clashing with police. It’s the nonviolence caucus, and it was created in early February by activists who were not involved in the back-and-forth between police and protesters. The new committee includes members of the Interfaith group, whose representatives discussed the detention of protesters with city officials in January when demonstrators tried to occupy City Hall.

Generally, the goal of the nonviolence caucus is to provide strategic nonviolent direct action training and education to activists and groups who are interested. Ultimately, the caucus would like to have a solid nonviolent presence within Occupy Oakland. Caucus members also believe that nonviolence will shift media focus away from the few number of protesters who destroy property. Nonviolent action “shows where the violence is really coming from, which is the police,” said Nichola Torbett, an Occupy Oakland participant and nonviolent direct action trainer.

From the perspective of Zann Zsuzsannik, a marriage counselor who is also a nonviolence trainer, the government has the power to swiftly crush a movement, but that can only happen if movement members play into the hands of police and politicians who love nothing more than having images of people smashing windows or tossing rocks at cops dominating the narrative. “It’s more dangerous for [politicians and police] for protesters to be nonviolent,” she explained.

Far from being a passive act of resistance, Zsuzsannik said that putting one’s body on the line to shut down offices or government buildings and to be a buffer between police and protesters is both active and disruptive to business as usual. For example, Occupy SF protesters shut down a Bank of America on November 17 by sitting down inside and refusing to leave. Although 95 people were arrested, the bank was shut down for hours.

For some East Bay protesters, however, nonviolence has become a dirty word, because of generational differences between the largely civil rights-era activists who have seen nonviolent protests work, and the pissed-off younger generation who have seen the youth of other countries take to the streets and fight back against police. For many youths nonviolence implies pacifism. But for the older guard, it’s active resistance.

Melvin Kelley, a nineteen-year-old member of Occupy Oakland’s Tactical Action Committee, said he’s not against people participating in nonviolent actions, but he thinks times have changed. He pointed out that in America, clashing with police is met with disapproval, but in other places, like Greece and Egypt, such confrontations are expected. He thinks the movement in Oakland also has to look to the future, not the past. “That was their day and age,” he said. “This is our time.”

“We middle-aged activists are to blame for that,” Nicoloff said. “We have been relatively passive over the last forty years. Young activists are frustrated to hear people lecture them about nonviolence — then not put their bodies on the line.”

Nonviolent action, however, already has shaped the Occupy narrative in a way that is positive, even sympathetic, for protesters. Take the images of peaceful youth sitting cross-legged at UC Davis while Lieutenant John Pike pepper sprayed them, or the students at UC Berkeley who, with arms linked, tried to hold their ground as police jabbed and whacked them with batons. In those instances, the media narrative focused on police brutality and the government’s crackdown on nonviolent demonstrators.

Nonetheless, from the onset of Occupy Oakland, nonviolence advocates got push back from activists who didn’t want to sign a nonviolence resolution, even though other Occupy camps were doing so, said Samsarah Morgan, an Occupy Oakland participant who helped found the Children’s Village. Instead, Occupy Oakland embraced a concept called “diversity of tactics,” which first surfaced in the anti-globalization movement about a decade ago. It essentially allows protesters to engage in tactics of their choosing, from nonviolence to property destruction.

A nonviolent group broke away from the main camp at Frank Ogawa Plaza to found an “expansion” at Snow Park near Lake Merritt. Property destruction that followed an otherwise successful November 2 General Strike further polarized Occupy Oakland, Morgan said. That was when the nonviolent crowd started pulling back. “It was a shock to folks that there was such a push against [nonviolent action] and an embracing of diversity of tactics,” she said. “But people in support of nonviolence didn’t stand up when the time came.”

But after the mass arrests and street battles of January 28, there has been a renewed focus on tactics that will inspire more supporters to fight for social change. About sixty people have expressed interest in becoming involved with the caucus, organizers say, and there are a slew of nonviolent direct-action trainings in the works to prepare for the “99 Percent Spring,” a week-long event sponsored by many unions and activist groups, during which they hope to train 100,000 people for future actions. January 28 “reinvigorated the conversation about what nonviolence is as a political tactic and how it can be used,” Morgan said.

The first time the caucus took part in one of Occupy Oakland’s actions was during the Occupy the Prisons event on February 20 outside San Quentin State Prison. Close to a 1,000 people blasted music and delivered speeches outside the prison to call for an end to some of the more contentious correctional practices in California, including the three-strikes law and the death penalty. Organizers of the event wanted to make sure there wouldn’t be violence at the protest, so they called on the caucus to train protesters and help provide a buffer between police and demonstrators. During the event, a liaison mediated between police and protesters, keeping tensions low — and riot police out of view, though protesters say there were still officers watching from the hills near the prison (presumably snipers).

But the nonviolent caucus has received a mixed reception so far. For many, the caucus must prove that nonviolence can be an effective tool in disrupting the One Percent, while also satisfying Occupy Oakland’s taste for steady and active confrontation. The first step for all parties may be semantics — explaining that nonviolent direct action is not passive. “One of the reasons people don’t like using the nonviolent term is because it’s not possible to live in this society and be nonviolent — structural violence exists all the time,” Nicoloff said. “[But] nonviolence is really an active attempt to make that structural violence apparent.”