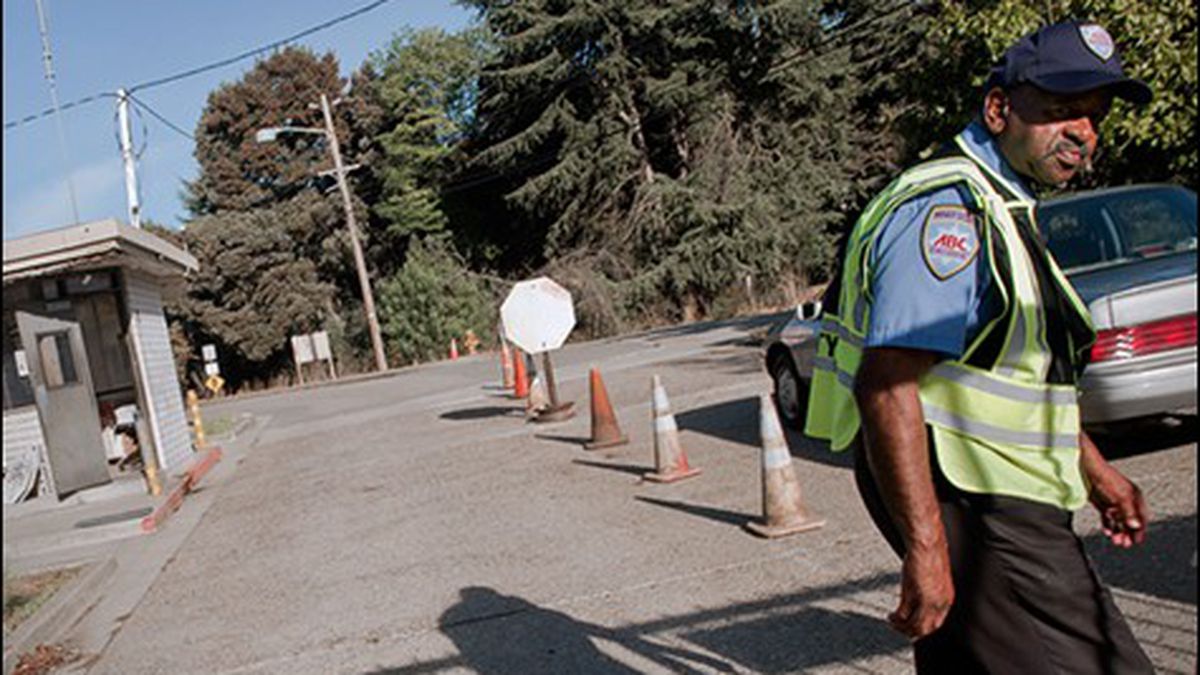 As the company prepares to exit bankruptcy, Oakland's city attorney is fighting to make it honor its commitments.

The crumbling rows of concrete stumps at Oak Knoll Naval Hospital stick out of the ground like gravestones, pale and perfectly arrayed as though the officers who once lived there are now buried below. In the distance, the eight-story shell of a hospital building might even make for a fine mausoleum were it not for the big, black graffiti announcing that “KIM IS A SLUT!” It’s a gravesite the city has been happy to see spring up — the tombstones were once foundations for the kind of ratty, abandoned tinderboxes that only copper thieves and amateur photographers enjoy. Now the shuttered base is cleaner and safer than it’s been in years, with security patrolling the site day and night and goats from Orinda’s Goats R Us keeping the coyote brush at bay.

Just a year ago, Oakland City Attorney John Russo called the 167-acre site “disgusting” — an asbestos-dusted dump tangled over with dead vegetation and debris, host to nearly a hundred half-wrecked wooden structures one lighting strike or lit match away from disaster. Spurred to action by angry Oak Knoll neighbors fearing a repeat of the 1991 Oakland hills firestorm at the bankrupt land venture, Russo and his office in October 2009 took on the stalled project’s developer, SunCal, and its financial backer, Lehman Brothers, wrenching millions of dollars for hazard abatement from a cash-flush subsidiary where Lehman was hiding its dough.

It was an unprecedented victory. No other public agency dealing with safety hazards and clean-up concerns at stalled SunCal sites had managed to take on the Lehman behemoth and leave with funds in hand. But Lehman appears determined to not let it happen again.

In its newest set of Chapter 11 plans for its California land ventures, the bank has introduced language that could prevent more than 85 other public agencies affected by 17 California projects affected by the bankruptcy case from enforcing their police powers at SunCal sites. Police powers — defined in the US Constitution as those powers not expressly delegated to the federal government, covering everything from planning and zoning to public safety — are exactly how Oakland got its foot in the Santa Ana courthouse door. Neither a creditor nor a debtor in the bankruptcy case, the city used its police powers to force the bankrupt entity to remedy its blights, tear down the fire hazards, and obey the law.

Now, as mortgage-lender Lehman pushes forward with a new set of plans and a seemingly expedited schedule — a November 5 court date slated as a hearing on disclosure statements for the plans has been upgraded to a hearing on the plans themselves — the bank is confounding public agencies statewide with language that the Oakland city attorney’s office believes is “inadequate,” “unclear,” and unlawful.

“Bankruptcy is not a get-out-of-obeying-the-law-free card,” Russo said. “It shields you from creditors but it doesn’t forgive you or absolve you from living up to the law like everybody else.”

Describing the plan that would cover Oak Knoll, Lehman sketches the terms of an injunction that would stop anyone holding a claim against the debtor, past or future, “including but not limited to states and other governmental units,” from “commencing or continuing in any manner any action or other proceeding;” “enforcing, attaching, executing, collecting or recovering in any manner any judgment, award, decree, or order;” or “creating, perfecting, or enforcing any Lien or encumbrance” against the relevant Lehman entities or those who might ultimately land the deed to Oak Knoll.

“If Lehman’s successful in this latest sneaky attempt, then in theory we could have a real mess on our hands for ten years,” said Donald Mitchell, a leader of the Oak Knoll neighbors who pushed the city to take on Lehman and SunCal. Freed from the basic requirements any developer must agree to in order to get its hands on the land, the current and future overseers of Oak Knoll could build to any density they desired, chop down as many trees as they wanted without securing tree removal permits, ignore traffic mitigation needs, suspend plans to knock down the crumbling hospital, and even decide to put the costly contractors of Goats R Us out to pasture.

“They’re going to be able to thumb their nose at Oakland,” Mitchell said.

Attorneys for Lehman did not respond to a request for comments. But Oakland agrees with Mitchell. In its formal challenge, the city said it objects to the injunction and release “given that the property still requires corrective work, and the plan cannot purport to preclude enforcement of police powers in an effort to avoid liability for the necessary corrective work.”

As of now, sources close to the city attorney’s office say officials are optimistic that such work, including continued abatement and the hospital demolition, will be fully funded by the time any plan goes into effect. In addition to the $4.3 million it wrangled from Lehman last year, the city has recently managed to secure even more funding, with the bank promising $542,000 toward further work.

The judge in the Southern California bankruptcy court handling the case — which involves seventeen bankrupt Lehman-SunCal real-estate projects and several investment entities — also has ordered a mid-December hearing to discuss funding an additional $2.1 million of cleanup work in the Oakland hills. This should bring the total funding to around $6.9 million and will cover continued abatement, removal of the concrete stumps of former buildings, and demolition of the eight-story eyesore that once served as a hospital.

That amount is “a little over what our original claim, without inflation added, requested,” wrote Deputy City Attorney Susan H. Mosk in an e-mail obtained by the Express. “That means we received almost 100 cents on the dollar in the bankruptcy court — something that rarely happens.”

Even if remedial work is finished before the plan goes into effect, attorneys for the city argue that on the most basic level, a plan “cannot eliminate the power of local and state law enforcement and other agencies from enforcing their police powers. Any attempt to preclude enforcement of property regulations creates significant policy problems.”

A list of the kinds of claims that could be washed away or prevented from ever being filed by such an injunction is featured in exhibit one of the plan covering Oak Knoll. It includes the abatement order that started the recovery at Oak Knoll as well as five health and safety notices served by Contra Costa County, the Bay Area Air Management District, and the California Regional Water Quality Control Board in their efforts to manage the East Bay’s other castoff SunCal project, Delta Coves, in northeast Contra Costa County.

That troubled development, a barren 310 acres of packed dirt and the skeletal beginnings of backyard boat slips, is a perfect example of the importance of police powers. The Bethel Island site — once so lacking in vegetation that SunCal contractors had to essentially glue down the ground with tackifier to prevent wind-borne sand from filling the gutters and inlets — has been a public safety headache for years. Shaped into a levee atop a sunken bowl, the site and its pump system could present a flood risk to neighbors should the land owner be freed from repair agreements. The county’s ongoing oversight of clean water, erosion control, and air quality with regard to the blowing sand will be nullified if Lehman gets its way.

Even with police powers intact, public agencies overseeing Delta Coves had to play hardball with SunCal to get the most basic environmental remediation completed, threatening the developer with fines and investigating ways to use bonds posted by the developer to get the work funded.

Contra Costa County has not filed an objection with the bankruptcy court, and counsel for the county declined to discuss the case. Whether the county is keeping an eye on what happens in the unexpectedly expedited hearing is unclear. But Contra Costa and other affected agencies are not alone in failing to get an objection registered. While Oakland, Los Angeles County, and one Southern California city and school district have each filed objections — with LA blasting both the injunction and release and Lehman’s scheme to wiggle out of paying the 18 percent yearly interest unpaid real estate taxes accrue — the overwhelming majority of public agencies have not.

“We don’t want the standard operating procedure for large real estate concerns who go bankrupt … to become that you can hold a bunch of real estate and then go bankrupt and then suddenly you don’t have to obey any local laws,” Russo said. “That’s a terrible outcome. Frankly, it’s an un-American outcome. It’s un-American.”

Whether the offending language remains intact will be determined in upcoming hearings. It isn’t the first time such an injunction and release has been inserted into a reorganization plan. In last year’s LandSource bankruptcy case, the attorney general successfully argued for the removal of similar terms that, the state argued, would have prevented toxic remediation at Mare Island in Vallejo and contravened the constitution. But removing it was not an easy fight: The state argued with plan proponent Barclays Bank and developer Lennar until the final day of hearings.

In her e-mail, deputy city attorney Mosk indicates that Oakland officials have spoken to attorneys for the court-appointed trustee in the case, Steven Speier, and that they, too, agree that the language should be removed. Reached for comment, one of those attorneys, Michael Neue, declined to address his take on the injunction and release, saying only that the matter will be resolved shortly in the courts.