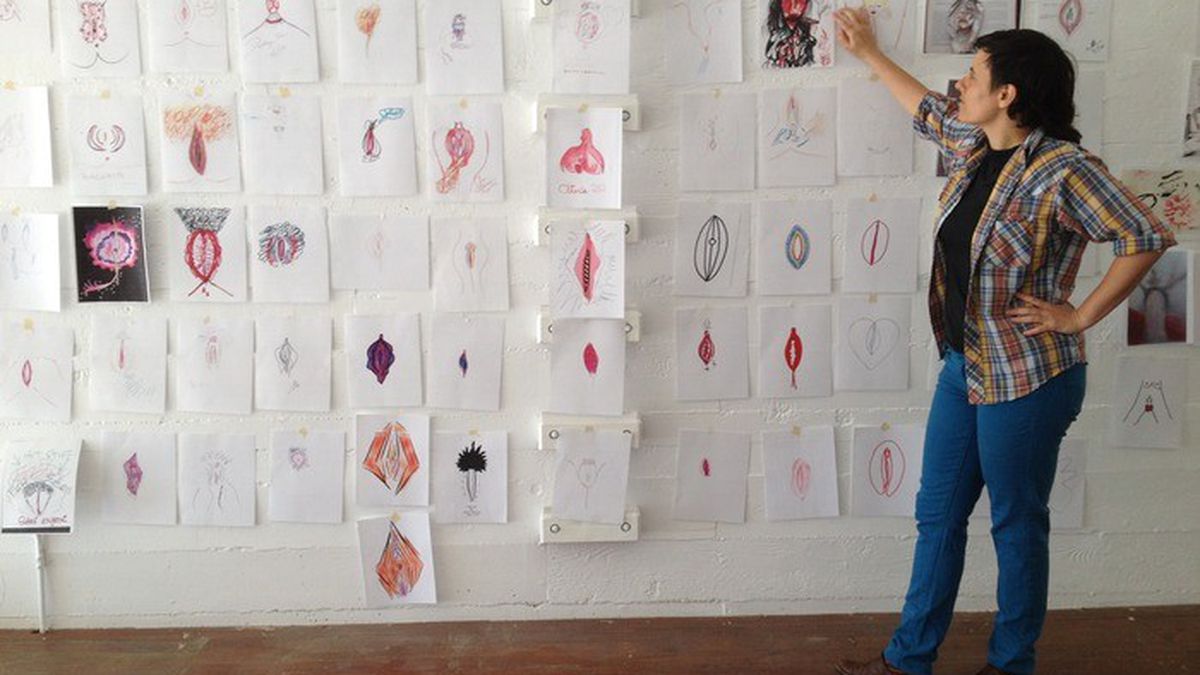 Why Gay Men Should Draw Vaginas

There’s a lot of apprehension about genitalia in our society, and two Bay Area artists have decided to confront that aversion in a humorous way. Oakland-based artist Shannon O’Malley and SF-based Keith Wilson are the creators of the soon-to-be book Gay Men Draw Vaginas. For the past three years, O’Malley and Wilson have asked gay men (or anyone who identifies as a “gay man” while drawing it) to illustrate his or her interpretation of a “vagina,” and now they’ve got roughly 1,000 images that they are planning to turn into a 220-page, full-color book. Raising the funds through Kickstarter, O’Malley and Wilson have already reached their printing goal of $37,000. Now they aiming higher to be order to make additional copies of the book. We talked with O’Malley about the project, the prevalence of the vagina dentata, and why Dan Savage should draw her a vagina.

[jump] AP: Per the “roast beef” story above, I was wondering if any of the drawings you’ve collected made you roll your eyes, or if they brought up any interesting conversations about misogyny?

SO: A lot of the drawings make me roll my eyes. But I’m not going to censor them. The project is about observing what we have found and showing it to people. … Mostly the conversations I’ve had concerning the project that relate to misogyny have been with Keith [Wilson]. We haven’t talked about it with many of the artists. Although, I did ask Brontez Purnell to draw one (and he did) and he told me I should take down the drawings with teeth. We got into a mild argument, and I was like “No way, we’re showing it. It’s not a representation of what I think about a vagina, or what Keith thinks. That’s just what one guy drew, and it represents a strain of sentiment in the culture. It’s real.”

AP: Vagina dentata is practically a classic. You can’t not show it.

SO: Right, can’t not show the dentata. It’s really cliche but so many of the guys drew something dentata-derivative.

AP: Do you have a favorite image?

SO: I have two different kinds of “favorites.” I like the Rubik’s cube for the execution and the idea, but not meaning. The Rubik’s cube says, “I struggle with this vagina and I can’t figure it out.” That’s the message, which to me is off-putting and goes along with what you’d expect a gay man to say. But, given that that’s the message the guy chose to communicate, it’s one of the most clever executions. It’s simple and easily “gettable.”


The other type of favorite I have is the kind I like more for the message and less for the execution.

AP: What kind of message?

SO: Early on, this nude man named Woody in the Castro drew a vag in the form of the Virgen de Guadalupe. But she was surrounded by fire. And another thing that’s interesting about this image is that in the drawing, her silhouette is kind of shaped like a penis.
There’s a lot going on in the drawing. I wouldn’t call it a “positive” or “negative” representation, it’s just thought-provoking. I actually still don’t know what I think about it.

AP: Do you have an ultimate goal for the book? Is it merely for entertainment? To provoke discussions?

SO: We think of Gay Men Draw Vaginas as a funny water-cooler conversation as much as we think of it as a gender studies or art history seminar topic. We hope it brings up questions like: How do people respond to discomfort or ambiguous expectations through art? What are the preconceptions we may have about what a “gay” man is or thinks? What are prevailing ideas or archetypes we layer on body parts — women’s bodies, in particular?

The project is fun, but it’s also a lot to think about. That’s part of why I think it’s gotten a lot of play. If you want to have a laugh and dismiss it as simple, you can.

SO: But if you bring a different approach to it, it can get you thinking in a lot of different directions.

AP: Totally. it certainly got me thinking about my own interpretations of vaginas.

SO: Oh yeah? And what did you think?

AP: Well my immediate thought was to draw some teeth! I think of the dentata as a form of empowerment, not scariness.

SO: Why “empowerment”? To me, the dentata archetype casts the woman as defensive. It assumes an enemy. No one draws a penis prepared for castration.
This line of thought has to do with popular representations of lesbians or queer women.

AP: True. But that seems like a reflection of our society.

SO: Yes. Dentata representations are related to how women, especially queer women, are represented. We are represented as “anti-men.” Whereas the gay man stands on his own, unconcerned with women. Like, for me, I don’t need a dentata because I am (mostly) unconcerned with men. My relationship to men does not define the way I think of my genitals.

SO: I hate that movie. It was a high-budget joke about this dentata archetype. … I haven’t done a lot of research, but the dentata idea is so clearly male-created.
No woman comes into the world thinking about her pussy as a fucking monster.

SO: The dentata concept was created by some man or some myth and now it’s been layered onto the collective female consciousness and we mostly just accept it as funny. I really hate it, actually. It’s someone else having a shitty idea about my body and making it really funny and popular.

AP: Yes, there was a list circulating a while ago with all the nicknames for a vagina and like two-thirds of them were negative or scary.

SO: Yeah, that’s awful. It’s hard to think about vag archetypes women might create in a vacuum without these misogynist ideas floating around.

AP: So what would your vag entail if you drew one?

SO: I’ve never thought about that. Huh. This is becoming a very intimate interview. … I don’t know, something awesome.

AP: OK, you can get back to me. While we’re on the subject, I hate the archetype of vags as flowers. There’s gotta be a better in-between — not just monsters and delicate plants.

SO: [Laughs] We have found lots of categories. I am particularly fond of the simple, abstract ones. Some guy drew a box with a hole in it. Another just drew a circle.
You can see a lot of our drawings on our InstaVag.

SO: That’s a great one. That was one of the first ones we got, from a designer colleague named Chris Cerrato. He’s very clever.

AP: Are you still collecting them? Can gay men still contribute?

SO: Yes, we are still collecting drawings, although the book is mostly laid out. I think we’re sending it to the printer in early September. We’re being pretty picky about what we include in the book, but if people want to be on our InstaVag and Facebook, bring it! Right now I’m obsessed with getting Dan Savage to draw one.

AP: Oh, he should! And if you had to give people one reason to get involved with the project, what would it be?

SO: If you like to think about puss, gay things, and art, then this book is for you.