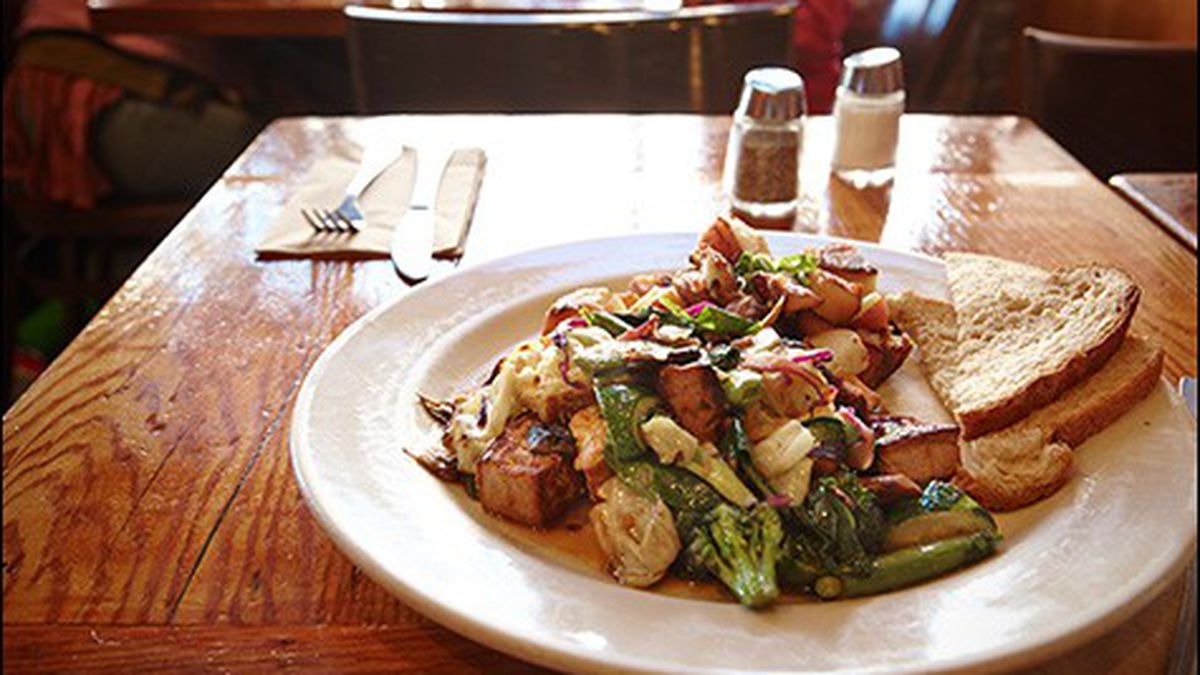 Where Vegans and Meat-Eaters Happily Coexist

It’s not hard to find a decent vegetarian or vegan restaurant in the Bay Area, but where can meat-lovers, cheese-loving vegetarians, and vegans peacefully coexist? It can be challenging to find a place that can serve a group with many, varying dietary needs — a joint where no one will feel alienated, grossed out, or starving by the end of the meal.

We surveyed knowledgeable chefs and vegan foodies to come up with five of the best East Bay spots where eaters with a wide range of dietary proclivities can be satisfied.

Ethiopian food is known for its plentiful vegetarian options. But if you need proof that Café Colucci is a good choice for vegans and non-vegans alike, look no further than its patrons. Owner and founder Fetlework Tefferi said that about half of her customers are meat-eaters, while the other half are vegetarians. (All of the restaurant’s vegetarian dishes are vegan as well.)

The vegan dishes are prepared separately from the meat dishes, and they can be served on the same tray (divided by a barrier of lettuce) or on separate plates (upon request). For every veggie dish, such as sautéed eggplant and collard greens, Café Colucci offers a tasty meat equivalent, like finely minced beef and sautéed lamb.

The communal style of Ethiopian dining brings together carnivores and vegans in a way few other cuisines do, Tefferi said. “There is harmony with the meat lovers and vegans.”

When it comes to breakfast, brunch, and lunch, few restaurants offer as many tasty vegan and meat options as Venus, the slow-food restaurant located in downtown Berkeley. According to manager Sam Hancock, the most popular vegan dish is the Harajuku Scramble — stir-fried mushrooms, cabbage, broccoli, zucchini, cauliflower, snap peas, and spinach, with a soy-ginger sauce, served with home fries and Semifreddi’s toast.

Gather, downtown Berkeley’s popular New American restaurant, has one of the easiest-to-navigate menus for non-meat eaters, with a “v” marked next to vegan options, as well as clear indications of which dishes can be made vegan upon request. This reflects Gather’s commitment to serving vegans and non-vegans alike, said owner Eric Fenster. One of the restaurant’s most popular dishes is its kale salad, whose ingredients change according to the season.

For dinner, the chickpea panisse is another vegan favorite: It features a lentil mushroom ragout, spring garlic salsa, and currants. Options for carnivores include beef tartare, roasted chicken, swordfish, a ranch burger, and more.

When it comes to thin-crust pizza, you can’t go wrong with Lanesplitter. For carnivores, there are reliable classics such as the Garbage Pie (pepperoni, sausage, mushroom, onion, olive, spinach, artichoke hearts, and fresh tomato) and the Heartstopper (bacon, gorgonzola, roasted garlic, and spinach). What makes the pizzeria’s signature vegan pies equally appetizing is Lanesplitter’s homemade notta ricotta substitute — a blend of tofu, Tofutti products, and several spices, said co-owner Vic Gumper. The company has made its own vegan cheese since it first opened its doors fifteen years ago, and takes care not to contaminate its vegan pies with meat products, according to Gumper.

In addition to its vegan pizza, the chain’s vegan calzone — which features notta ricotta, spinach, onions, and homemade red sauce — has also become more popular over the years, Gumper said.

While the aforementioned restaurants offer meat and meatless options, the fact remains that some vegans prefer not to dine around animal products at all. But that doesn’t mean their carnivorous friends need to be left wanting. Encuentro Cafe and Wine Bar is a vegetarian restaurant that specializes in delicious dishes that just happen to be meatless.

For carnivores, chef and co-owner Lacey Sher recommended the shepherd’s pie — a mix of celery root, parsnips, and lentils, topped with mashed potatoes — or the warm potato and savoy cabbage salad, which features baby kale, farro, roasted broccoli, and walnut sprinkle cheese. They offer the heartiness of a meat dish, but without the flesh.