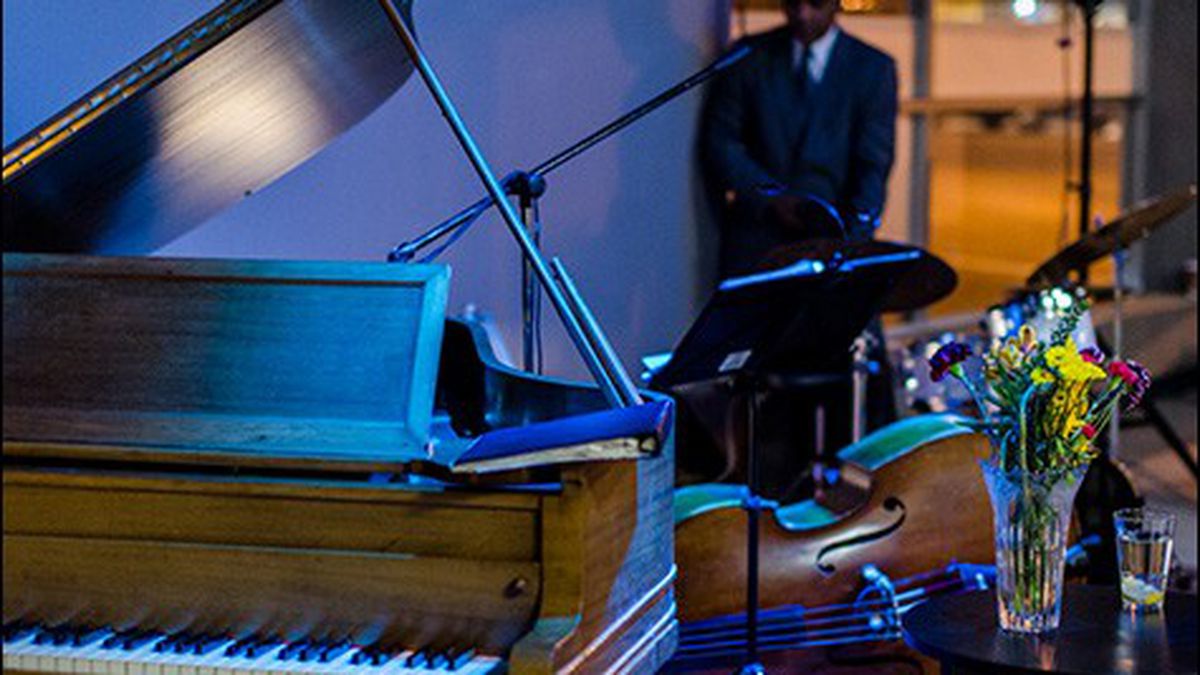 The Sound Room has carved a niche as a place to highlight vocal jazz talent.

Music scenes are a lot like ecosystems. Delicate and liable to disruption by a change of economic climate, a scene can also prove tenaciously resilient as presenters and artists find new niches capable of sustaining creative life. In Oakland’s Uptown neighborhood the rapid proliferation of nightlife has sparked a process of venue specialization that’s particularly acute when it comes to jazz. Duende tends to field left-of-center improvisers, while Piedmont Piano naturally focuses on keyboard talent. By both inclination and evolutionary opportunity, the Sound Room has become the Bay Area’s premiere showcase for jazz singers.

Situated inconspicuously at 2147 Broadway, the cozy 72-seat storefront venue opened in late 2012 and quickly started to fill a void left by Yoshi’s’ changing booking policy and the demise of East Bay mainstays like Anna’s Jazz Island in Berkeley and Kelly’s in Alameda. Created by Karen Van Leuven and Robert Bradsby, a married couple who live in Oakland, the space is still very much a work in progress that’s just starting to explore the opportunities afforded by its status as a nonprofit arts organization.

Ambitious plans are in the works, like an ongoing talent exchange with Treme Market Branch in New Orleans. But the Sound Room’s identity is already well established as a venue particularly amenable to chance-taking vocalists. As diehard jazz fans, Van Leuven and Bradsby aren’t averse to presenting instrumental artists. They’ve booked some of the region’s finest players. But with a dearth of clubs capable of or interested in providing an atmosphere conducive to experiencing a vocalist interacting with a band and audience up-close and personal, the Sound Room has cornered a market with far too little competition.

“I think the reason we are the place singers are looking at is that we’re committed to having a listening room,” said Van Leuven, a nurse practitioner who spends her days treating marginalized people in Oakland. “We set it up like a theater space so the message is you’re here to pay attention. We’ve tried to be broad in our definition in jazz. We’ve presented some flamenco, and we’ve done some events to attract a younger audience, hip-hop meets jazz.”

A decade ago, Bay Area jazz singers would play Yoshi’s or the Plush Room in San Francisco to celebrate the release of a new album. The Plush Room (and its successor, the Rrazz Room) are long gone, while only a handful of well-established artists are liable to land a night at either Yoshi’s location. The SFJAZZ Center has picked up some of the slack in both its Minor Auditorium and intimate Joe Henderson Lab, but the latter venue lacks the homey living-room vibe that makes the Sound Room such a welcoming space for singers.

The fact that it’s entirely possible to attract a standing-room-only crowd to the Sound Room makes it particularly appealing for emerging Bay Area vocalists looking to celebrate the release of a new album. Last November, San Francisco singer Lisa Engelken sold out two nights focusing on music from her second CD Little Warrior. She’s quick to sing the Sound Room’s praises, noting that “it’s a warm environment with a proper stage, so you don’t have to fight for sightlines, and every seat is the best seat in the house.” But Engelken also argues that the rise of the Sound Room represents a stark cultural shift.

“I’m a San Francisco artist going to the East Bay to find an artistic home,” Engelken said. “Robert and Karen are filling a gap, providing a home for artists around the region, and the East Bay is putting San Francisco to shame.”

Bradsby, an architect, and Van Leuven started presenting music almost by accident a decade ago when they bid on a band at a fundraiser for Oakland’s Junior Center of Art and Science. They hired the combo to play a block party, and the experience was so fun they decided to keep hiring acts for neighborhood events. A couple years later it seemed natural to book a singer for a dinner party, which is how they met Suzanna Smith (who celebrated the release of her debut album Halfway Between Heaven & Love with a sold-out Sound Room show last November). Smith’s husband-to-be, Kenny Washington, came along to help her set up, and ended up singing a few songs during the course of the evening — “and the next week we had a dinner meeting with them to gather information about how we could regularly present music at our house,” Van Leuven said.

Even before the rise of the Internet, the musician’s grapevine was a powerful network. As Van Leuven and Bradsby started presenting monthly concerts, word got out that there was a good performance space in the East Bay. The couple gained instant credibility through the association with Washington, a spectacularly talented Oakland jazz singer and soul crooner who has managed to keep a low profile even after performing Wynton Marsalis’ Pulitzer Prize-winning opus Blood On the Fields with the Jazz at Lincoln Center Orchestra at Lincoln Center last year.

They didn’t just present top Bay Area talent. Artists like cool-toned Los Angeles crooner John Proulx, brilliant New York improviser Kendra Shank, and Grammy-nominated New York singer Sachal Vasandani started getting in touch and playing their living room. By the time they decided to launch a venue, Van Leuven and Bradsby had an extensive network of contacts and a clear sense of mission.

“When we decided to move out, people were showing us these big spaces, and we looked for almost a year,” Van Leuven said. “The one thing we committed to was finding an intimate space. We realized if we’re going to call it the Sound Room, the sound has to be good.”

The room’s reputation continues to spread, drawing from a rich pool of talent in Southern California, like the savvy Los Angeles vocalist Judy Wexler, who’ll perform at the Sound Room on Saturday, February 8 with a killer band featuring pianist Murray Low, bassist Aaron Germain, and drummer Deszon Claiborne. A native Angeleno, Wexler decided to pursue a career as an actress in the early 1970s by moving to San Francisco. And after she caught the jazz bug while hanging out at North Beach’s historic Keystone Korner, she moved from the Bay Area back to Los Angeles.

In the end, her contrary ways have paid off. Over the past decade, Wexler has established herself as a gracefully swinging singer who brings rare insight to material often overlooked by her colleagues. Her latest album, What I See (full disclosure: I wrote the liner notes), features her insistently imaginative interpretations of tunes by King Pleasure, Sonny Rollins, Blossom Dearie, Richie Havens, Rickie Lee Jones, and Bob Dylan, among others. It’s the work of an artist who has found her comfort zone off the beaten path, an artist who knows the value of an attentive audience.

“For me, the main thing about the Sound Room is that people are there to listen,” Wexler said. “I wish there were more places like that in LA.”

Facebook
Twitter
Previous articleUnder-the-Radar Soup in Oakland Chinatown
Next articleMid-Week Menu: A Provencal-Style French Bistro on Lakeshore, the New Phat Beets Market Location, and a Brick-and-Mortar for No No Burger
18,632FansLike
0FollowersFollow
67,429FollowersFollow

Corrections for the Week of January 6

Our top DVD picks for the week of October 10: