.Where Kebabs Are King 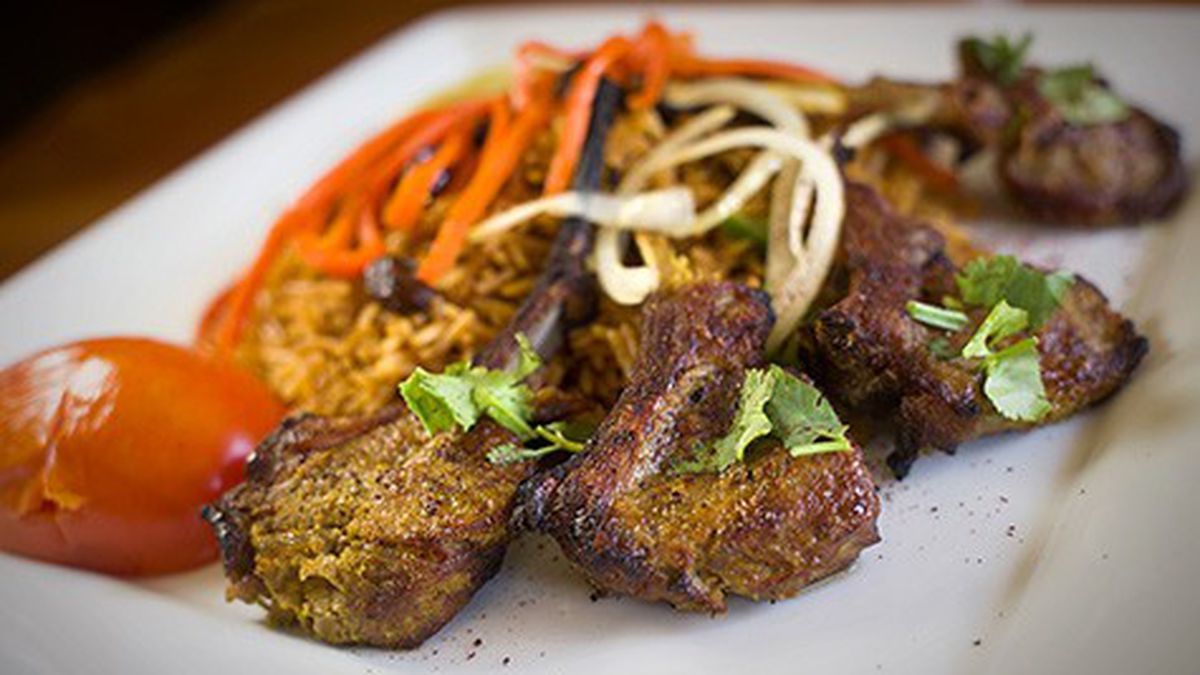 In a stretch of downtown Oakland where dining options are slim, especially during dinner hours, a small cluster of halal-friendly Middle Eastern restaurants has been a godsend for many hungry souls in search of a satisfying meal at the end of a hard day’s work.

Aria Grill & Cuisine, Kamdesh Afghan Kabab House, and Khyber Kabob Curry Falafel House (which recently replaced Q’s Falafel House), all located within a block or so of one another, each have their charms. But lately, Aria — a cozy, , tapestry-bedecked restaurant at the corner of 14th and Harrison streets, the dining area accented with a few hanging tapestries and bejeweled pillows — is the one I keep going back to.

Co-owner Ely Ahmad and his brother and fellow co-owner, Zubair Ahmad (the main chef), are both natives of Afghanistan, but Ahmad explained that the idea was to represent the cuisine of all of Aria (or Ariana) — the term that the ancient Greeks and Romans used to refer to a swath of Central Asia that included all of modern-day Afghanistan as well as parts of Iran and Pakistan.

Aria’s menu, then, is somewhat broad in scope. The restaurant serves the falafels, gyros, and hummus that diners normally associate with a Lebanese or Greek eatery, as well as a handful of Indian-inflected dishes, such as pakoras and chicken tikka masala.

But the best reason to eat at Aria is the Afghan dishes — particularly the kebabs, which are excellent. What’s particularly noteworthy isn’t the quality of the meats (which come from a halal butcher) or the seasoning (which is tasty) but something more basic: Unlike so many other kebab houses, where “medium-well and dry” seems inevitable, here the kitchen will actually cook the meat to your preference.

So the lamb kebab — actually French-cut lamb chops, cooked to a perfect medium-rare as requested — was a treat: juicy and tender the way a lamb chop ought to be, with a pleasant kick from a dusting of dried-chile powder. The generous lunchtime portion, which set me back $12.97, felt decadent and celebratory — a bit of opulence in the middle of a workday.

The chapli kebab was even better: thin, jalapeño-laced ground-beef patties that were vaguely slipper-shaped (chapli means “slipper”). According to Ahmad, these are sold as a street snack in Afghanistan, often by some guy in a back alley slapping meat onto a grill the size of a car hood at two in the morning. Aria’s version is great. I loved the lingering heat from the jalapeños and the crunch of the nicely charred edges — an element that was enhanced by the inclusion of a little bit of shredded potato in the patty, Ahmad said.

Also decent, if somewhat less exciting, was the chicken kebab — big, orange-tinted cubes of breast meat that I could have mistaken for something out of the tandoor oven at an Indian restaurant.

Every kebab plate comes with a square of puffy (and dry) Afghan bread, an under-grilled half-tomato, some sautéed onions and peppers, and — the clear highlight — a choice of white or brown rice. Veterans of Afghan cooking will know that “brown” here refers not to the whole-grain rice favored by the health-conscious, but rather to white basmati rice that’s been cooked in a concentrated broth — often one that’s made with meat drippings, but vegetarian (and, thus, a little bit less rich) in this case.

Besides the kebabs, Aria offers several other Afghan specialties of note. Quabili (or kabuli) pallow, considered by some to be Afghanistan’s national dish, is a kind of rice casserole: “brown” rice mixed with plump raisins and lightly candied carrot slivers and, in this version, topped with a braised lamb shank. When the rice is done right, as it is here, the combination of sweet and savory is incredibly addictive. The lamb shank, trimmed of all its skin and fat (and, thus, much of its flavor) was somewhat bland and not quite tender enough, though a spoonful of vinegary house-made chatni, a cilantro-based hot sauce, helped a bit. Kamdesh, down the street, makes a better version of the dish.

Where Aria excels, however, is in the various steamed dumplings that are characteristic of Afghan cuisine. (They’re listed as “pasta” on the menu.) The mantu were square-shaped ravioli, folded and sealed on top like a fancy envelope, and had a savory ground beef and sautéed onion filling. The aushak were similar, but with a filling that mostly consisted of chopped leeks — both Western leeks as well as a gandana, a varietal that’s native to Afghanistan, which had a garlicky sweetness that was similar to Chinese chives. Both types of dumplings feature thin, delicate wrappers that the restaurant makes in-house. And both were topped with yogurt and a spicy tomato-lentil-and-beef sauce, which was delicious — like a cross between a Middle Eastern bolognese and a not-quite-vegetarian chili. Actual vegetarians and vegans can request the aushak served with a sauce that doesn’t contain yogurt or beef. Again, the prices are exceedingly reasonable, at just $5.97 for an appetizer portion of either dumpling. (For better or worse, all the “.97” prices made me feel like I was digging through the discount-store bargain bin.)

We ended our final meal at Aria with the sheer yakh jahla, which turned out to be something like an Afghan ice cream sundae: several scoops of rose-water ice cream that had been mixed on a cold stone with cardamom; crushed pistachios; and a sprinkling of floral-tasting, crunchy white noodles of indeterminate origin. The dessert was rich, refreshing, and slightly unusual — definitely worth trying at least once.