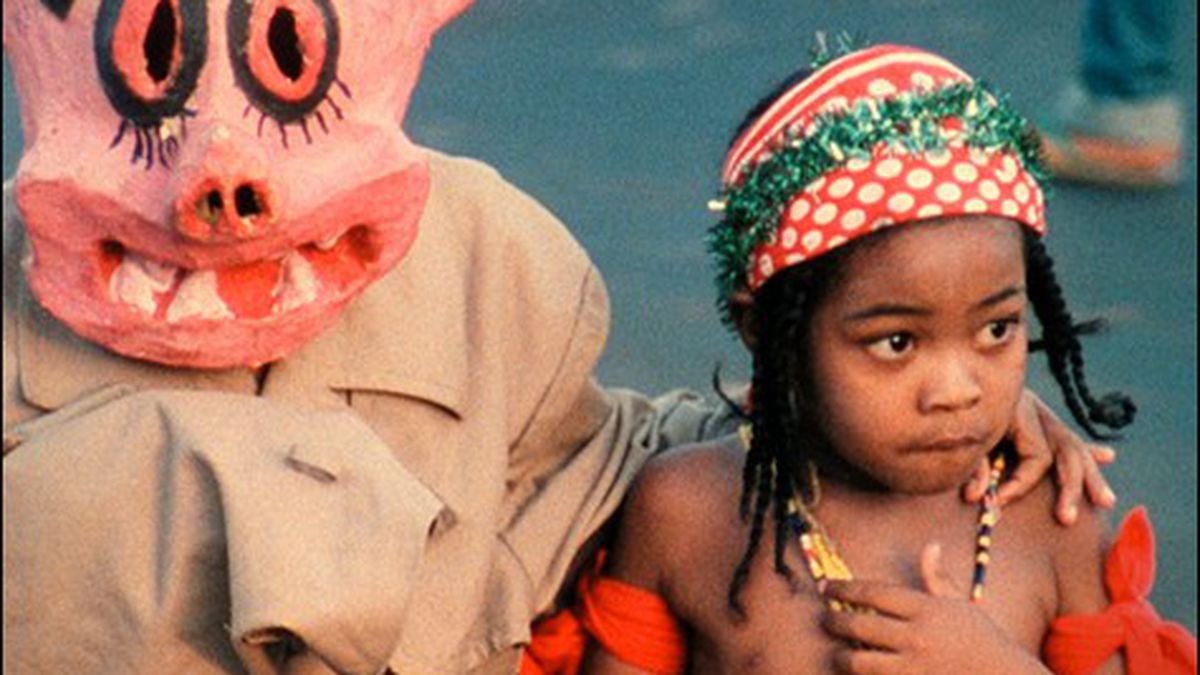 On a recent Wednesday night in West Oakland, film lovers braved torrential rain to crowd inside a hundred-year-old industrial warehouse, where a screening of a mind-scrambling video montage set to a soundtrack of operatic vocals was taking place. Altered states of awareness came easily, no drugs or alcohol required.

This unusual experience is called Black Hole Cinematheque. It’s a film series curated by an artist named Tooth, who dresses in all black and whose hands are covered with ornate tattoos. He has taken seriously the words of avant-garde filmmaker Kenneth Anger: “Some movies can be the equivalent of mantras. They cause you to lose track of time … you become disoriented … magical things can happen.”

There are no velvet seats or buckets of popcorn at Black Hole Cinematheque — think a bare-bones residential warehouse (Tooth also lives there) equipped with couches and folding chairs. Admission is always free — one of the most important tenets of Tooth’s philosophy. Screenings happen frequently, as often as once a week.

Guided by intuition and Max Ernst’s theory of collage — which he defines roughly as the coincidental encounter of unrelated realities and the spark of poetry between them — Tooth aims to create a poetic experience he calls “time-based sculpture.” His goal is to counter the stultifying effects of mainstream movies and to blur the line between art and life. Musicians often perform in a sort of live dialogue with the films. “There’s a weird thing that happens when we watch film; we think we’re watching just a recording of something that happened and we don’t completely enter and live in it,” he said. In other words, every screening is a performance.

Among the films Tooth has shown is Decoder, in which Genesis P-Orridge of Throbbing Gristle plays a disturbed high priest, and First Moon, a documentary about new moon celebrations thrown by nomads in rural China. Other screened films include Sans Soleil, the experimental meditation on memory by French filmmaker Chris Marker, and Alfred Hitchcock’s Vertigo, both shown at Black Hole Cinema as part of a long running memorial retrospective for Marker.

Recently, Tooth hosted “Adventures Close to Home,” for which he wove together home movie clips and found prints to create mysterious narratives. For example, an NYU student’s immaculately preserved silent art film from 1974 was followed by home footage of satanic hippies juxtaposed with shots of police training. In May, Tooth plans to throw a Sun Ra mini-film fest to commemorate what would have been the jazz legend’s hundredth birthday.

A large portion of Tooth’s extensive film archive consists of more than 1,100 films donated by Rick Prelinger, the co-founder of Prelinger Library and creator of the Lost Landscapes series. Tooth also finds footage in junkshops, salvage yards, and garbage cans. He said that, while the films he screens can be entertaining, he’s more interested in their educational value. He wants viewers to leave every screening with questions and “not have everything tied up,” he said.

Black Hole Cinematheque has existed as a film archive since 2009 and performance space since 2011. Tooth said he has been slowly transforming his home into a community hub for conversation and sharing of work — equal parts “open and serious but never pretentious.” Creating a public space out of his home lends a personal, intimate quality to the screenings.

His efforts appear to be paying off. Black Hole Cinematheque draws upward of fifty people to each event. Afterward, many attendees stick around to reflect on what they’ve just seen. “I love it when there are post-screening discussions,” Tooth said. “I don’t like structuring them because that’s against my nature and [it] creates a rigidity I don’t think is productive. People stay and want to talk on their own. It’s something I couldn’t have imagined but hoped for.”

The environment Tooth has cultivated at Black Hole Cinematheque has helped cement it as a local institution. Last year the San Francisco nonprofit Southern Exposure took notice and awarded it a $5,000 grant. Tooth is using the money to rent films for future programs, including for his newest concept, Interference Patterns, a series which he said will be made up of footage that “doesn’t go together according to the nature of perception.”

He’ll also use the funds to pay filmmakers who present work at Black Hole, some of whom travel from as far away as Australia to be part of this experimental haven.

Tooth is in the process of expanding his series beyond the walls of his West Oakland home. On March 20, he curated a show at Oddball Film and Video in San Francisco called “Silent Spring: Mute Visions of Eros and Madness for the Vernal Equinox,” and is planning to guest-curate an event at The Public School in Oakland. Also on the horizon is the production of a quarterly publication featuring images, poems, and essays. Tooth wants the publication to be nameless, and hopes it will “broaden the scope of what people think we’re doing by getting together and watching films in a room every week.”