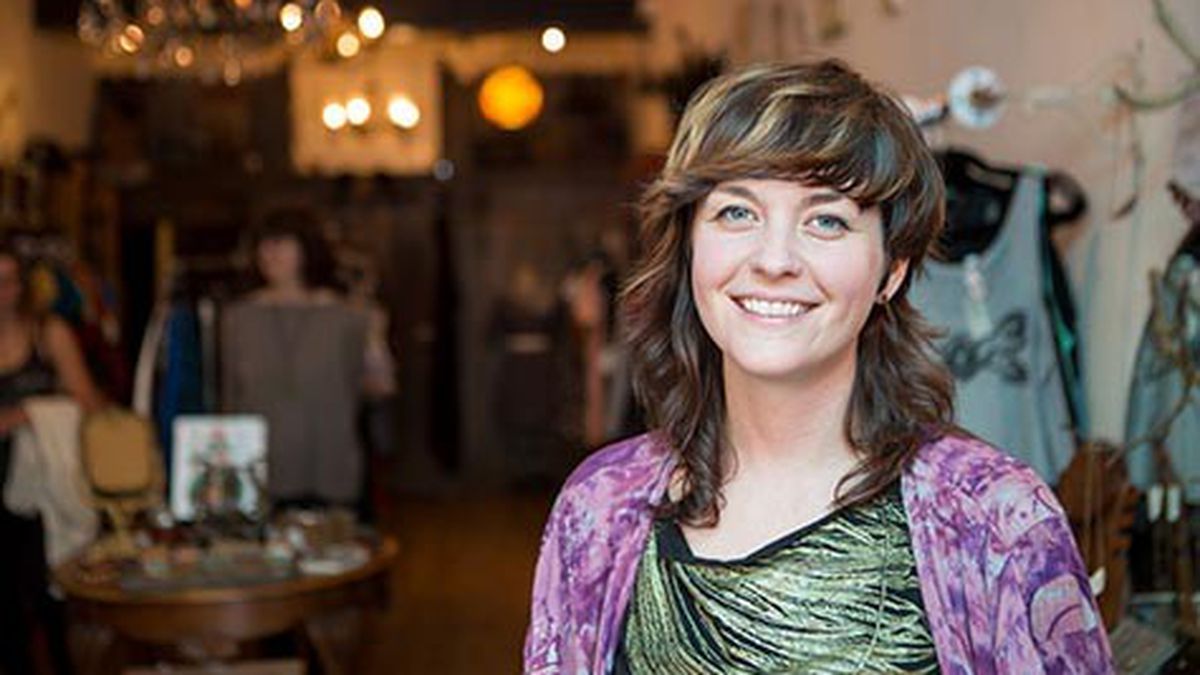 Where Fashion and Art Installations Collide

The East Bay is home to an increasing number of retail shops that double as galleries — giving local artists access to non-traditional spaces and helping them reach wider audiences.

In recent years, skyrocketing rents in San Francisco have forced many art galleries to shut down — and have also made it very difficult for working artists to stay in the city. “I felt like I blinked my eyes and everything changed. It happened so fast,” said visual artist Bunnie Reiss, who moved from San Francisco to Oakland about six years ago. “We all lived in the Mission, but everybody left. And all these galleries closed.”

Like Reiss, many artists have migrated to the East Bay, where there is now a huge demand for spaces and events for artists to showcase their work. And particularly in Oakland, there’s been a surge in venues that host art openings — but they aren’t traditional galleries.

Clothing stores, vintage shops, and other retail businesses are increasingly doubling as art galleries, putting on regular installations that transform local storefronts and give artists unconventional backdrops for their shows. And many of these businesses bring together local fashion designers and visual artists in spaces that attract shoppers and art enthusiasts alike.

“With rising rents, the art world has taken a hit here, but it’s also growing in this unique way. … Artists are really having to look at other models for displaying their work,” said Reiss, who will have a month-long show in October at Resurrect (4135 Piedmont Ave.), a boutique and gallery that opened in 2012. “Retail spaces have more of a broader audience.”

For her show Pussycats and Their Friends — opening October 11 at Resurrect — Reiss said she plans to do an animal-themed installation throughout the space, featuring works that will include stuffed figures, quilts, and fabric-based works hanging from the ceiling.

Resurrect, which sells handmade apparel and jewelry, is just one of many new mixed-use boutiques in the East Bay:

Tilde, Oakland Surf Club, Field Day and Friends, Crown Nine, Rare Bird, Oak Common, Show and Tell, Blue Door Beads, and SoleSpace are all examples of independent retailers that incorporate art into their missions and business models. Some of these clothing and vintage shops feature a rotating selection of artwork inside the store, while others include a separate gallery section — or convert the main retail space for art openings and other community events.

Retail sales generally pay the bills, allowing the stores to host artists and art events without some of the typical financial challenges that traditional galleries face.

“There’s so much pressure on galleries,” said Trinity Cross, owner of Field Day and Friends, a boutique that opened June 2013 in uptown Oakland (329 19th St.). “If they just have art on the walls … they have to sell it. And if collectors aren’t interested in their stuff, that’s really hard for artists.”

At Field Day — where Cross sells her own sustainable fashion line, which includes dresses made from recycled sheets — she said she doesn’t select artists based on the marketability of their work. “It’s taking a chance on someone who isn’t established,” she said. “That inspires people to create more and get themselves out there.”

In this way, these boutiques complement the Oakland Art Murmur galleries, which are for the most part exclusively dedicated to art, and host openings during the massive First Fridays street festival in uptown and downtown. Some of those gallery owners have lamented the fact that these monthly street events bring large crowds to Oakland, but generally don’t help boost art sales.

For artists, one of the draws of doing a show at a boutique is the fact that retail shoppers see their work — and may be more inclined to make an art purchase than a First Friday attendee wandering into a gallery. “Someone coming to buy a dress may fall in love with the art,” said Cross, who said she has featured more than thirty artists since opening last year and is booked through mid-2015. Field Day features new fashion designers and artists each month, with kickoff events each first Friday.

Art events also help small boutiques stand out in Oakland, where numerous business districts have attracted clusters of indie retailers and vintage shops. “I feel like we’ve been successful, because we have these parties and we open our doors to everybody,” said Ari Serrano-Embree, who co-owns Oakland Surf Club with her husband, Max Klineman. “This is not just a shop that closes at seven.”

The downtown shop (337 14th St.) features a range of surf-style clothing brands in its downstairs storefront and operates an upstairs gallery space, where the owners host shows and events throughout the year. “All these people that love these artists might not have come to the shop otherwise,” said Serrano-Embree, noting that the store’s art openings and other events have played a huge role in promoting the Surf Club brand.

Resurrect owner Kate Morrow said from the start that she wanted to find a way to integrate a gallery component into her shop. “It was always in my business plan. It really keeps the store atmosphere changing.”

And for local designers selling handmade apparel, the mixed-use boutique gives them an opportunity to collaborate with artists.

“I wanted to have fashion in more of a creative context,” said Lisa Aurora Calderón, owner of Tilde, a new Oakland shop (349 15th St.) that had a soft opening in July and is planning a launch event on August 31. “The whole environment is curated.”

Tilde is a clothing shop that primarily features 1980s and 1990s vintage styles in partnership with WRN FRSH, an Oakland-based brand, as well as Aurora’s own handmade dresses and jewelry. The shop also has vintage arcade games and an upstairs library and reading room run by Libros Libres, a group that does local book events, and gives away free books at Tilde.

In addition, Tilde will feature rotating artists and host regular art-related events, said Calderón, who also is a co-founder of Naming Gallery, an art space next door. She said she wanted to open a retail space that was accessible to a wide range of people. “People can come in and put a quarter in an arcade machine … or go upstairs and get a free book.”

At the Oakland jewelry boutique and art gallery Crown Nine (515 9th St.), owner Kate Ellen said she, too, wanted to open a store that felt more like a community space than a purely commercial one. “Part of what the art does, that the other stuff in the store doesn’t, is it creates opportunities for events and for people to come together,” said Ellen, a jewelry designer who hosts quarterly art shows at the shop. “And Oakland is a city of artists.”

And partnering with artists makes her day-to-day business more enjoyable: “It’s a personal preference. I just want art around me.”