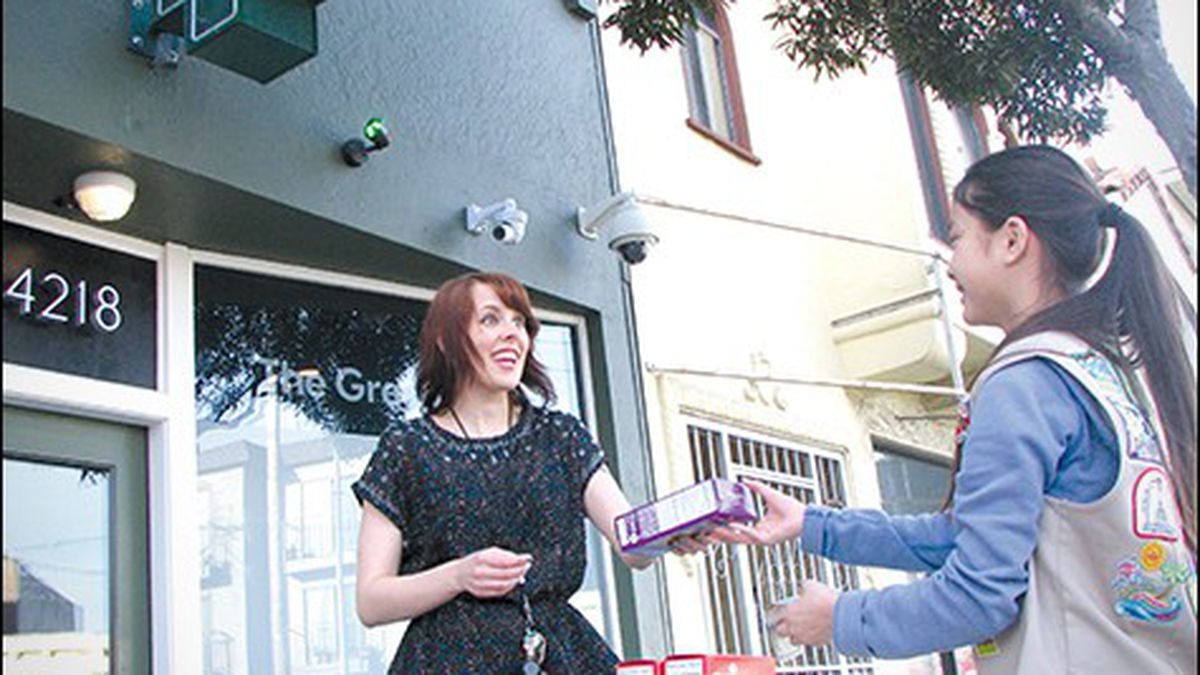 A Bay Area mom's decision to allow her daughter to sell cookies in front of medical pot dispensaries made international headlines.

A progressive Bay Area mom who boosted her daughter’s sales of Girl Scout Cookies by targeting medical pot clubs made international news this month, after the Express first published a report about it on its blog on February 19 and the story was picked up by everyone from Mashable and NPR to KTLA and the Huffington Post.

The idea, by San Francisco mom Carol Lei, was genius: Set up a table in front of a cannabis storefront to sell boxes of cookies to marijuana users. (Cannabis is, of course, a powerful appetite stimulant that works directly on nerves in the stomach as well as the brain.)

“They learn that they’re not drugged out,” Lei said of cannabis users. “Many have serious needs, and are just a little different.”

“And they get very hungry after!” said thirteen-year-old Girl Scout Danielle, who did brisk business in front of The Green Cross dispensary on Mission Street.

“Do you want to buy some cookies?” Danielle chirped at passersby.

Some folks hustled past with their hands tucked into their pockets as the sun went down and the wind picked up. But most smiled and stopped. Young dudes rocking fresh Nikes and aging hippies in faded denim smiled and happily handed over fivers. The Green Cross’ staff came out repeatedly to snap up boxes.

Though she is supervised by her mom, Danielle must conduct the sales herself, and she has until March 16 to hit her target of 1,200 boxes. Danielle has sold cookies in front of three dispensaries in the past, first at the Vapor Room in the Haight before the feds closed it, and then SPARC in 2013.

“I feel like it’s safe,” said Carol Lei, who has lived near Glen Park since 1987. “There’s always a security guard and cameras everywhere.”

Selling cookies around town exposes the girls to other walks of life, Lei said. It’s made Danielle less shy.

Danielle said she’s done her best business among the throngs of tourists on Montgomery Street. She’s also met homeless people who don’t have a dollar. She’s raised money for camp, troop supplies, and Alzheimer’s Disease research. And does she mind the aroma of weed wafting out the door?

“Um, I can’t smell anything because my nose is stuffed up.”

Danielle sold out of cookies in just 45 minutes last Monday, and the Green Cross marketing team quickly put a post on the web community Reddit, where it was an instant hit. Our blog post ran midday Wednesday, and by Thursday, bloggers in New York at places like Mashable.com were picking up the item, and from there it spread to much of the mainstream media.

ABC News and several other national outlets called us trying to get Lei’s contact information. But Lei quickly stopped doing interviews as the media hype built. By Friday, outlets including NPR were airing the item, and adding to it. A reader’s poll on one news outlet found that 90 percent of respondents supported Lei’s decision to have her daughters sell cookies in front of a pot shop.

The story clearly hit a nerve in America — and with journalists. The annual Girl Scout Cookies sale forces reporters to find a new hook each year, and legal pot is among the top stories of 2014.

Marijuana continues to come out of the closet into mainstream culture, and the norms about pot, parenting, and what’s truly safe for kids are up for debate like never before.

The fat lady has sung. The Drug Policy Alliance (DPA) decided last week that there’s not enough time or voter support to run a pot legalization initiative in California this year. The group, as a result, has punted the ballot measure effort until 2016. The deadline to garner the estimated 800,000 signatures necessary to make the November 2014 ballot is April 18.

About $10 million is needed to run a legal weed campaign in the massive Golden State, and the DPA has access to that kind of funding, but will not be plunking it down in 2014. The death of Progressive insurance founder and reform advocate and funder Peter Lewis played a role in DPA’s decision.

In response, Oakland marijuana cultivation educator Ed Rosenthal said he would drop plans to push a competing initiative. The two other competing legalization groups lack the money needed to make it to the ballot in 2014.