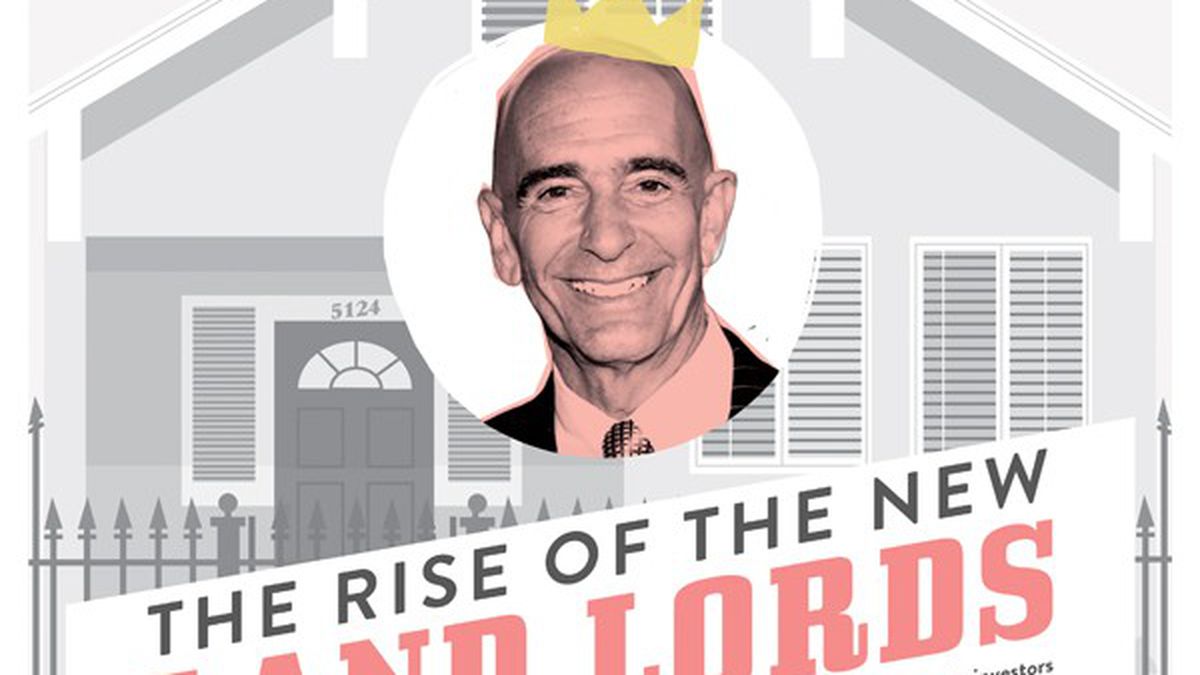 Letters for the Week of February 26

Readers sound off on the East Bay housing market, farming in San Joaquin Valley, and fracking.

The real problem with people like Thomas Barrack Jr. and those of his kind is that they look human like us but really aren’t. It’s an old story: The rich get so rich that the poor get pissed off and kill them, and then it starts again. Century after century, the same game is played. It’s why Moses left Egypt, why Jesus was murdered, and why our government is so paranoid it wants to listen to every word we utter because we might be plotting something against it.

To tycoons like Carl Icahn, and the Koch brothers, we are ants in their way. We have no feelings, no families, no homes, no dreams. We are pawns to be manipulated for their profit, the profit they have sold their souls and humanity for. Welcome to the age of feudalism/capitalism.

Once again, the Express reports what other news outlets can’t or won’t. “The Rise of the New Land Lords” exposes exactly who is exploiting the East Bay housing market. The wealthy are turning America into a national housing plantation. Twenty-four-hour news radio KCBS won’t report fully on this, but they’ll air ads for “house flipping” aka “house pimping.” And your report identifies in much more detail who is responsible for all of the economic and social destruction and the weaponizing of what once was considered a basic necessity.

My son can walk, talk, and use his hands because of the great care provided by California Children’s Services (CCS). He received great care and follow-through both from CCS and the Center for the Vulnerable Child at Children’s Hospital Oakland.

Brilliant cover story. Mr. Palomino does a splendid job chronicling the history and evolution of this crazy desert farming cash cow we’ve stuck ourselves with in the western San Joaquin Valley. Seems to me that we need to start thinking about not just whether our foods are “local” or “organic,” but whether the growing practices make sense on a basic level, and then vote with our dollars in the same way Michael Pollan asked us all to vote with our dollars about industrial food so many years ago. If we let the growers know that we’re not going to support this kind of environmentally unsound agriculture, then the demand for piped-in water should decline rapidly. I know that I’m going to start thinking twice about springing for almond milk or almond butter, and I’ll research where my water-intensive crops are being grown from here on out. I’d urge everyone to do the same.

Walking in a Farmer’s Boots

Imagine riding in a bicycle race through the streets of San Francisco, and after completing half the course, you are told that the rules have changed and every third rider must abandon pedaling and instead carry his bicycle the rest of the way. You would not be very pleased if you were that third rider.

Well, that is what happened to farmers like me along the west side of the San Joaquin Valley after we planted almond trees years ago but were later told that part of that water needed by the trees was going to be taken away. Combine years of surviving under these new rules with a devastating drought that is now gripping our state and the result is farmers must make difficult decisions this year whether to keep their trees alive.

It is unfortunate that your readers were not provided with this important information that was passed along to the author of “California’s Thirsty Almonds” during his visit to my farm.

Farming has never been an easy endeavor for those who commit their lives to working the soil. Adding frustration to our efforts to provide a safe and affordable food supply is the lack of understanding people exhibit in criticizing our efforts. They are entitled to their opinions but those opinions should not be treated as facts. It was disappointing to read some of these opinions go unchallenged in the article.

The San Joaquin Valley is recognized as the most productive region for food and fiber crops across the globe. This production is the result of a region with a good climate and growing conditions. Yet some people continually label our lands as toxic and loaded with damaging minerals in the soil. But these criticisms do not correlate with the successful story of the food grown on our farms that feed families across California and elsewhere.

Our valley is one of five Mediterranean-like growing regions in the world and the only one of its kind in the United States. If critics of how we use water on the farm were successful in doing away with farming in the San Joaquin Valley, that means the food we produce would be grown in one of those other four regions outside of the United States. I doubt if the American consumer would embrace that idea.

Some of the crops that we grow, such as tomatoes, flourish in the San Joaquin Valley. The soil and dry climate is ideal for tomatoes and other crops. The water we bring from other areas of the state is vital to this production. If tomatoes were planted in a region that has an exceeding abundance of rainfall, they would never mature and instead would rot on the vine as a result of too much water.

Farmers apply water to their fields according to the most efficient technology available. As a result, over the years the amount of applied water has declined while crop production has nearly doubled. It is the consumers who benefit from these improved practices. Without the financial return from such high value crops as almonds, farmers would not have the resources to invest in their land and continue to provide for the consumer.

Today, farmers like me in the Westlands Water District are prohibited from allowing any drain water to escape our farms. Because many of us have installed drip irrigation systems on our farms, there is little drainage water to capture. The improved efficiency of our irrigation systems results in increased harvests and improved safeguards to the environment.

Another criticism levied at Westside farmers in the article was the alleged subsidies farmers receive with their water. When the federal government decided to construct the Central Valley Project, efforts were undertaken to secure signees who would agree to purchase the water and repay the construction costs. These signees became the local water districts who deliver water to farmers who grow our food. These contracts require full repayment of the construction costs according to the amount of water delivered. Other costs that are fully paid by the contractors are for operation and maintenance of the project. Congress made the decision that the only cost that would not be repaid would be the accrued interest, which, as it turns out, was a wise decision by our lawmakers when one considers the dollar volume generated from the farms in the form of taxes.

Westside farmers and others throughout California have supported a seven-year-long effort to restore the Sacramento-San Joaquin River Delta’s ecosystem and at the same time provide a reliable water supply to nearly 4,000 farms and two-thirds of our state’s citizens. Scientists, biologists, and engineers have worked on this project that is called the Bay Delta Conservation Plan. No one disagrees that the delta is in need of help, and this plan is the best opportunity to provide that help. Critics of the plan are narrow-minded and fail to see the positive results that will stretch throughout our state. They are grasping at straws and making false accusations to detract from the plan.

One of the benefits from the plan is the increased protection it provides to juvenile salmon, Delta smelt, and other fish by restoring wetlands habitat and reducing the amount of water pulled from the delta by the pumps. These pumps at the south end of the delta have been targeted for years as the reason that fish populations have declined — not so! Take a close look at the stressors that affect delta fish and you’ll find that predators and other fish have a voracious appetite for young salmon and smelt. Poor water quality in the delta is another major cause of the fishery decline. I wonder how many people know that the Sacramento Regional County Sanitation District dumps tons of ammonia each day into the water that flows into the delta. When one steps back and looks at the facts, then a true understanding emerges of how little the pumps impact the delta fishery.

If California is going to prosper as it moves forward, it will need all of us working together. Farming has been an important part of our history and it will continue in that role as water is made available to grow the food that we all rely upon.

Hats Off to Alameda County

And the GOP said, “It’s too hard Mommy. It won’t work.” Hats off to Alameda County who showed it can be done, and did it. Congratulations to everyone who contributed to this outstanding effort.

Cops Don’t Live in the Community

Gross incompetence and cluelessness has nothing to do with liberal or conservative. Also, most OPD cops don’t even live in the community. That isn’t a pre-requisite, but it’s notable.

Also notable is that Chief [Anthony] Batts was pretty much driven away by the mayor — how on Earth she’s standing for re-election, I have no idea.

I grew up in New England, and as a child I was lucky enough to visit California. The state’s pristine beaches and wide blue sky captivated my imagination. I knew then that California was the land where I’d make my future.

As a UC Berkeley student and member of the statewide Students Against Fracking coalition, I am deeply concerned about fracking and its effects on the places that make the Golden State so meaningful.

Hydraulic fracturing, or “fracking,” is a dirty and dangerous method of oil and gas extraction that involves injecting millions of gallons of highly pressurized water, sand, and toxic chemicals — including known carcinogens — deep into the earth. Fracking has disastrous effects on our air, our water, our health, and our climate.

I call on Governor Jerry Brown to put our state’s future — its students and young people — ahead of the destructive agenda of the oil and gas industry, and ban fracking in California.

Our February 19 music story “Active Music Festival Keeps It Local” got wrong the name of the Active Music Series. &#8;