.What’s in Your Lunch Box? 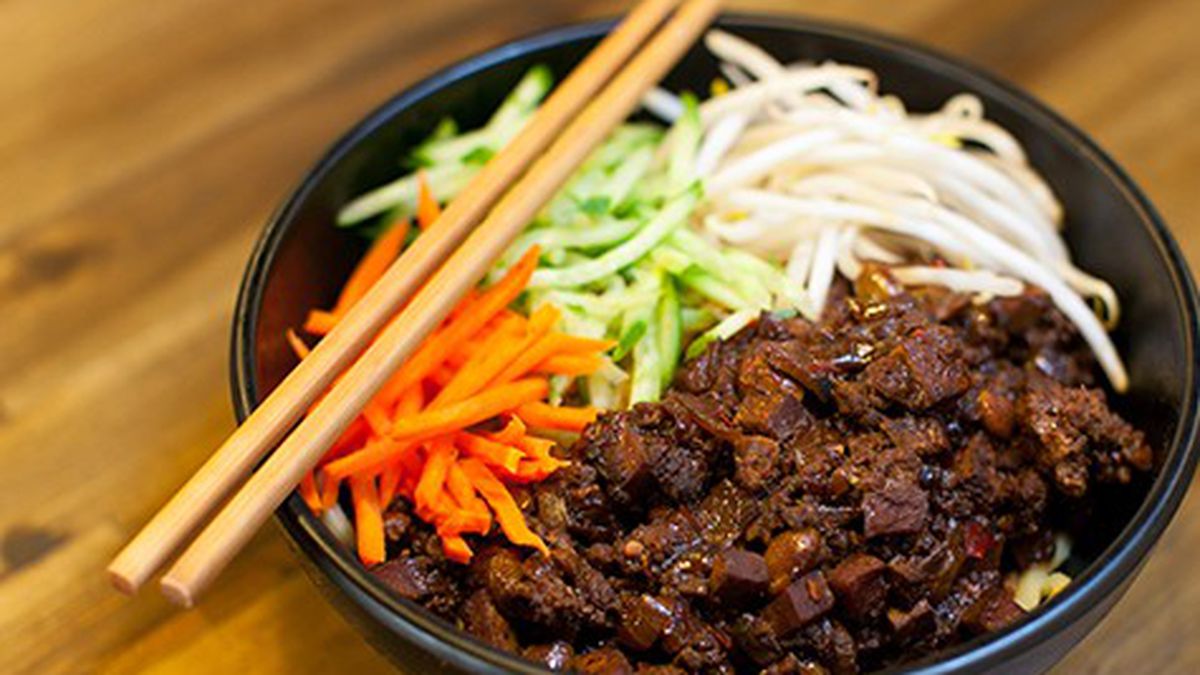 Whenever I get homesick for Taiwanese food, I think of the year I spent in Taipei during my late twenties, when I took for granted the mind-bogglingly sweet tropical fruits, the pungent pleasures of stinky tofu purchased at a street stand of questionable sanitary repute, and the ubiquitous bian dang (Taiwanese lunch box) shops where $2 or $3 bought a feast.

With their new restaurant, Taiwan Bento, lead cook Stacy Tang and her husband Willy Wang have brought a bit of bian dang culture to the heart of Uptown Oakland, where there aren’t many places you can grab a quick, filling lunch for under $10. Taiwan Bento aims to fill that niche. For now, the streamlined menu consists mostly of a limited selection of bian dang, or “bento” (to use the more familiar Japanese term), ladled into multi-compartment plastic trays, or compostable takeout containers if you’re taking your food to go. Either way, lunch is served in less than five minutes flat.

Probably my favorite was the braised pork rice bento, or lu rou fan, which, as with so many peasant dishes, purportedly has its roots in poverty. During a time when most people couldn’t afford to buy much meat, thrifty Taiwanese home cooks would dice pork belly into small pieces and slowly braise it in soy sauce, five-spice powder, and various aromatics until it formed a rich, gelatinous, deeply savory meat sauce. Even a little bit of this sauce, served over a heaping bowl of white rice, could keep a working person going for the better part of the day. (My Taiwan-born uncle said when times were really tough, they’d ladle rendered pork fat — no meat at all — over rice.) Tang cuts her lu rou fan with ground pork, but it was the luxurious bits of skin and fat from the belly that won me over.

Each bento box comes with a heaping mound of rice, a tea egg, edamame, and Taiwanese-style “kimchi” (assorted pickled vegetables) — each element in its own compartment. You’ll recognize the tea egg, a staple at Taiwanese convenience stores, by its telltale marbled pattern — created by cracking the shell of a boiled egg before steeping it in a heady brew of soy sauce, tea leaves, and star anise. The taste is mild, comforting, and less salty than you would expect. I liked the soft-boiled egg (available for a $0.50 upcharge) even better. These were more Japanese than Taiwanese — the kind of egg you’d find in a bowl of ramen: slightly sweet, with a bright-orange, perfectly creamy, spoonable yolk.

You shouldn’t come to Taiwan Bento expecting restaurant-style cooking. Tang cooks the way a mother would at home, so dishes lack the bold flavors you might find in traditional ma po tofu (the vegetarian bento option), for example. Taiwan Bento’s homey, Taiwan-ified version has no numbing Sichuan peppercorn and just a tiny prickle of heat. Still, the soft tofu cubes soaked up the sauce beautifully, and the shelled edamame added a surprising element of freshness. (Tang has since removed the “ma po” from the name to avoid confusion.) And the roasted chicken bento — with its tender thigh meat and addictive sesame-oil-based marinade — was precisely the kind of lunch I’d want to bring on a long train ride through the countryside.

The menu item that I had the highest hopes for wasn’t a bento at all, but rather the beef noodle soup — a dish that is as beloved in Taiwan as ramen is in Japan, and has nearly as many distinct styles. There are tongue-numbingly spicy versions; bright-red tomato-based versions; Chinese-Islamic versions with a clear, clean-tasting broth; and, famously, one luxe $300 version that features custom beef cuts and five or six different soup stocks blended together.

What Taiwan Bento serves is a middle-of-the-road beef noodle soup like you’d find at any half-decent noodle shop in Taipei — a dark, thin broth that tasted mostly of soy sauce and la doubanjiang (spicy bean paste). The vegetables (carrots and tangy preserved mustard greens) were standard; the fresh wheat noodles were pleasantly chewy — a texture folks in Taiwan call “QQ.” It was a hearty, tasty bowl of noodles, if not a transcendent one. I would have liked the braised beef shank to be more tender, and there wasn’t an option to add soft-cooked tendon, which some purists would argue is the soul of the dish. (Dragon Gate, over in Jack London, serves an excellent version with the tendon cooked almost to melting.)

Part of the challenge is that Tang is still figuring out who her customers are. She told me that Westerners complain that the lu rou fan is too greasy; Taiwanese diners say it isn’t greasy enough. Does it matter if she uses tendon in the beef noodle soup if most customers have no frame of reference? Still, good Taiwanese food is such a rarity in these parts, if a place serves enough of the “real” stuff, people who crave that will seek it out.

You’ll want to wash your lunch down with a cold Taiwanese beverage. On a hot day, the house-made winter melon drink is a caramel-y, subtly floral delight, and the boba milk tea is better than what you’ll find at your average bubble tea chain. This is no boba cafe, but the vibe is low-key and atmospheric, especially in the quiet upstairs alcove, which, like the rest of the space, features understated dark wood furniture and free Wi-Fi.

With photos of Taiwan scenery lining every wall, even someone who’s never been to Taiwan might start to feel a little twinge of nostalgia. Certainly I did when presented with a steaming bowl of zhajiangmian: noodles tossed in a hearty ground-pork sauce with whole soy beans and cubes of flavor-soaking dried tofu, plus raw bean sprouts and shredded carrots on top for freshness and crunch. Call it Taiwanese bolognese if you must. For me, it was simply a dish my mom made when I was a kid — a huge potful, divvied up into single-serving Tupperware, whenever she had to go out of town for a few days. That way, she could rest easy that I wouldn’t go hungry.