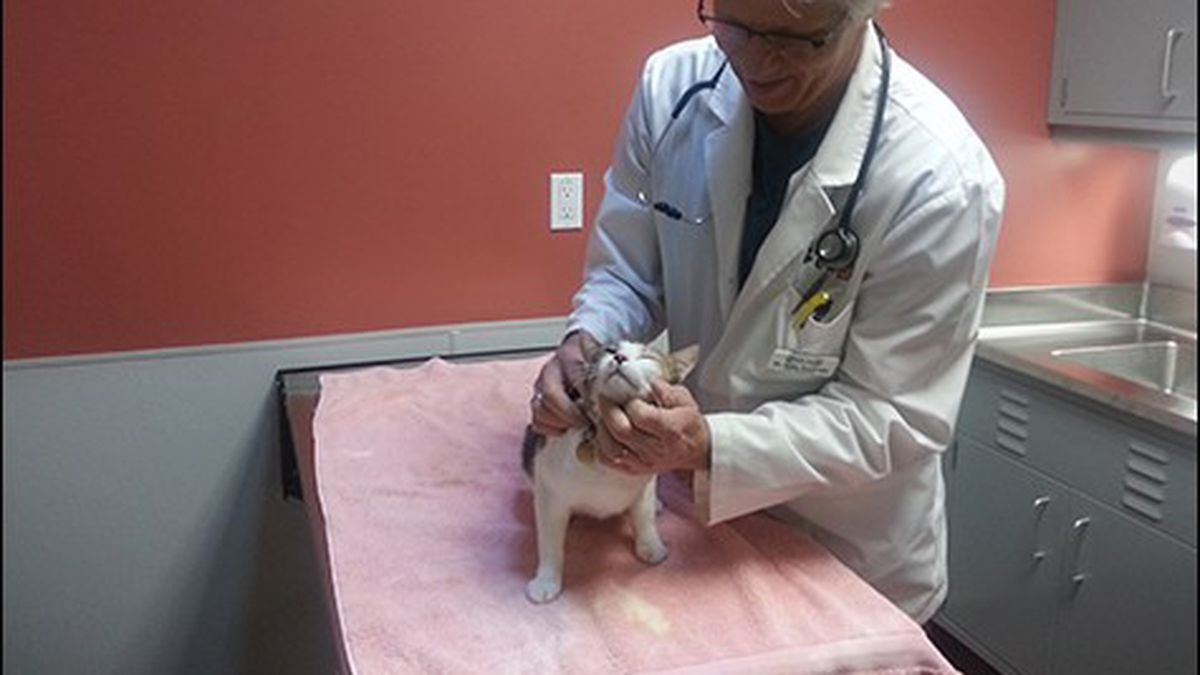 An online petition has sparked concerns about the quality of care at the city-run shelter.

In early December, Allison Lindquist, president and CEO of the East Bay Society for the Prevention of Cruelty to Animals (SPCA), started to notice posts on social networking sites about an escalating “crisis” brewing at Oakland Animal Services (OAS). An online petition stated that animals were being adopted without being spayed or neutered, and that the city-run shelter had no veterinarian on-site. To Lindquist, it sounded like a “sky is falling” scenario.

Soon after, Lindquist received a call from Oakland City Councilmember Libby Schaaf asking if the SPCA could help. It turned out that OAS’ on-site veterinarian had recently resigned, leaving no one on staff at the East Oakland shelter to spay and neuter animals. Instead, according to OAS interim director David Cronin, shelter officials were allowing people to go through a “foster-to-adopt” process, meaning they could foster an animal before it was spayed or neutered but would have to spay or neuter the animal elsewhere at their own expense in order to officially adopt it.

“I wished I had heard about it before it had escalated to that point,” said Lindquist, who promptly contacted Cronin and offered the services of the East Bay SPCA to help with spaying and neutering. “It was not an ideal situation,” she said. “However, I would not consider it a crisis.”

Nonetheless, the brouhaha has shed light on larger problems at the shelter — mainly that it has been chronically understaffed. Currently, there is the equivalent of about six full-time vacancies at OAS, including two critical animal control positions that have been unfilled for more than a year, a volunteer program coordinator position that has been vacant for a year and a half, and a full-time police records specialist position, in addition to an on-site veterinarian. OAS, which is under the domain of the Oakland Police Department, is budgeted for about thirty full-time employees.

The concern from volunteers, animal welfare advocates, and city officials about the impact of this understaffing has swelled over the last month as the city finished its selection process for a new permanent OAS director. Gary Hendel, the former director of Animal Care Services in San Antonio, will step up as OAS director starting January 6, the city announced in a memo last week. (Cronin, a former OPD sergeant, has been temporarily running the shelter since April 2013, after the previous director resigned.)

“I’m really sorry that our volunteers and animals have had to experience the lack of care that we owe the city,” said Schaaf, who adopted a cat from OAS in September — a process that she said gave her a firsthand perspective on the impact of understaffing at the shelter. Most notably, due to a backlog, she had to wait several weeks to bring the cat home after finalizing the adoption, Schaaf said. “That was very frustrating. … She had a nice, loving home waiting for her.”

Since the recent departure of OAS’ veterinarian, OPD has relied on a part-time off-site veterinarian and a volunteer vet, and otherwise “encourages the use of private Veterinarians for animal owners,” Sean Whent, OPD’s interim police chief, wrote in a December 9 memo to the city council. Although OAS has a budget for two veterinarian technician positions, it currently has one on staff and one “provisional employee,” both of whom are not registered veterinarian technicians, said Cronin. That means they are not licensed to perform procedures like casting broken bones and administering anesthesia. Some of the ongoing vacancies stem from hiring freezes by the city, he continued. On top of the vacancies, the city has, since late November, stopped taking new volunteers as it reviews its application process. And according to OAS volunteers and officials, the lack of a volunteer program coordinator has hindered the ability of volunteers to play the critical role in the day-to-day operations of the shelter that they have in the past.

The end result is that animals are not getting the kind of attention they need to remain healthy, say several volunteers who requested anonymity because they were told that speaking to the media violates OAS policy. For example, they said, some dogs are never taken out of their kennels because there is no one to take them outside for even a short break.

“I’m incredibly upset and frustrated,” said one volunteer. “To me, this is like an emergency situation here. We are not at basic, adequate levels of staffing and care for these animals. Why is no one paying attention? This house is on fire.”

The lack of support for OAS volunteers is troubling, said Susan Furukawa, a board member of Friends of Oakland Animal Services, the nonprofit entity made up of OAS volunteers. In 2012, about 200 volunteers contributed roughly 20,000 hours total. “I’m very worried about [the animals’] well-being in terms of physical health, because there’s no vet staff, but also in terms of mental health,” she said. “One of the key things that volunteers do is to help keep the animals mentally and emotionally stable, getting them out to play, taking dogs on walks. All of that is really important to the shelter.” Volunteers worry that the agency’s lack of resources could translate to a higher risk of disease, fewer adoptions, and an increase in euthanized animals.

Cronin said the concerns are overblown and that the performance of OAS has improved. He also emphasized that the city is on track to be fully staffed within ninety days. “Most of the staff feels like we’re in better shape than we have been in years,” he said. “Our shelter is moving in the right direction. … I’m proud of the numbers we’ve accomplished.” In general, he said, more animals are being adopted and going to rescue organizations, and euthanasia rates are at their lowest point in the history of the shelter.

In 2012, OAS euthanized 1,710 dogs compared to 1,396 in 2013, he said. (The shelter took in roughly 200 fewer dogs this year). The euthanasia rates for cats have remained fairly constant, he said. OAS typically takes in more than 6,000 animals each year and houses 300 to 400 animals on a given day. Euthanasia rates have gone down, Cronin said, because OAS has expanded its rescue network and made it easier for organizations to take animals from the shelter. He added that the shelter’s budget of around $1.6 million has remained fairly consistent in recent years, but that OAS depends heavily on outside donations.

And while spaying and neutering is no longer happening on-site, Cronin said it is better for pet owners to form relationships with veterinarians and not depend on the shelter for care. “We’re forcing people to be responsible,” he said, adding that the facility has continued to focus on “rescue, rehabilitation, and education,” in line with the efforts of the former director. “We didn’t have a crisis. We didn’t have an emergency,” Cronin continued. “The director position is to manage the shelter, manage personnel, and manage the budget. … That’s what we are doing now, and we are doing it within budget, and with a high level of care.”

He explained that OAS has stopped taking on new volunteers because the city is reviewing the application process to make sure it is not discriminatory toward people with disabilities. However, he acknowledged that the lack of an on-staff volunteer coordinator has been difficult. “That position is really, really critical and the volunteers are really leaderless without a coordinator,” he said. “It keeps them together as a team, keeps them moving in the same direction.”

It remains to be seen what role the new OAS director, Hendel, may play in the ongoing process to fill the remaining vacant positions. According to Whent’s announcement of his appointment last week, Hendel has more than nineteen years of experience in animal care services in Texas, Oregon, Ohio, and Hawaii. He declined to comment.

This month, the city will take on the issue of possibly restructuring OAS. Cronin said that OPD will present a comprehensive report to the city council on the state of the shelter as well as the advantages and disadvantages of a number of possible reforms. One proposal is to move OAS to another city department like public works. Other scenarios include letting a nonprofit take over OAS, having the director report to someone other than the chief of police, and splitting the rescue and enforcement portions into different agencies, he said. The structure of OAS could also stay the same.

Lindquist said that municipal shelters tend to struggle when their funding is part of police budgets. “It really becomes an unfair competition,” she said. Schaaf agreed: “Moving the shelter to a department where they can get more attention and more resources is a key step to sustaining better operations.”

Regardless, agencies across the East Bay are hoping for improvements in Oakland. “All of us want for OAS to be fully staffed and have the resources that it needs,” said Corinne Lamata, executive director of the Berkeley Humane Society. “If they are experiencing stress or a lack of resources, what it means is that more animals will suffer.”

Sam Levin
Previous articleBreathalyzer for Pot Hits Los Angeles
Next articleThursday Must Reads: Oakland Airport Connector to Open This Year; Soda Tax Would Save Up to $1 Billion in Healthcare Costs
18,645FansLike
0FollowersFollow
66,473FollowersFollow