1. In a ruling that is expected to expand the influence that wealthy donors have on politics in the United States, the US Supreme Court today struck down some limits on how much money private individuals can give to politicians’ campaigns, The New York Times$ reports. In another 5-4 decision, the court’s conservative majority ruled that the aggregate cap placed on individual donors of $48,600 over two years is an unconstitutional infringement on free speech. The court said the same thing about the aggregate cap of $74,600 on individual donations to political parties. The decision means that wealthy donors can now contribute to as many candidates as they want, although they will still be limited to giving no more than $2,600 to any single candidate for federal office. Liberal Justice Stephen G. Breyer called the decision a blow to American democracy, saying “today’s decision may well open a floodgate” for money in politics. 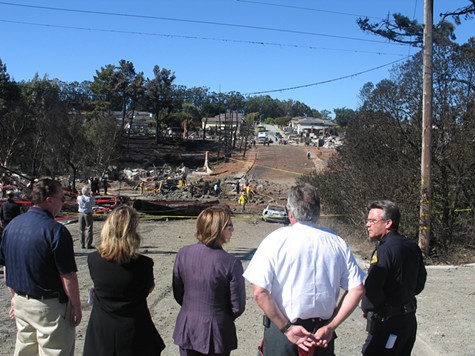 2. A federal grand jury in San Francisco indicted PG&E on twelve felony criminal charges, stemming from a deadly 2010 pipeline explosion that killed eight people in San Bruno and leveled a neighborhood, the Chron reports. The criminal indictment states that the utility repeatedly violated the federal Pipeline Safety Act. However, no PG&E officials were named in the indictment. PG&E contends that the federal charges are unwarranted.

3. Oakland City Administrator Fred Blackwell told the Oakland Tribune$ that a proposal to build a new stadium for the Oakland Raiders on Coliseum property has a $500 million to $600 million shortfall. Blackwell said that the new stadium would need to be subsidized by the major development to be built around it — known as Coliseum City.

4. In the wake of three major public corruption scandals, state Democratic leaders canceled a lucrative fundraiser at a golf resort in San Diego, the Chron reports. However, state Senate leader Darrell Steinberg said the Democratic Party will still keep contributions raised so far for the fundraiser — which costs $65,000 to attend for a party of four.

5. The Obama administration’s top intelligence official admitted that the NSA has been spying on specific communications made by Americans, including individual phone calls, the National Journal reports (via Rough & Tumble). The admission by James Clapper, director of National Intelligence, confirms a news report last year based on secret government information exposed by whistleblower Edward Snowden, and revealed that the NSA has been doing far more than just collecting meta-data of Americans’ phone calls. Clapper’s acknowledgement also contradicts assurances by President Obama that the NSA was not listening to Americans’ phone calls.

6. And the Sierra snowpack measured at just 32 percent of normal yesterday — an improvement over previous months, but still far short of the state’s water needs, the Mercury News$ reports.