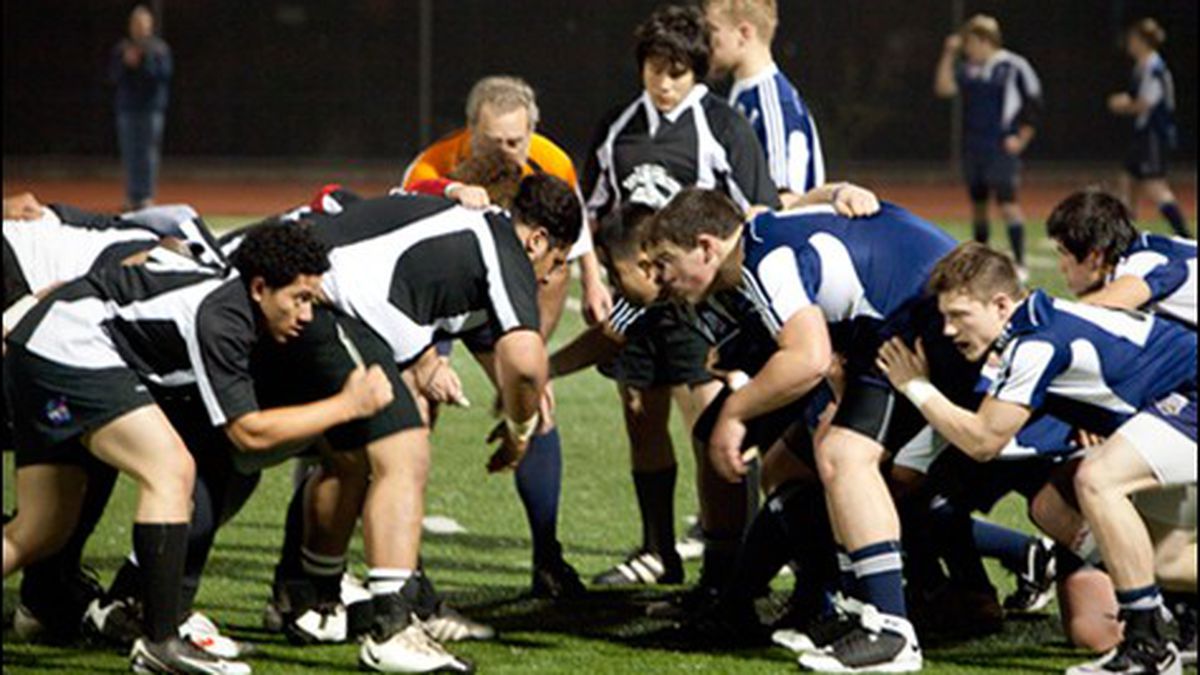 Way of the Warthogs

In Oakland, rugby dissolves class divisions, teaches self-discipline, and builds character. It might even save lives.

On a frigid night in January, two high school rugby teams faced off at Witter Field in Piedmont. The Piedmont International Touring Side (PITS) wore crisp blue and white uniforms, representing a 33-year-old lineage of rugby greatness. The Warthogs, who hailed from neighboring Oakland, wore black and white. Colors were just one way of distinguishing between the two teams, one entrenched and well-resourced, the other struggling to establish itself. The PITS tours the world every year, usually traveling to Canada and sometimes going as far as England or Ireland. The Warthogs are still looking for a home field — right now they practice in the baseball diamond at Brookdale Field in East Oakland. At this game, PITS’s players, including subs, outnumbered the Warthogs by a ratio of 2 to 1.

Judging from the intense, pointed looks of spectators, many would probably concur. The teams divided their scrimmage into four twenty-minute quarters, as opposed to the forty-minute halves that comprise a normal rugby game. The first two quarters unfolded as one might expect: Piedmont scored two tries (the equivalent of a goal), beating their opponent by a formidable fourteen points. Sagehorn watched from the sidelines. “They’re quiet,” he said. “When boys are quiet, it means they’re nervous.”

By 6 p.m., the Warthogs, who had only one sub, looked bushed. Coaches Mike Spencer, Soni Tupouata, and Ryan Burke gathered their team for a huddle. “We need to knock off the swearing,” Burke said. “We’re here, and we’re representing Oakland. Now I haven’t always been the best example,” he continued, as a couple players smiled knowingly. “But if you need to swear, do it in your mind, or do it under your breath.”

Team captain Olosetti Fifita cut in. “Man, when the referee calls a penalty, don’t sit there and cry about it,” he said. The players nodded. Spencer offered bits of strategic advice. “Remember your stone wall,” he told the players. “We should have ten guys evenly spaced. Keep your defense up.”

Apparently, the players took those suggestions to heart. In the next quarter they put up a stout offensive line against the PITS’s “frosh-soph” team (which consisted of Piedmont’s younger, less experienced players). Flyhalf Tolinisi Palu threw a couple of fake passes and then made a fast-break to score a try. A few minutes later Fifita scored after stealing the ball and sprinting downfield. Burke beamed. “Get ready!” he shouted, as a PITS player punted back.

After three hours of nearly continuous play, the teams decided to call it a night. Spencer said they hadn’t really kept score. The whole idea was to have a friendly scrimmage to prepare the kids for their 2011 season. In that sense, it was a rousing success. “Great match on Saturday night in Piedmont between the Warthogs and Piedmont International Touring Side (PITS Rugby),” Spencer wrote in a blog post the following day. “Perhaps some stereotypes were broken — they aren’t rich snots and we aren’t ghetto thugs. About 50 kids played a hard match, tackled each other, had bloody noses, made exciting bursts, released aggression, shook hands and then had burgers together. Coaches from the teams later joined for a couple beers and some food.”

Spencer and the other coaches enjoy looking at rugby from a utopian angle. It helps teach sportsmanship, build character, and melt class divisions, they say. On Saturday, kids played through injuries — one of the PITS’ players had two wads of toilet paper sticking from his nostrils, to help stop what was obviously a severe bloody nose. Kids were told to treat each other respectfully, to heed the referee, and to stop swearing. Supposedly, PITS coach John Cullom makes his whole team do push-ups if one person uses foul language (including the expression, “My bad,” which Cullom finds distasteful). In short, it’s not just about playing rugby, said Sagehorn. It’s about preparing high school kids for the real world.

But it’s still hard to ignore the rift between the PITS and the Warthogs, whose players obviously come from different walks of life. Driving five of his players home that night, Spencer passed a crime scene at the 5800 hundred block of Bancroft Avenue in East Oakland. Fifteen-year-old Lovell Hadnot had been fatally shot while crossing a parking lot, around the same time the Warthogs were warming up. “What was weird was that we treated this as just another landscape, call it ‘Yellow Crime Scene Tape at Night,'” Spencer wrote in his blog. “I think the boys and I made a casual remark like, ‘Oh, someone got shot.'”

Spencer, who works by day as a private investigator, has seen his fair share of yellow-tape homicides in Oakland. He’s particularly shaken when the victims fit roughly the same profile as the kids on his rugby team. Hadnot was one such person — a student at Fremont High School who was about their age, and grew up in the same neighborhood. “It’s just that our program gives kids something positive to do so they hopefully don’t meet the same fate,” he wrote.

And the Warthogs players certainly aren’t inured to what’s happening all around them, Spencer pointed out. For many of them, violent crime is a familiar part of life. They’ve learned to shrug it off. They’re encouraged to vent their frustrations on the field.

For many of them, rugby provides a useful outlet. Some keep playing for years. Fifita, who attends Castlemont High School in East Oakland, says he actually started playing in seventh grade. He loves the comradery. So does Jose Peña, who came to rugby as a sophomore at American Indian Public Charter School, and went on to play for Cal. His brother Eric is the Warthogs’ current scrum-half (which is similar to a quarterback in football). For some people, it’s become a family tradition.

Twelfth grader Mafoa Tongauiha, who serves as an offensive forward (or “prop”), hews to Spencers’ philosophy of rugby-as-therapy. “I just got my anger out on the field,” he told Burke after the game on Saturday. “I pretended it was you.” He grinned as the coach looked back quizzically. “Ha ha. Just playin.'”