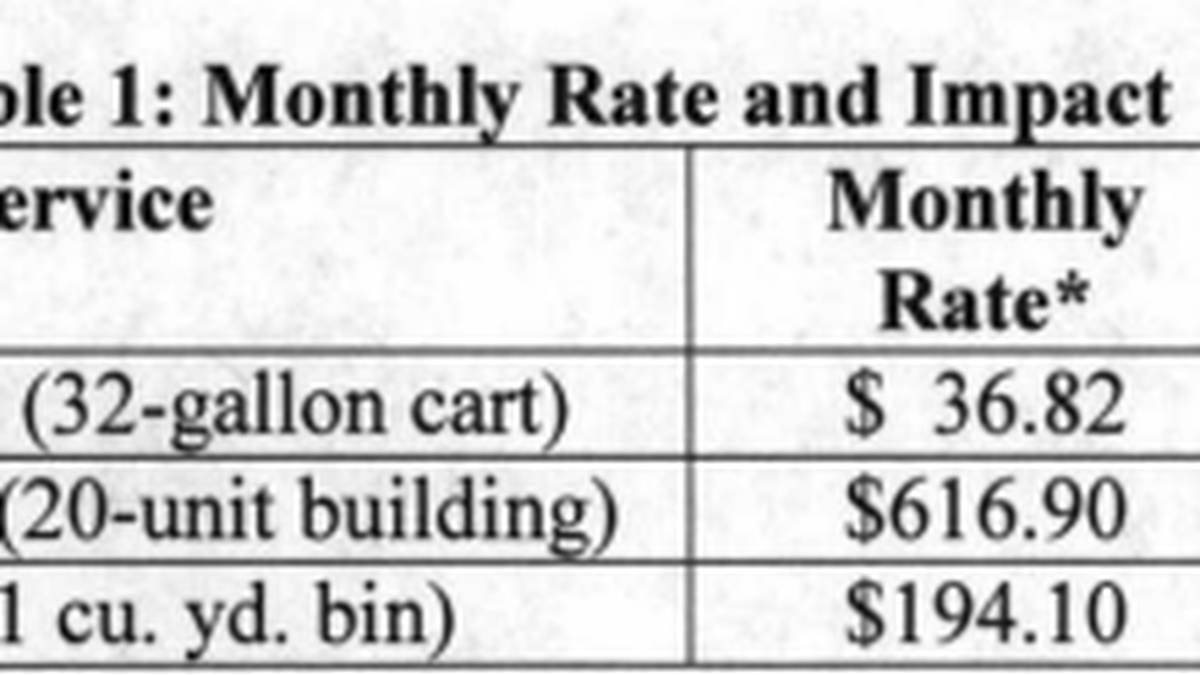 by Sam Levin
Sep 23, 2014
Waste Management, the Texas-based corporation that sued the City of Oakland after losing out on the city’s lucrative waste contract this summer, has won back trash services, ending a long and messy fight for the $1 billion franchise. The City Council last night approved a compromise deal that would allow Waste Management to continue doing trash pickups in the city, while California Waste Solutions (CWS), a West Oakland-based firm, will take over all of the city’s recycling. As part of the proposed deal, which Mayor Jean Quan first announced last Thursday, Waste Management has also agreed to drop its lawsuit and cover the city’s associated legal fees.

[jump] The compromise comes nearly two months after the City Council unanimously rejected Waste Management and awarded the entire franchise to CWS, the local company that currently does half of the city’s recycling, but has never taken on a residential garbage contract before. Waste Management — which currently does the other half of the city’s recycling and all of the city’s trash pickups — argued that CWS would not be prepared to do the job by July 2015 when the new contract begins. And the city’s own analysis of the two plans said that CWS was a much riskier choice.

Still, the council favored CWS at the end of July, in large part because the firm offered significantly cheaper rates than Waste Management and was a locally grown company. But the fight for the ten-year franchise did not end there. Waste Management subsequently filed a suit against the city, arguing that the city abandoned its procurement process and allowed CWS to submit a last-minute proposal after the firm had already seen Waste Management’s confidential information.

Soon after that, Waste Management also launched a controversial referendum drive seeking to rescind council’s decision and allow voters to weigh in on the contracts directly through a ballot measure. The deadline to submit signatures — the company would need support from roughly 21,000 voters — is at the end of the week, which is partly why the council held the emergency meeting last night.

As part of the compromise, Waste Management has said it will also stop collecting signatures for its referendum. David Tucker, the firm’s director of community and public relations for the company, told me last night after the lengthy meeting ended that the company would be communicating with the so-called Oakland Residents for a Clean City coalition — the group Waste Management has funded to do signature gathering — to end the referendum effort. (One councilmember had complained that the signature gatherers were still operating even after the companies unveiled a tentative agreement last week).

Six councilmembers last night voted in favor of the new plan, though several argued in speeches that they felt Waste Management had effectively bullied the city and left the council with no other options. City Councilmember Desley Brooks slammed Waste Management for its tactics, arguing that it had been dishonest throughout the process, and ultimately abstained from supporting the plan. Councilmember Larry Reid was absent.

Although the path to this compromise was rocky at best, the final outcome is a plan that has much cheaper rates than the ones originally proposed over the summer in a possible Waste Management-CWS joint scenario. In July, the city said a combined Waste Management-CWS plan similar to the one the council approved last night would lead to a 47 percent rate increase for single-family homes to $43.70 a month, and a 38 percent increase for twenty-unit buildings to $653.22 per month (the rates for buildings vary depending on the number of units).

Under the plan approved last night, the city gets services from both companies at the lower rate that CWS had proposed in its July plan. That comes out to a 24 percent increase for single-family homes to $36.82 per month, and a 30 percent increase for twenty-unit buildings to $616.90 per month. From the city’s 190-page report on the new plan (PDF viewable here), here’s a graphic explaining the rates:

City Councilmember Lynette Gibson McElhaney, who helped negotiate the compromise with the companies, said in a press release after the late-night vote that this deal puts an end to the “David vs. Goliath battle over the future of Oakland’s trash pickup.” Her office pointed out that under this franchise, the two companies will be partnering with Civicorps, a local job training organization, to do some of the city’s composting, and with the East Bay Municipal Utility District to establish a waste-to-energy program. Here is her office’s summary of the plan:

The Alliance between CWS and WM is historic, and the eyes of cities and communities across the nation are watching closely as the City of Oakland launches a model that benefits a growing local business, an existing long-term vendor, and the entire Oakland community. The model agreement allows for the following: (1) The entire recycling portion of the contract will be managed by CWS, thereby doubling their business and providing new employment opportunities for the local community; (2) CWS will continue to expand their footprint with the $40 million purchase of the cleanest emission trucks available; (3) CWS will continue with its plan to build an $80 million state-of-the-art recycling facility on the old Army Base in West Oakland; (4) WM will continue to provide refuse collection services throughout the City of Oakland; 5) WM will join CWS in its partnership with Civicorps, a local youth employment and job training enterprise; (6) East Bay MUD will now receive Green Waste so Oakland’s restaurant food waste can be turned into clean, green electricity at EBMUD’s Oakland waste-to-energy plant; (7) CWS and WM union employees will have their jobs protected; and (8) Oakland ratepayers will get the BEST PRICING as originally proposed by CWS cutting in half the proposed rate hike proposed by WM earlier this year.