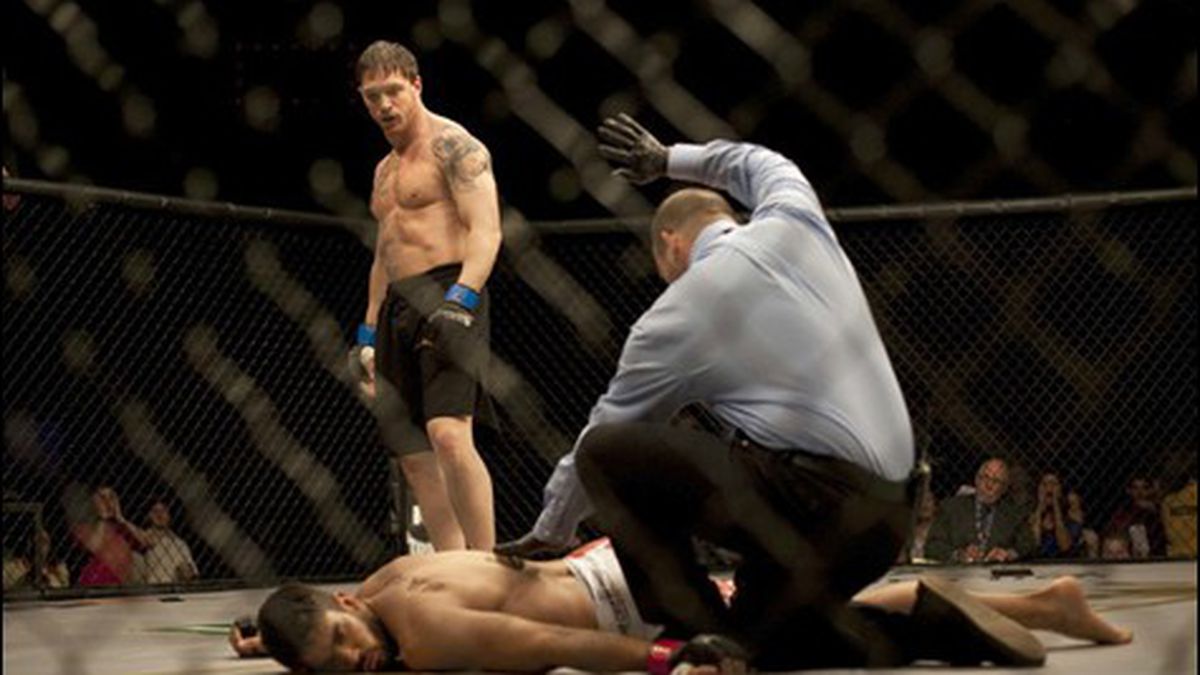 Let's hear it for the underdogs.

There are a few corny moments in Warrior — actually more than a few — but they’re outweighed by the basic ingredients of character and acting embodied in Tom Hardy and Joel Edgerton, who play tough-guy brothers trying to clean up their past, present, and future by beating other people’s brains out in the mixed-martial-arts prize-fighting cage.

Without these two actors in the lead roles of Tommy Riordan (Hardy) and his estranged brother Brendan Conlan (Edgerton), filmmaker Gavin O’Connor’s family-brawl-style actioner would be just another bit of fistic folderol. They focus the screenplay’s energy — O’Connor co-wrote the story with Cliff Dorman, then adapted the screenplay with Dorfman and Anthony Tambakis — so completely that they could put it across even if it were the story of long-lost-sibling badminton players.

Muscle-bound London native Hardy supplied the beefcake in Inception and Marie Antoinette, but his real claim to fame, up to now, was his remarkable portrayal of a defiantly nasty convict, the brutal title character of Nicolas Winding Refn’s Bronson. His Tommy in Warrior gathers in all that physical ferociousness and directs it toward two goals. They are: getting even with his father, reformed drunk and wife-beater Paddy Conlan (Nick Nolte in full smoked ham mode), for driving the young Tommy and his mother from their home; and winning the big Sparta world championship fighting tournament in Atlantic City. Then there’s that little matter of Tommy’s service record — he went AWOL in Iraq, but not before rescuing his Marine comrades under fire. I told you it was corny.

Paddy’s younger son Brendan, meanwhile, copes with the sad memories by raising a family with his wife Tess (tender-faced Jennifer Morrison) and quietly teaching high-school physics in the Pittsburgh, Pennsylvania area. But he’s got money problems. His home mortgage is upside down, and he resorts to moonlighting as a semi-pro bar fighter to raise cash. The $5 million Sparta prize would be his salvation. Australian product Edgerton (his Blue Tongue Films made Animal Kingdom and The Square) has an amiable screen presence that contrasts nicely with the hate flowing out of Hardy’s Tommy. Both men are contemptuous of their father, and Tommy resents the fact that Brendan stayed behind with Paddy instead of running away with him and their mom years ago. Individually and in their brief scenes together, Hardy and Edgerton bring a rare, polished, masculine sensitivity to the clichéd scenario. Their shared anger finds an outlet in the fights: Tommy is the powerful puncher, Brendan has superior wrestling skills.

The rest of the show needs work. Paddy goes around listening to the audio-book version of Moby Dick and hallucinates Captain Ahab when he falls off the wagon. Director O’Connor skimps a little on the fight action — too many close-ups and audience-reaction cutaways. The evil Russian behemoth fighter looks like a refugee from a Jean-Claude Van Damme movie. But O’Connor drives the battling underdog brothers all the way to the predictable ending as if the devil were chasing them. An adrenaline-soaked Saturday matinee type of movie.

Lonely at the Top