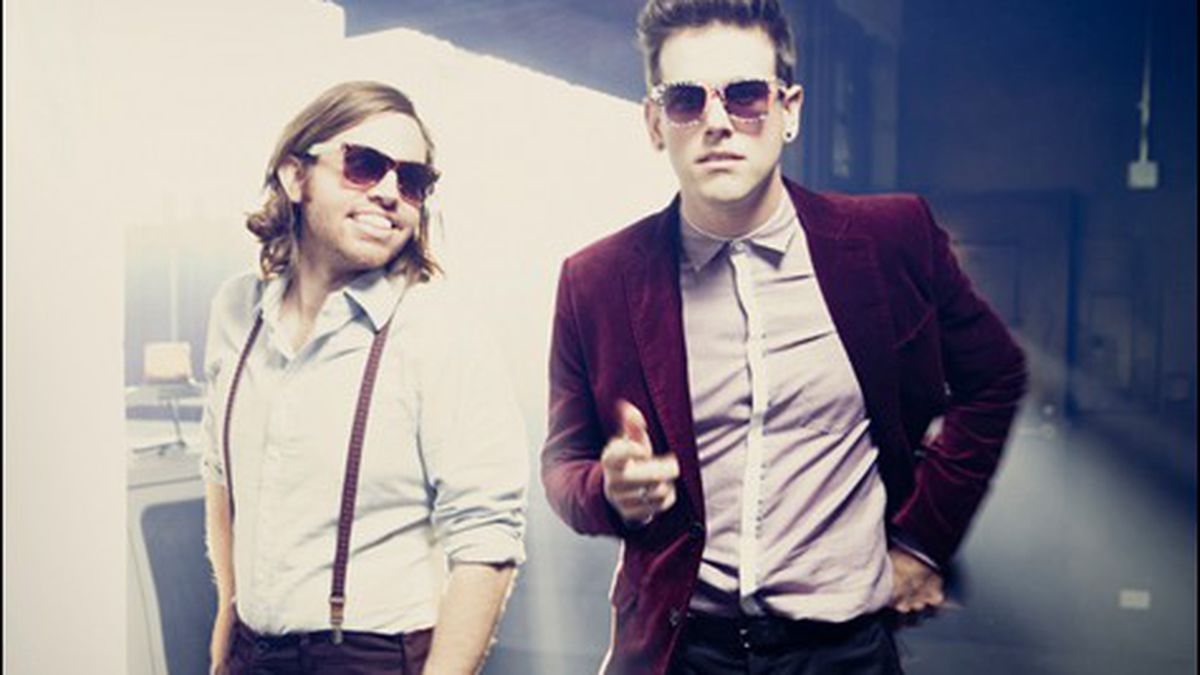 The electro-pop duo Midi Matilda started as a studio project but has grown into one of the Bay Area's most solid live acts.

When Skyler Kilborn and Logan Grimé formed the electro-pop outfit Midi Matilda in late 2011, they agreed on a plan: Instead of posting fliers on the street and begging friends and family to show up to their gigs, as they had done for years while playing in alt-rock bands, they would spend a year perfecting their sound in the studio before committing to a show. As it turned out, the San Francisco-based duo ended up making its debut only a few months later, in March 2012, to a sold-out crowd at Cafe du Nord. But Kilborn and Grimé have no regrets. On May 17, they’ll play their first headlining show, at Rickshaw Stop, and this summer, they’ll perform at Outside Lands as one of only a handful of local bands asked to play.

“It used to be, play shows to promote a record,” said Kilborn during an interview, as Grimé nodded emphatically next to him. “Now it’s like, create the content and ‘the world’ to make the show happen.”

Their approach seems to be working: The music video for their first single, “Day Dreams,” currently has more than 117,000 views on YouTube, and the track has been picked up by Hype Machine and the blog Neon Gold Beat Company. The Huffington Post ran a feature on them in April 2012, although Kilborn says the site misquoted him and made them “look like dicks.” Still, the attention has only helped the quickly rising duo.

Grimé and Kilborn met at Emeryville’s Ex’pression College for Digital Arts in 2008. They both had backgrounds playing in relatively unknown grunge and indie rock bands: Grimé as a drummer and Kilborn as a guitarist. They briefly played together in what they described as an “Against Me!-meets-Tom Waits-meets-Foo Fighters”-esque group called Bullets Can’t Kill Danny, but the group quickly disbanded, leaving Grimé and Logan thinking about what to do next.

“We both come from a background of rock,” Kilborn said. He further clarified: “Of rocking out.” But they also had a love of pop music.

Inspired by the Canadian electronic act Chromeo (also a duo) and the ability of technology to create “invisible band members,” Kilborn and Grimé started crafting pop songs, hopeful that they would translate to a live setting with the help of playback tracks. The five songs that ended up making it onto Midi Matilda’s debut EP, Red Light District — which was released on Bandcamp in February 2012 — are driven by layered vocals, woozy synths, clean and concise drumming, and straightforward hooks. The sound is tight, intricate, and pure pop: headphone music for the fatigued nine-to-fiver daydreaming about the weekend.

The band has paid equal attention to its image. Grimé directed and shot the video for “Day Dreams” over the course of ten nights in San Francisco and Berkeley. He first filmed himself and Kilborn running and dancing in a studio, then captured each individual frame — 3,300 in total — and projected them onto thousands of surfaces around the cities. Then they sent the video to blogs they’d read and liked, with no PR machine behind them.

“So many people get lost in the idea that they need to have a band to present to people in person,” Grimé said. “I’m like, come up with a world and show them through the amazing Internet that everyone has, and then they will come [to a show] to experience that thing.” Grimé said he believes YouTube, music blogs, and social media trump a packed music venue any day. “But to each their own,” he added, diplomatically.

Still, Midi Matilda’s music is perhaps most transformative in a live environment. At San Francisco’s Fillmore last January, where Midi Matilda opened for Geographer, Grimé was a fleshy manifestation of The Muppets’ Animal: He played with his mouth open, beamed at the audience, frequently gave “what’s up” nods to the crowd, shimmied, and shook. Kilborn, who sings and plays guitar and a Kitara, was equally as charismatic, even manning the drums at one point to let Grimé dance at the front of the stage. Another time during the show, the two walked away from their instruments and let the Kitara do the work as they performed a synchronized boogie for the crowd. By the end of the show, it was clear why the duo had been chosen to open for Shiny Toy Guns, The Dirty Heads, and Oh No Fiasco; had managed to sell out shows; and had earned a coveted spot in the Outside Lands lineup: Its talent goes beyond studio wizardry or one viral video.

Grimé said the band carefully studied Chromeo, as well as also other artists in the electronic music scene, when crafting its live performance. While Grimé said he doesn’t consider himself an expert in the genre, he’s watched its fanbase explode both online and on tour. “The audience just goes apeshit,” he said. “The production and the sound and the vibe and the energy of all the people is something that I feel isn’t tapped into by the rock shows.”

Grimé and Kilborn said they also admire artists who put on shows with big production values that aim to fully entertain; Kilborn cited Michael Jackson as an obvious example. While using playback tracks is necessary to achieve this vision, Kilborn explained, he doesn’t want to use them at the expense of the spontaneous energy of the live show: “I try to incorporate some chaos into the perfection of a playback track, just to try to add some kind of inconsistency so that it’s different every show,” he said.

The band is currently working on new material, but no release date has yet been set. In fact, the guys have been so busy playing live and writing songs that they couldn’t remember the last time they sat down and just jammed for fun.

“A couple of months ago, I think,” said Kilborn.

“Couple of months? I’d say a couple of years,” Grimé replied in disbelief.

Editor’s Note: A previous version of this article misidentified the instrument that Kilborn plays; it’s actually a Kitara, not an iPad. This version has been corrected.