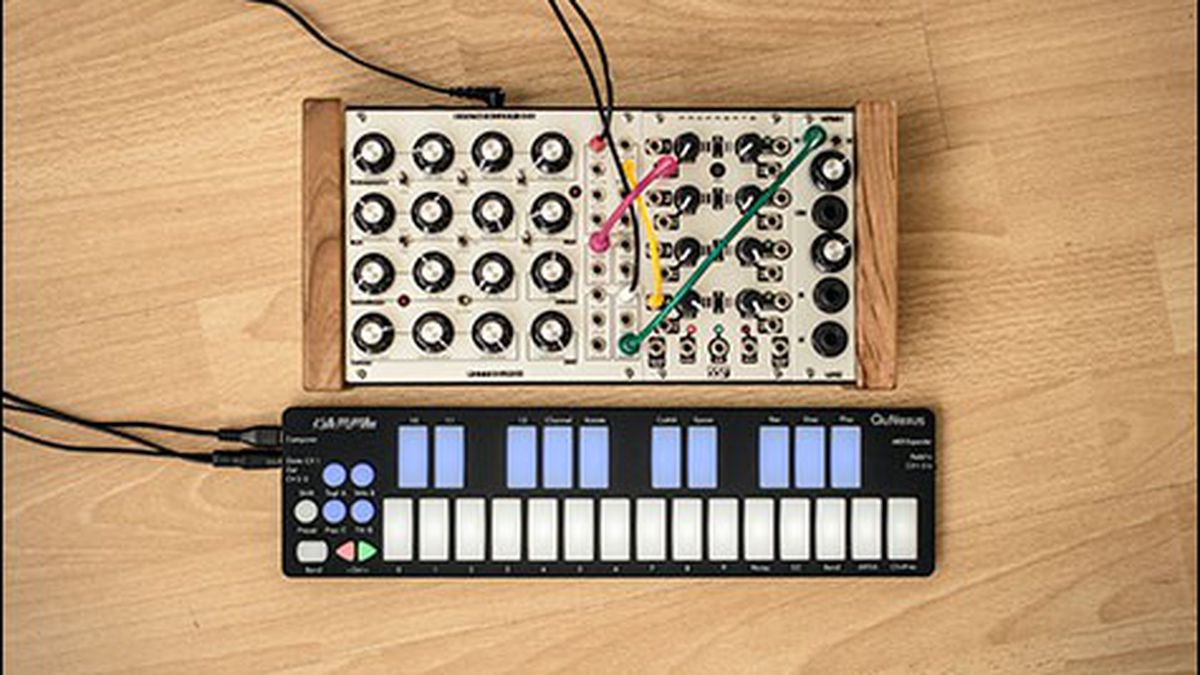 Switched-On Bach outsold every classical album that had come before it. In 1968, composer Wendy Carlos performed Bach pieces on Dr. Robert Moog’s early analog synthesizer systems and convinced a skeptical Columbia Records to release the recorded result. Switched-On Bach shattered expectations. It reached number one on the pop charts the following year, and spawned a glut of imitations. Most importantly though, Switched-On Bach exposed a mass audience to an entirely new palette of electronic sounds. Among those radicalized by the recordings was Keith McMillen. “I lusted after control of those sounds,” he said. “Being a guitar player at the time, they just weren’t available.” McMillen’s guitar wouldn’t sound like a Moog, but synthesizers lacked the gestural sensitivity of stringed and acoustic instruments. In essence, the instrument builder’s three-decade career has sought to give electronic sounds the expressive physical interface that he cherished in a guitar — and usher in a new musical movement in the process.

At the West Berkeley headquarters of Keith McMillen Instruments, a company founded by its namesake in 2005, about fifteen employees labor to solve the problem posed by Switched-On Bach. Programmers rattle computer keyboards in one nook, while soldering irons flicker in two cluttered engineering rooms. Upstairs, there’s a tidy space where Matt Hettich, the company’s product specialist, demonstrates gear. Like most of the company’s employees, Hettich began working at KMI after graduating from the music program at Mills College in Oakland, where he wrote about electronic music performance for his master’s thesis. In the demo room, he showed off two of the company’s recent devices, QuNeo and QuNexus. They were connected to a computer, modular effects processors, and synthesizers produced by the local companies Dave Smith and Oberheim.

In practice, most musicians use these devices to control MIDI — the digital information produced by computers that constitutes sounds. The QuNeo, which raised eleven times its crowdfunding goal for initial manufacturing in 2012, is the size of an iPad, with raised pads in a variety of shapes. The QuNexus is distinguished from the QuNeo by its shape, which is similar to a keyboard, and its ability to control analog as well as digital sound. Through the company’s software, users assign every pad a specific sound. For the QuNeo, users can assign different sounds to the four corners of every pad.

Beneath the device’s polyurethane exterior rests Smart Fabric, a malleable textile with integrated digital parts. KMI was the first company to use Smart Fabric for instrument design, and McMillen worked personally with a local manufacturer to refine the material. Used in almost all KMI devices, Smart Fabric provides the sensitivity that McMillen sought in electronic interfaces since first hearing Switched-On Bach. Smart Fabric makes KMI devices sensitive to the velocity at which a user strikes each pad, the location within each pad that a user strikes, and the pressure that a user continues to apply after striking. In addition to assigning sounds through KMI software, users can manipulate the parameters of how such physical gestures affect the sounds. Smart Fabric takes live electronic music from an activity akin to typing on a laptop all the way to a physically expressive performance. For instance, the pad’s pressure sensitivity can be programmed to shift the pitch of a given note to mimic a guitarist who stretches a string — and much more.

Hettich explained the devices with exacting technical precision, like an engineer speaking to an electronic musician. His delivery was a reflection of KMI’s core consumer group: innovative musicians seeking to push their instruments’ sonic and expressive limits. Like McMillen himself, many users arrive at KMI gear hoping to defy electronic music’s limited response to physical gestures. The guitar iconoclast Adrian Belew uses a QuNeo to manipulate an array of effects kept in what he calls the Magic Closet. Other users include the experimentalist Dan Deacon, members of the Anticon hip-hop collective, and producers working with acts such as Skrillex and The Weeknd. The crew behind hip-hop artist Childish Gambino’s live show even uses KMI devices to control lighting and visuals. The theme that echoes throughout artist testimonials about KMI devices is relieved frustration. What seemed impossible, their praise goes, actually isn’t.

McMillen built his first piece of gear — a guitar amplifier — at the age of ten. “I couldn’t afford one,” he said. “I was happy to make something that didn’t electrocute me and made the guitar louder.” Throughout high school, he played in bands and pondered the possibilities of creating an interface for instruments and computers. At the University of Chicago, he took composition courses and earned an engineering degree in acoustics. Attracted to the musical and technological innovation of Bay Area synthesizer luminary Donald Buchla and pioneering institutions like the San Francisco Tape Music Center, McMillen moved to town in 1979.

That year, he founded Zeta Music. The company rose to prominence for producing electric violins and modules to synthesize string sounds. Laurie Anderson, the composer behind 1982’s surprise pop hit “O Superman,” commissioned an electric violin. In 1992, Zeta made an electric viola at the request of the Kronos Quartet. In 1998, Zeta’s electric violin graced the cover of Playboy magazine’s Sex and Music issue. Zeta enabled string players to amplify their sound and retain the instrument’s timbre. It also reversed the process by synthesizing the sound of string instruments electronically. Though the company practically invented and dominated a new instrument market, it didn’t quite fulfill McMillen’s lifelong goals quite like his work under the KMI banner.

In 2004, McMillen established the nonprofit organization BEAM with the stated goal of fostering a new musical movement called NuRoque. The name referred to the 17th-century emergence of Baroque music, which McMillen considered an important revolutionary period because new technology expanded composers’ creative possibilities. McMillen thought that the help of computers in composition — and collaboration — was underexplored. The line of thought created a personifying habit, where components are said to “talk” to one another and “understand” the physical expression of human operators.

“If you’re focused on building tools, it’s very different from using them,” McMillen said. Under the BEAM banner, McMillen founded Trio Metrik to perform NuRoque. A typical Trio Metrik performance featured McMillen on guitar, an electric violinist, and an electric stand-up bassist, all flanked by monitors. Computers interpreted the string-playing in real time, then provided visual feedback, which the performers used in turn to influence the parameters of their improvisation. The goal was to spontaneously collaborate in tandem with computer systems.

Trio Metrik toured rigorously for two years before McMillen encountered more problems to engineer his way out of. The equipment was too large and too costly; these obstacles pivoted him back to starting his current instrument company. Plus, his long-standing dream of being able to control electronic sounds by gesture remained incomplete. NuRoque had to wait.

Keith McMillen Instruments shipped its first product in 2008. Most recently, the company unveiled the StrongArm, a piece of guitar hardware that allows notes to sustain indefinitely. McMillen said that the tool took 35 years to make. McMillen’s products solve the problem posed to a young guitarist enraptured by Switched-On Bach, and strive to defy the limitations he’s encountered since. Still, McMillen predicts that when his inventions allow enough expression, sound, and practicality, he’ll stop building. “I basically told myself that once I was done with all of these instruments,” he said. “I’d return to making music.”

The Last Days of La Borinqueña