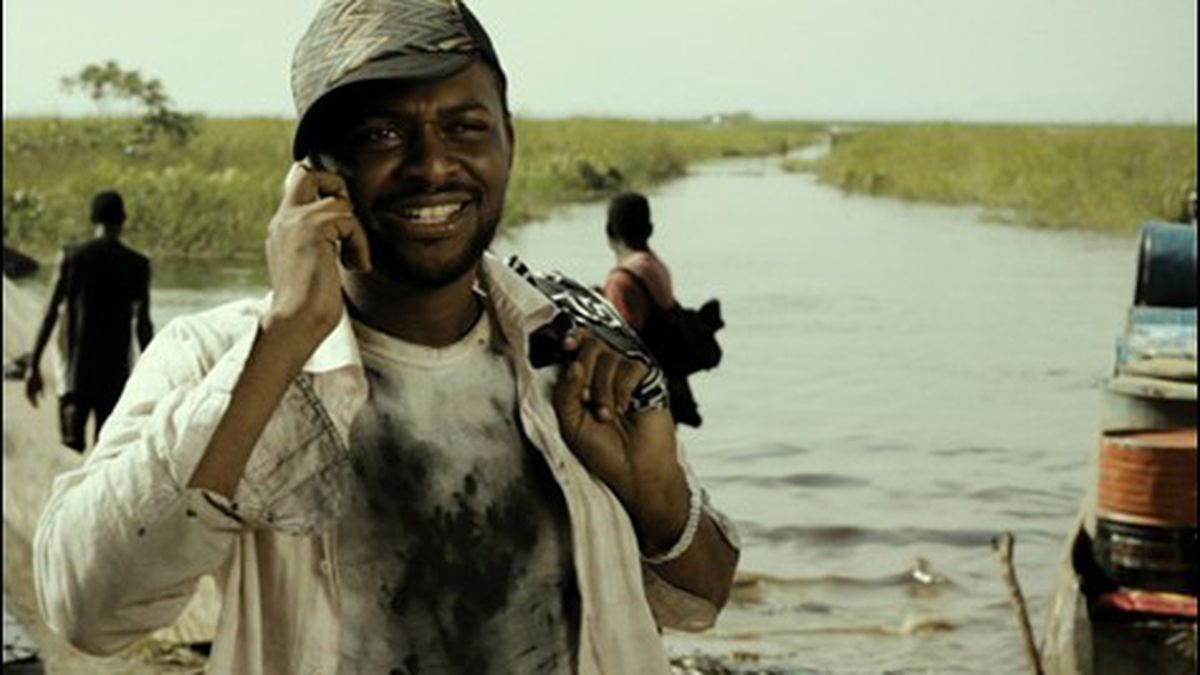 Films produced in the Democratic Republic of the Congo are necessarily scarce in US theaters. Generally speaking, there are none. Almost as rare is a sub-Saharan African production that doesn’t fall into either the documentary or “village picture” narrative categories, so beloved of film festivals but hardly mass-market crowd pleasers.

Viva Riva!, the feature film debut of Congolese filmmaker Djo Tunda Wa Munga, takes the proposition into an even more unlikely realm — it’s not only an eye-popping glimpse into a society most American movie audiences have never heard from, but also an energetic, boldly entertaining variation on the gangster genre, with local flavor that just won’t quit.

Unfortunately, “local flavor” in the DROC all too often consists of violence and civil chaos. The country formerly known as Zaire has been in the grip of one type of conflict or another since 1994, much of it a spillover from the problems of its warring neighbors, particularly Rwanda and Uganda. It’s presently governed by President Joseph Kabila — son of assassinated president Laurent Kabila — as a fragile coalition of opposing factions. Instability is a way of life, and from the very first scenes of the capital, Kinshasa, with its Plus de Carburant (out of fuel) signs on rundown gas stations and rolling electrical brownouts, we’re plunged into an African version of the Wild West.

Riva (played by Patsha Bay Mukuna in his screen debut), an ambitious Congolese racketeer now based across the border in Angola, hits town with the answer to the fuel shortage — a large shipment of hijacked gasoline. He and his pal J.M. (Alex Herabo) sell a share of the smuggled gas for fantastic fistfuls of Franklins and immediately set sail for the nearest brothel and nightclub. Kinshasa native Riva is out to prove himself a big man in his hometown. A certain César (Hoji Fortuna) begs to differ — he’s an Angolan crime boss who believes the stolen gas belongs to him, and he and his goons systematically ransack Kinshasa looking for Riva.

Riva runs afoul of a tough female police officer, the high-spirited Madame la Commandante (Marlene Longage), and her lesbian lover Malou (Angelique Mbumb) — luckily for him they’re always close by, even when the police woman goes undercover in the guise of a nun. The parish priest runs a hideout operation at US$500 a pop — he’s a player, too. Meanwhile Riva’s sidekick J.M. has a disapproving wife at home who curses Riva for ruining her family; that echoes Riva’s problems with his own parents, ashamed of having a crook for a son.

The characters merrily bounce around from fistfights to sex to gun battles, the screenplay peppered with jokes and salted with copious bloodletting. The mood is exactly like an urban actioner from the grindhouse days: Seventies look, Seventies pacing, Seventies acting, Seventies plot. Welcome to the New Blaxploitation, Back-to-Africa Edition, with everything that entails.

In place of Fred “The Hammer” Williamson and Pam “Foxy Brown” Grier, first-timer Patsha Bay Mukuna portrays aggressive Riva with the appropriate blunt criminality, while Ms. Malone, faced with the choice of playing it crude, nude, or rude, opts for a display of skin. As in the Seventies, the real stars of the show are the nutty people sneaking around in the near background, like New York actor Fortuna as the icy killer César and Longage’s outrageous Mme. La Commandante. They evoke the same unpredictable tongue-in-cheek menace as a combo of Antonio Fargas, Sid Haig, and Shelley Winters.

Viva Riva! is reportedly the first film made in the Democratic Republic of the Congo in twenty years and the very first in the Lingala language. Writer-director Munga, born and raised in Kinshasa with a film-school stint in Brussels and a career as a maker of documentaries, arrived at his gaudy, histrionic style in a calculated effort to show off his homeland and to get it right — warts and all.

The theatrical version of the film is strictly for the international export market. According to the press notes, Kinshasa has no movie houses. That lack evidently dates from an old Belgian colonial mandate that the locals should not be allowed to see movies because they were unable to distinguish between fiction and reality. Times have obviously changed. In the year 2010, when this DROC-Belgian-French co-production was shot on location, the nouveau-Blaxploitation gambit fits in perfectly with a place that still remembers Muhammad Ali and George Foreman’s 1974 “Rumble in the Jungle” heavyweight championship boxing match.

One of the most striking threads in When We Were Kings (1996), the documentary record of the hoopla surrounding the Ali-Foreman fight, was the omnipresent, spontaneous live music on the streets of Kinshasa, performed by dozens of local musicians. Munga and composer Cyril Atef aka CongopunQ pay tribute to the city’s infectious rhythms in every scene of Viva Riva! with an update of the classic Congolese sound, featuring guitarists Flamme Kapaya and François Luambo Makiadi, singers Papy Mbavu and Franklin Boukaka, and contemporary techno-African dance music by Werrason and Radioclit, among others. The music is inescapably intense, and so is Viva Riva! &#8;