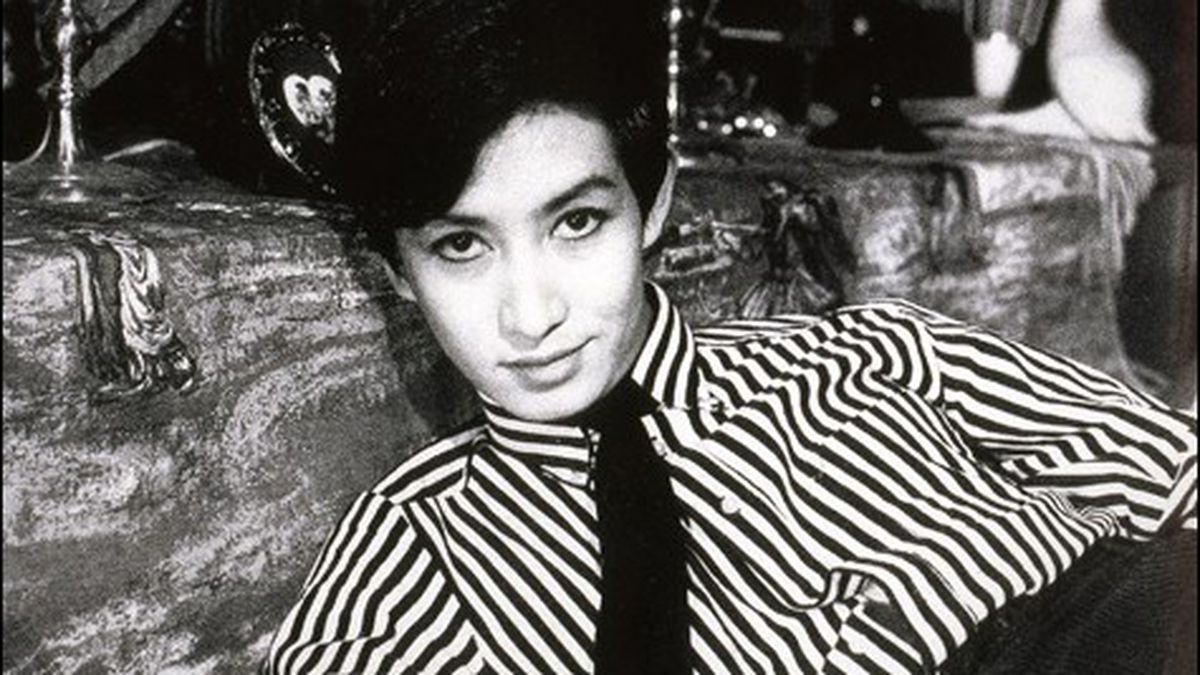 Adam, the lead character in Lucky Kuswandi‘s deceptively madcap Madame X, has to be the unlikeliest community leader in Indonesia. As a pre-op transsexual hairdresser trying to save up money for his operation, Adam (played by Aming Sughandi aka Amink) spends most of her/his time flirting with customers and her “sisters” at a Jakarta beauty salon and projecting an overabundance of Java bling-bling.

But Adam has a date with destiny. Members of the National Morality Front, a vehemently Islamist political organization with a strict program that forbids homosexuality, attack Adam and her friends at a nightclub, and she ends up thrown off the back of a flatbed truck on a country road. As luck would have it, the battered Adam is taken in by tranny mother figure Aunt Yantje (Ria Irawan) and her partner Uncle Rudi (Robby Tumewu), who teach her the Lenggok dance — a miracle-working combo of traditional choreography and disco prancing. Dance-crazy Adam is a natural. Voila! Ultra-frivolous Adam becomes superhero Madame X. And ladyboys save Indonesia from hypocritical haters.

Frameline, the San Francisco Lesbian-Gay-Bisexual-Transgender Film Festival running June 16 through 26 at various venues in San Francisco and Berkeley, couldn’t hope for a better emblem for its 35th edition than Madame X. Not only does she assert the right of her fellow trannies to love whomever they want, but she also helps expose a guest-worker scam preying on village girls looking for jobs in Middle Eastern countries. When Madame X battles Kinky Amalia — an Indonesian Britney Spears perfectly willing to die for a handbag — the cartoon graphics say JROT! and NGOK! instead of BANG! and POW! The trannies’ message of tolerant tomfoolery ultimately prevails. Live and let live.

Madame X is only the pulpiest, most hysterical comic example of Frameline35’s focus on transgender, which includes another more realistic glimpse of Indonesia, Kathy Huang‘s Tales of the Waria, a documentary about traditional cross-dressers in that Southeast Asian country. Madame X and Tales of the Waria both screen Saturday, June 18, at the Roxie Theater (3117 16th St., San Francisco). There are more.

In Japan, we go behind the scenes for a profile of Miwa: A Japanese Icon, showing Monday, June 20, at the Castro Theatre (429 Castro St., San Francisco). Born Akihiro Maruyama in Nagasaki, the undisputed “King of Queens” took his/her cabaret drag act “underground” in the 1960s with starring roles in a pair of over-the-top films by director Kinji Fukasaku, Black Rose Mansion and Black Lizard — as the ultimate femme fatale criminal genius. The writer of both films and costar of Black Lizard was controversial novelist Yukio Mishima, Miwa’s off-screen lover. Despite a laughably bad singing voice, Miwa became not only a hero to the Japanese gay community but a full-fledged cultural superstar, with hit “protest” records and appearances in films by such directors as Beat Takeshi, Shûji Terayama, and animator Hayao Miyazaki — Miwa voiced villains in Princess Mononoke and Howl’s Moving Castle. The foreground of French filmmaker Pascal-Alex Vincent‘s worshipful documentary finds 75-year-old Miwa, with unearthly yellow hair in her nightmarishly decorated home, reminiscing about her life and career. It’s a hoot.

Compared to the celebrated life of Miwa, the two protagonists of Pietro Marcello‘s “docu-fiction” The Mouth of the Wolf (La bocca del lupo) exist on the outside edge of humanity. Rugged Enzo (non-actor Vincenzo Motta) and his longtime partner, transwoman Mary (Mary Monaco), essentially playing themselves, inhabit a depressing room in the slums of Genoa. Their milieu and love story — they fell in love in prison and Mary, who got out first, waited years for Enzo — show us the lyrical side of Italy’s Rust Belt, with antique footage and the nighttime antics at the Frisco Bar in Enzo and Mary’s Quarto dei Mille neighborhood merging into a classic “city symphony.” When we learn that Marcello’s documentary was commissioned by a Jesuit organization working to help the poor people of Genoa, it takes on added meaning. See it Wednesday, June 22, at Rialto Cinemas Elmwood (2966 College Ave., Berkeley).

But life is not all feather boas and falsies at this year’s Frameline. In Old Cats, a seventy-something Chilean matron named Isadora (veteran actor Bélgica Castro) discovers that she is slipping into dementia in her comfortable Santiago apartment, despite the kindness of her husband and the attentions of her pet cats. Comically aggravating the situation are Isadora’s selfish noodnik daughter, Rosario (Claudia Celedón), and Rosario’s lesbian lover, Hugo (Catalina Saavedra). If Ms. Saavedra’s name sounds familiar, it’s because she played the title role in the nimble 2009 Chilean character study The Maid. That movie was concocted by writers Sebastián Silva and Pedro Peirano, who in turn co-wrote and co-directed Old Cats. Expect the same combo of scathing social commentary and wistful, unforced pathos, reminiscent of a latter-day rethinking of Italian neo-realism, in the story of Isadora’s memorable afternoon. This may be the best film in the festival. It plays the Elmwood on Tuesday, June 21.

Are you ready to add another initial to the already ponderous LGBTQQ? Try an “A,” as in (A)sexual. Angela Tucker‘s humorous, thought-provoking doc explores a group of people who have staked out brand new territory in the sexual orientation land rush — that is, “non-sexual orientation.” Swank Ivy, David Jay, and the film’s other subjects are proud and defiant “one-percenters,” meaning they belong to the one percent of the population that has no sexual desire whatsoever, and they’re happy that way. Their motto is: “We love you, but not that way.” As one witness testifies, if it weren’t for the Internet, asexuals might never have connected with each other. Self-proclaimed asexual Janeane Garofalo is among the talking heads that address the question: How can you be asexual and still masturbate? Find out this Saturday, June 18, at the Roxie.

“Missing in Action” films represent a small but select category in this year’s Frameline. Gone and Looking for Simon deal with gay men who have seemingly dropped off the face of the earth, and both are set in Europe. Perhaps not so coincidentally, both the documentary Gone and the narrative fiction Looking for Simon suggest that official attitudes toward kidnapping and violent assault are different for homosexuals than for the general public. In director Gretchen Morning‘s Gone, American ex-police officer Kathy Gilleran travels to Vienna to find out why the local cops seem so uninterested in investigating the disappearance of her son Aeryn from a gay bath house. The German-French co- production Looking for Simon also proceeds from a mother’s point of view — Valerie (played by German actor Corinna Harfouch) goes to Marseille to search for her son, a doctor whose preference for Arab men and dangerous drugs might have played a part in his disappearance. Both films, especially the well plotted Looking for Simon, are powerful social statements with built-in dramatic tension. Gone shows Tuesday, June 21, at the Elmwood; Looking for Simon is at the Victoria Theatre (2961 16th St., San Francisco) on Friday, June 24.

A large portion of the offerings at any Frameline festival over the years has dwelt on injustices toward “different” people. The Swedes are past all that. Or so it would seem from Tova Magnusson‘s wry comedy Four More Years, the story of a closeted conservative politician from Stockholm who finds himself falling for a much more liberal colleague. Getting outed may hurt David’s (Björn Kjellman) chances, but not Martin’s (Eric Ericson). David’s wife, also a pol, is matter-of-fact about his infidelity — she wants her husband to drop Martin for political reasons. The only thing that really shocks these characters are budget proposals and Baptist bible thumpers. The film takes gay/bi status for granted. Its real comic target is right-left politics. Witty, observational, understated, and very Swedish, Four More Years plays the Elmwood on Monday, June 20.

In the cautiously recommended file are Cho Dependent, Lorene Machado‘s performance doc of comedian Margaret Cho, for Cho adherents only (you know who you are); Katie Wolfe‘s New Zealand Maori coming-out drama Kawa; the metrosexual Web sitcom We Have to Stop Now, with Cathy DeBuono and Jill Bennett as a mismatched couple; and Gun Hill Road, a transgendered-teen melodrama directed by Rashaad Ernesto Green, set in the Bronx and starring Esai Morales and Harmony Santana. It opens the fest at 7 p.m. on Thursday, June 16, at the Castro.

No such precautions are necessary for With You. Director Scott Gracheff‘s moving documentary tells the story of Mark Bingham, the Bay Area-bred gay man who may have led the decisive resistance against terrorism aboard United flight 93 on September 11, 2001 — and who perished in the process. Bingham’s mother, Alice Hoagland, emerges just as heroic as her rugby star son, who evidently always stepped up to help people in trouble. Despite the subject, the doc is upbeat, outgoing, and cheerful, just like Mark. He obviously got it from his mother. Don’t miss this when it screens at the Castro on Saturday, June 18. For up-to-date Frameline info, visit Frameline.org.