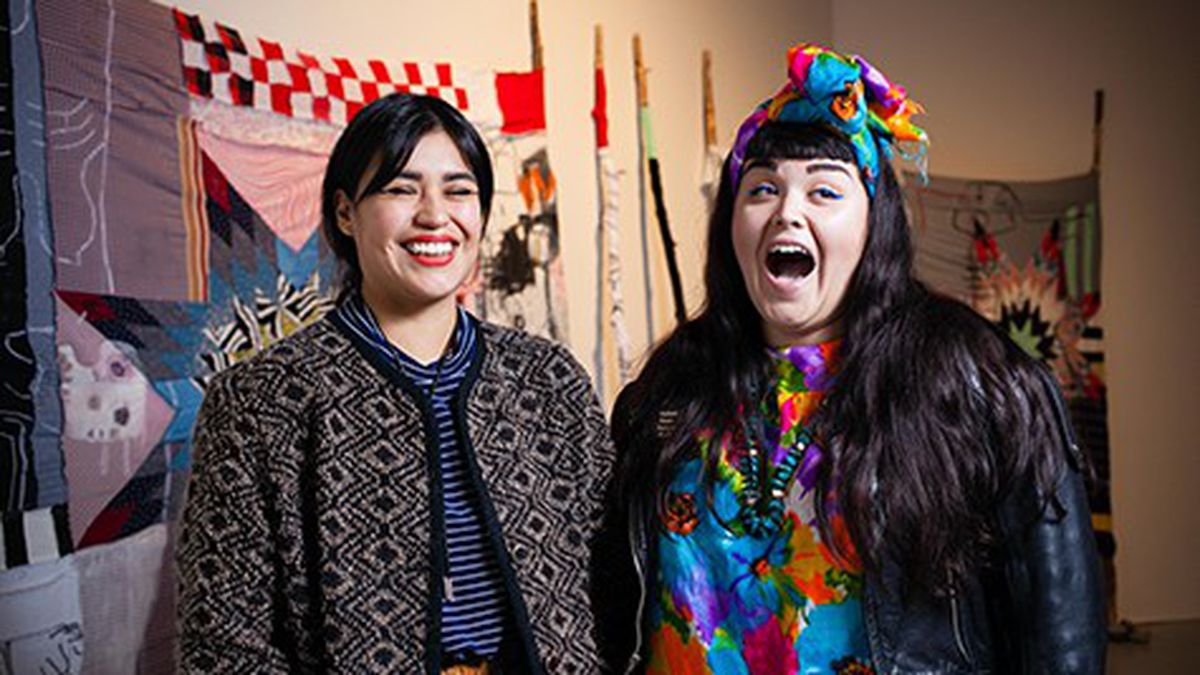 ‘Visions into Infinite Archives’ Resists the Neat, Tidy, and Eurocentric

The Black Salt Collective reimagines the documentation of various cultures' histories with its dynamic exhibition.

Interdisciplinary artist Sarah Biscarra Dilley’s family are descendants of the Chumash people, a Native-American tribe that once populated Southern California’s coast near modern-day Santa Barbara. The Spanish invasion decimated the Chumash population, and the last native speaker of its last surviving language, Smuwic, died in 1965. For Biscarra Dilley, learning about her people’s culture and native tongue took digging. She discovered information about her family tree through anthropological archives, referring to her great-grandmother’s stories to navigate her research.

“[Archives are] kind of how our representation as people of color in any sort of canon has been allowed to be present,” she said in a recent interview. “It’s this kind of fixed, outsider read on our communities.”

Given that Western anthropology was once inextricably tied to colonialism, ethnographic archives have long been a tool for constructing the concept of the cultural and racial “other” from a white, Eurocentric point of view. This concept is something the Black Salt Collective — of which Biscarra Dilley is a member — brilliantly subverts with its exhibition, Visions into Infinite Archives. The show features the work of Biscarra Dilley and fellow Black Salt artists Grace Rosario Perkins, Anna Luisa Petrisko (aka Jeepneys), and Adee Roberson, as well as dozens of other interdisciplinary artists of color from different parts of the country — particularly those with indigenous, Black, and Latino backgrounds.

The works in Infinite Archives are rooted in cultural history, but are also very contemporary. The artists put elements of their ancestry in dialogue with their lived experiences through inventive juxtapositions, many offering visions of utopian futures.

The exhibit also playfully embraces qualities that might conventionally be negatively perceived. Many of its works are made from ephemeral materials (resisting the archive altogether), while others incorporate crafting techniques, such as weaving and quilting, which the fine art world has traditionally rejected. There’s evidence of glue and tape marks in Biscarra Dilley’s collages of fragmented desert landscapes. And there are uneven stitches and messy, feverish scrawl in Natalie Ball’s quilt piece, “Incident at Fort Klamath,” which takes inspiration from the last armed resistance of the Modoc people of Northern California and Southern Oregon in the 1870s. Jeepneys created a large-scale, neon sculptural installation in collaboration with some times, incorporating video of one of her previous performances that examined Filipino culture and servitude, despite the fact that she had initially deemed the performance unsuccessful. The piece is one of the most commanding in the show, and its element of self-reflection adds layers of meaning.

Rather than presenting the work tidily, Infinite Archives is boisterous and loud. Its intention, Biscarra Dilley said, is to reimagine the archive as a “living, breathing” entity that adapts according to people’s lived experiences and celebrates diverse communities’ resilience. “We’re trying to shift that narrative by engaging an idea of an archive that is limitless and is born of our communities and ourselves, and is always changing.”

Correction: A previous version of this story neglected to state that Jeepneys’s sculptural installation is a collaboration with some times.