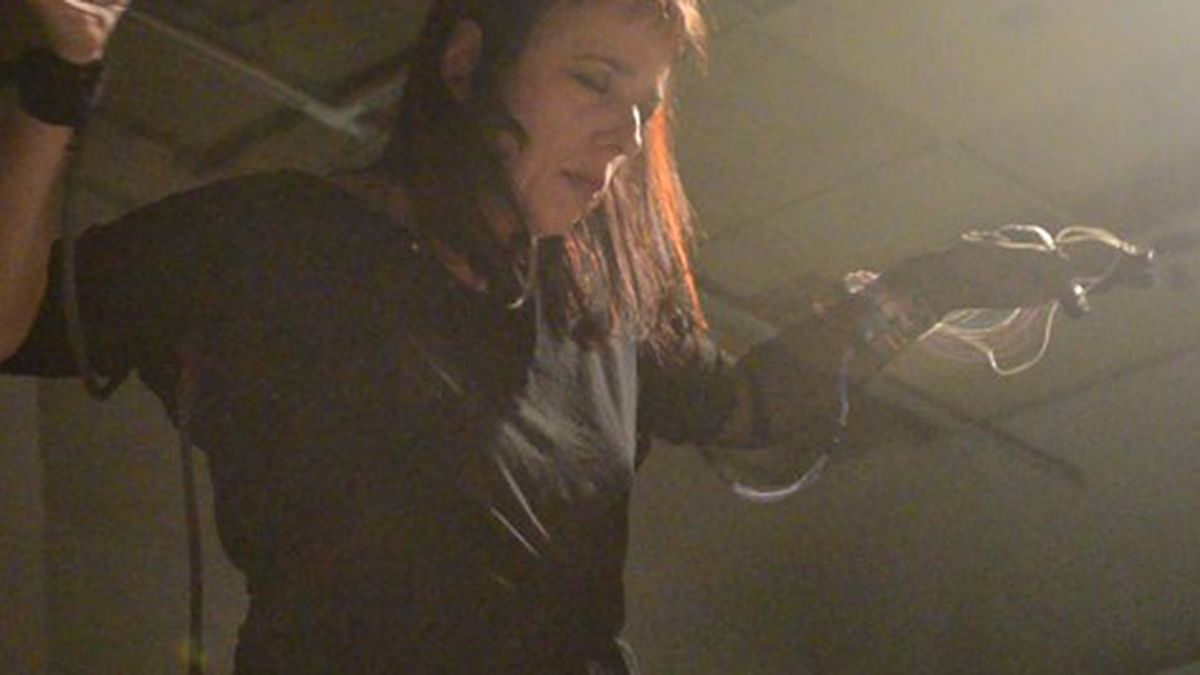 Viewing the Sound of Laetitia Sonami

A new documentary captures the work of the Oakland sound artist, whose music has rarely been recorded.

Oakland sound artist Laetitia Sonami didn’t believe in recording her compositions or live performances — despite the fact that it prevented her from gaining a larger audience for her work — until 2010, when she casually agreed to be filmed by one of her former San Francisco Art Institute students. She had no idea at the time that her ex-student, Renetta Sitoy, would end up documenting one of the most challenging periods in Sonami’s thirty-plus-year career, during which she found herself starting over.

“It started as a small project — then she just stuck with it,” Sonami said, sitting surrounded by wires, sensors, and small electronics in her Maxwell Park home/studio. “I might not have accepted had I known it was a documentary.”

Sitoy didn’t put the camera down for three years — going into debt to finish the feature-length documentary, which contains never-before-seen footage of Sonami’s performances and chronicles her creative process and even a trip back to her hometown of Paris. The Ear Goes to the Sound: The Work of Laetitia Sonami will premiere on Saturday, August 24 at College Avenue Presbyterian Church in Oakland.

Sonami said she never thought she’d be the subject of a documentary: “I feel like I’ve been around interesting artists. I know what interesting is. It’s not the idea I have of myself. I didn’t want it to happen because I thought it was not worth it.”

But Sonami is incredibly interesting, enigmatic, and inspiring. Her music — electronic in form, but often edging into abstract, noise-y territory — is performance art. For twenty years, her primary instrument was the Lady’s Glove, a bionic glove wired with sensors that send signals to synthesizers, lights, and other electronics; as Sonami moves the glove — clenching her first, making swooping movements, twitching her fingers — sound flies from her body and out of the speakers in a rush of kinetic energy. But three years ago, she decided to retire the glove and find a new instrument. It was the exact same time that Sitoy started filming the documentary.

Sonami had originally wanted to be a visual artist; she left Paris at age seventeen to study at the School of the Museum of Fine Arts in Boston. After she discovered a synthesizer in the basement of the school, she completely changed direction: “I had to choose one and sound was the most unknown.” She returned to Paris to work with her mentor, Éliane Radigue, one of the few female French electronic composers at the time, who encouraged Sonami to study at Mills College. At Mills’ Center for Contemporary Music — where Sonami currently works as an adjunct instructor — she began performing with handmade instruments, tape players, and spoken word. She frequently collaborated with her Mills MFA colleague Melody Sumner-Carnahan, who provided texts for her compositions.

By the late Eighties, Sonami had started composing on a Mac, but didn’t like how it detached her from an audience in live shows.

“I can’t sit at a computer and type,” Sonami recalled. “I wanted it to be about performance. I started to use the body to control sound.”

Sonami built the first version of the Lady’s Glove in 1991; she now describes its genesis as “somewhat of a joke, a response to the heavy masculine apparel used in virtual reality systems.” Using a pair of rubber kitchen gloves, Sonami glued sensors to the tips of the fingers on the left glove and a magnet to the right; when the sensors touched the magnet, the varying voltages converted to MIDI signals, which controlled various synthesizers and samplers. She built two more versions before an engineer at the Studio for Electro-Instrumental Music in Amsterdam designed a more sophisticated, reliable model.

By the mid-Nineties, Sonami performed around the world about fifteen times a year. But eventually, she decided she needed to move on: “With the glove, I knew I was really good at it — and I had to let go of it,” she said.

Audiences in the electronic music community knew her for the instrument, which made the transition difficult: “People expect something,” Sonami said. “I had people cry when I did the glove. Sound has this ability — not that it’s sad — but there are spaces in sound that open people up.”

The Ear Goes to the Sound features three different glove performances — including one filmed last year at San Francisco performance space The Lab, after Sonami had retired the instrument. It had been at least a year since she used it, Sitoy said, and that gave the performance an added layer of emotion: “It was literally one of the most incredible performances I had ever seen.” Somani said it was “like returning to an old friend.”

The film documents Sonami building and testing a new instrument called the Digital Spring Spyre, an electronic harp made of springs that took three years to create.

Sitoy also interviewed acclaimed composers John Bischoff and Maggi Payne, plus Radigue and Sumner-Carnahan, about Somani’s work. After the first screening, Sitoy plans to submit the documentary to the festival circuit. Somani said she’s at peace with any outcome.

“Women in the arts don’t get the recognition that they deserve,” Somani said. “It [the documentary] may encourage people to experiment and not worry about success.”