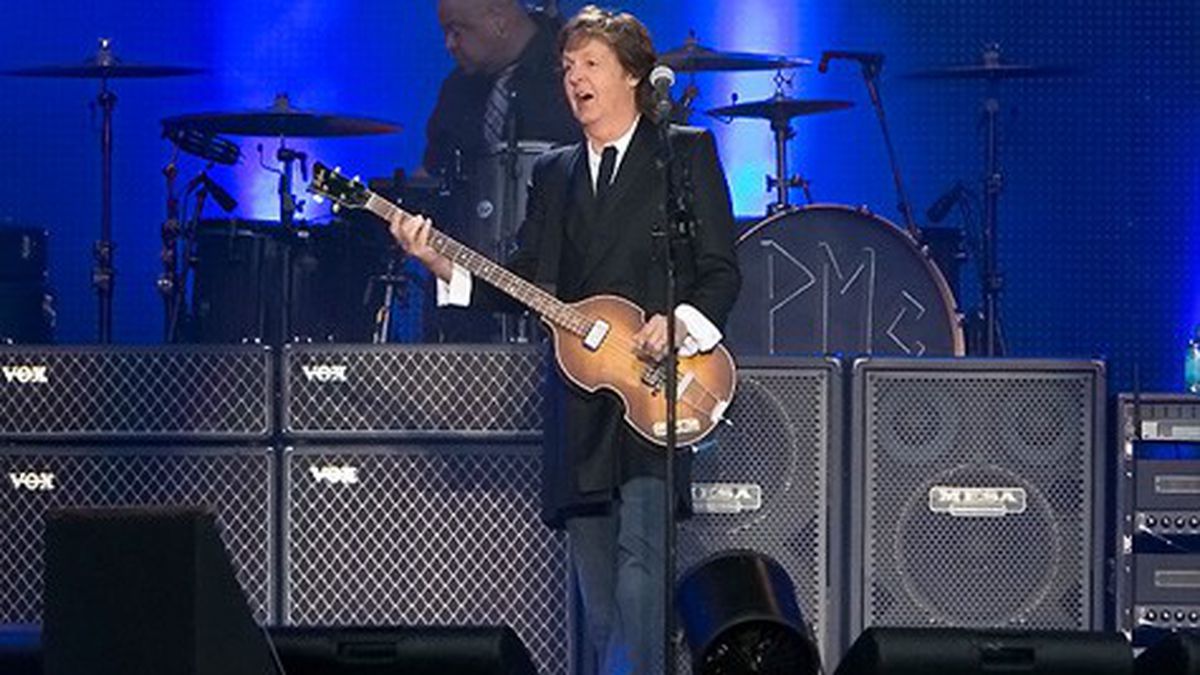 From comedy to a Paul McCartney sing-along, here's some highlights from Outside Lands 2013.

Last weekend I watched the actor John Stamos play congas with Willie Nelson. I told Boots Riley that I wanted to kidnap his baby (I’m not crazy; his son is ridiculously adorable). I high-fived comedian Rob Huebel. I drank moonshine and ate fried plantains and sang “Hey Jude” with tens of thousands of people — including Paul McCartney.

It was just another weekend at Outside Lands — that massive music festival in the foggy, dusty outer reaches of San Francisco’s Golden Gate Park. This year’s iteration was no less of a spectacle than years past — there were fireworks, shooting fireballs, epic light shows, and young people with little control of their faculties — but this year did feel particularly nostalgic thanks to bands like Nine Inch Nails, Red Hot Chili Peppers, and Hall & Oates. While some performances were a bit underwhelming (sorry, Jurassic 5), others (the aforementioned McCartney and Nelson) were so great that they made up for them and more. It’s notable that the most compelling acts were also the festival’s oldest, proving that youthful enthusiasm can’t easily usurp a good songwriter and years of experience.

But first, the comedy. I began my Friday in The Barbary, because any opportunity at Outside Lands to sit down on a clean surface without hordes of people crushing around you or the wind whipping your face should be taken — and also because last year’s comedy lineup (Reggie Watts! Michelle Buteau!) was really great. It turned out to be a wise decision, because I discovered Kate Berlant. Though she started off a little uncertain, she quickly settled into her routine, which entails hilarious, absurdist, pseudo-intellectual riffing that made me think she attended one too many lectures at a liberal arts college.

Eugene Mirman has performed at SF Sketchfest, so I was already familiar with much of his material. This time, however, he kinda stumbled through his storytelling. As for headliner Maria Bamford, she does a sort of stream-of-consciousness bit that reminds me of Watts, but in a shakier, more mentally unbalanced way. If you think jokes about cancer, killing pets, and mental illness are tasteless and inappropriate, then you should probably avoid her at all costs.

After that, I caught moments of The National, Wavves, and Yeasayer, but really, Friday was all about Sir Paul. I initially thought McCartney’s three-hour set was going to be overkill, but I was wrong; it turned out to be one of my top three concert experiences of all time, and I would’ve been happy if he had played all weekend. The constant barrage of hits — “Hey Jude,” “Blackbird,” “Lovely Rita,” “Back in the U.S.S.R.,” “Helter Skelter” — was a blatant reminder that you were in the presence of a living legend, and a very humble one at that. McCartney’s voice sounded excellent (even at age 71), and his band was top-notch. Fireworks and fireballs went off during “Live and Let Die,” but the theatrics weren’t necessary; tears streamed and people sang their hearts out and couldn’t believe they were experiencing it all together. Amazing.

Saturday’s performance featuring the reunited Jurassic 5 was apparently something I was supposed to be excited for, and yet I couldn’t help but feel blah about it. Granted, I am not someone who has a ton of memories associated with the hip-hop group, and judging from the crowd response, that put me in the minority. Still, the energy felt lukewarm.

A band whose energy never waned was Yeah Yeah Yeahs.Frontwoman Karen O lived up to her reputation as a charismatic performer: She jumped around in a sparkly, ruffly suit; spit water into the air; held her microphone in her mouth; and generally put the crowd in a party mood.

It was a tough act to follow, and while Nine Inch Nails did win points for its industrial light show, it did not come close to mustering the same kind of excitement — even while playing hits like “Closer” and “Head Like a Hole.”

By Sunday everyone was exhausted and dirty, but a decent crowd managed to make it out to see Kurt Vile & The Violators. Seeing the band live did make me appreciate Vile’s laid-back garage-y songs a bit more, but I can’t say that any of the melodies stuck in my head. Daryl Hall & John Oates played the hits and were enjoyed ironically by the young folks and unironically by the older ones. And regardless of what you think of Vampire Weekend’s watered-down Afropop-flavored music, it was apparent the band members are quite talented players.

It felt like everyone over the age of thirty at the festival was at the Sutro Stage to get a glimpse of country music legend Willie Nelson. As a fan waved a Texas flag over the crowd, Nelson and his band (including his two sons) played a lot of hits, including “Mammas Don’t Let Your Babies Grow Up to Be Cowboys” and some Hank Williams classics. Perhaps most impressive was that Nelson played lead guitar (his famed “Trigger”), which was high in the mix. When so many veteran musicians are content to sit back and let the younger hired guns do all the work, Nelson proved he’s still as relevant at age eighty as he was fifty years ago. Actor John Stamos (Uncle Jesse on Full House) spent much of the set on the sidelines taking photos on his phone and generally looking dapper, but eventually joined the band on congas (yes, congas). Bob Weir made an appearance as well to help sing “Roll Me Up and Smoke Me When I Die.” It was a true San Francisco moment.

While I’d like to say that I saw Matt & Kim and King Tuff and a bunch of other bands I had every intention of seeing, navigating Outside Lands was no easy feat. The weekend was completely sold out, and while paths between stages have improved over the years, getting from one end of the park to the other was still a fifteen- or twenty-minute commitment to severe claustrophobia, which after doing once I decided I didn’t want to do again. (Does that make me a bad person? Probably.) Red Hot Chili Peppers ended the festival by going to “Higher Ground” and the “Otherside,” although nostalgia did not seem to be a requirement to appreciate the set.

Considering the festival drew 65,000 people each day, the event was well organized and enjoyable: The crowd was not terribly obnoxious (although, according to one crew member, cleanup yielded needles, condoms, and cash), and the entertainment was plentiful and diverse. While I did not discover a New Favorite Band, I did get to see several legendary performers who I probably would never have seen otherwise. If you have a chance to do the same, I highly recommend it.