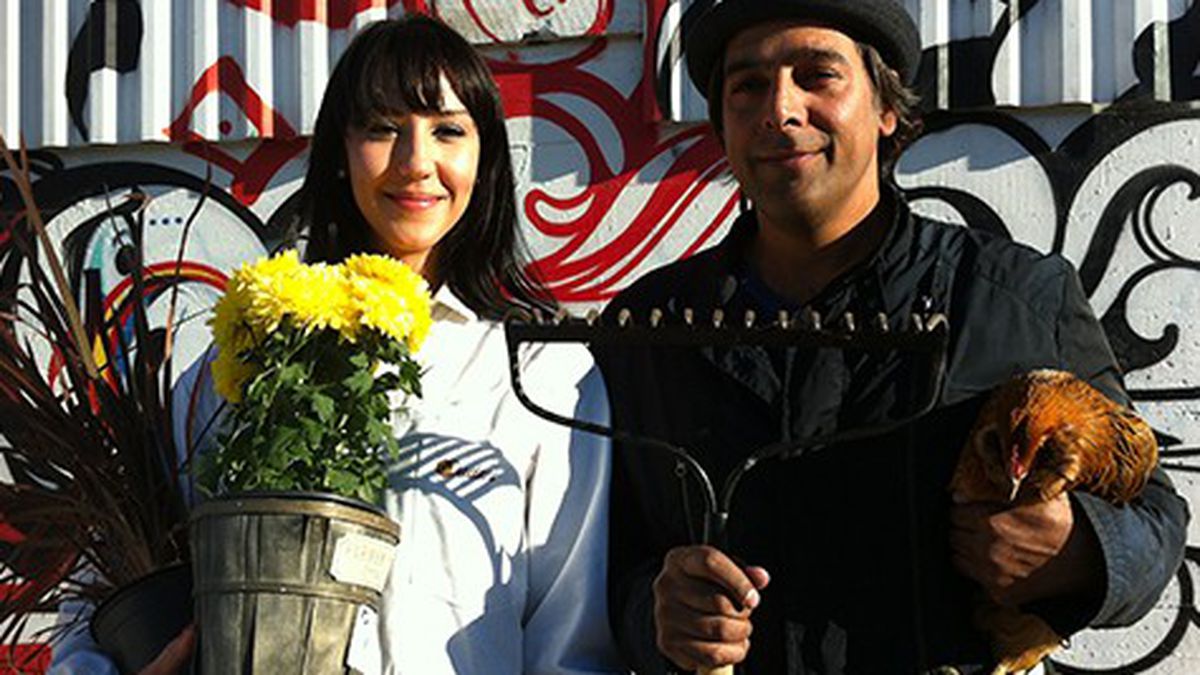 If you have any doubt that urban homesteading is hot in Oakland, then take a quick survey of all the DIY workshops and retail stores dedicated to the arts of beekeeping, raising backyard chickens, preserving foods, and other permutations of what I think of as “advanced” gardening. These days, it seems as if every sustainability-minded urbanite fancies him or herself a farmer.

Now, the topic is going to be the focus of a new web series from the producers behind such well known educational programs as Bill Nye the Science Guy and Biz Kid$ (a PBS show that teaches pre-teens about entrepreneurship). Fresh off a successful crowdfunding campaign, The Urban Homesteader is tentatively slated to debut its first episodes in October 2015, with the eventual goal of becoming a full-fledged PBS television series. The show will be set — where else? — in Oakland.

The Urban Homesteader is the brainchild of co-producer Jeannine Glista, the Biz Kid$ executive producer, who has dabbled in raising chickens, pigs, and bees at her home in Nevada City. Given the public’s current fascination with the DIY food movement, she felt the time was ripe for a show on the topic — and what better place to film it than in a city whose distinct urbanity (“It has the best graffiti walls!” Glista gushed during our phone interview) and proximity to so many companies involved in the aforementioned movement made it an ideal fit.

The goal, Glista said, wouldn’t be for the show to “take over” the urban homesteading space, but rather to celebrate all the interconnected grassroots movements — “to bring it so it becomes more mainstream.” In each episode, the show’s two co-hosts will visit an urban farming expert to learn about some topic — for instance, how to raise goats or smoke meat. Then, they would go home and try the concept out themselves.

According to Glista, the show’s target audience will be millennials who have moved to the city, to whom the sustainable DIY movement resonates. Each episode will be an “easy, bite-size chunk” meant to inspire viewers to go out and try something new. And while that kind of digestible snippet might not seem like the best way to achieve mastery of something as involved as, say, raising chickens, The Urban Homesteader isn’t really intended to make anyone an expert. For those who want to go deeper, phase two of the project will set up a network of local classes and workshops for interested viewers, Glista explained.

Of course, this is TV — or aspires to be eventually, anyway — so much of the series’ success will depend on how charismatic its stars are. Toward that end, Glista recruited Harvindar Singh to be one of the co-hosts. Singh is an Alameda resident who works as the “local forager” for Whole Foods Market Northern California. (Note that Whole Foods is one of the show’s corporate funders, along with the magazine Mother Earth News.) Singh’s day job sends him to obscure farms all over the state to identify new suppliers for everything from barley to olive oil. In an interview, Singh told me that he’s lost count of how many chicken farms he’s visited.

Given his background, Singh doesn’t quite fit the “everyman” profile that I imagined when I first watched the show’s four-minute promotional trailer — i.e., the bumbling city slicker with no clue about the most basic principles of farming. But Singh said he’s far from an expert on the topics that the show will likely cover. His hope is that the show will be a vehicle for ancestral knowledge — about, say, food preservation or animal husbandry — to be passed on to a mainstream audience. “We all used to be ‘urban homesteaders,’ but over the years we became addicted to the industrial food system,” he said.

The Urban Homesteader recently completed a $20,000 fundraising campaign to finance the first two webisodes. From there, Glista said, the hope is that the show will grab the attention of a potential full-fledged corporate sponsor. After all, the estimated budget to film thirteen full-length episodes for PBS is $1.5 million.

The Alameda County Environmental Health Department didn’t immediately respond to my request for clarification about the shutdowns. But when I called Cafe 88 and Gum Kuo this past Friday morning, both were open for business. That’s welcome news. Gum Kuo is my favorite late-night (and early-morning) jook spot, and Cafe 88 probably serves my favorite Cantonese-style roast pig in the city.

A search of the Alameda County inspection results database revealed that both restaurants, which are located next door to each other in the Pacific Renaissance Plaza, had been shut down because of the presence of vermin — never a word you want to hear associated with any restaurant. In any case, the May 20 re-inspection reports for both restaurants indicate that the problems have been resolved. Intrepid diners, use your own best judgment.

Correction: In the original version of this report, we misspelled Harvindar Singh’s first name.