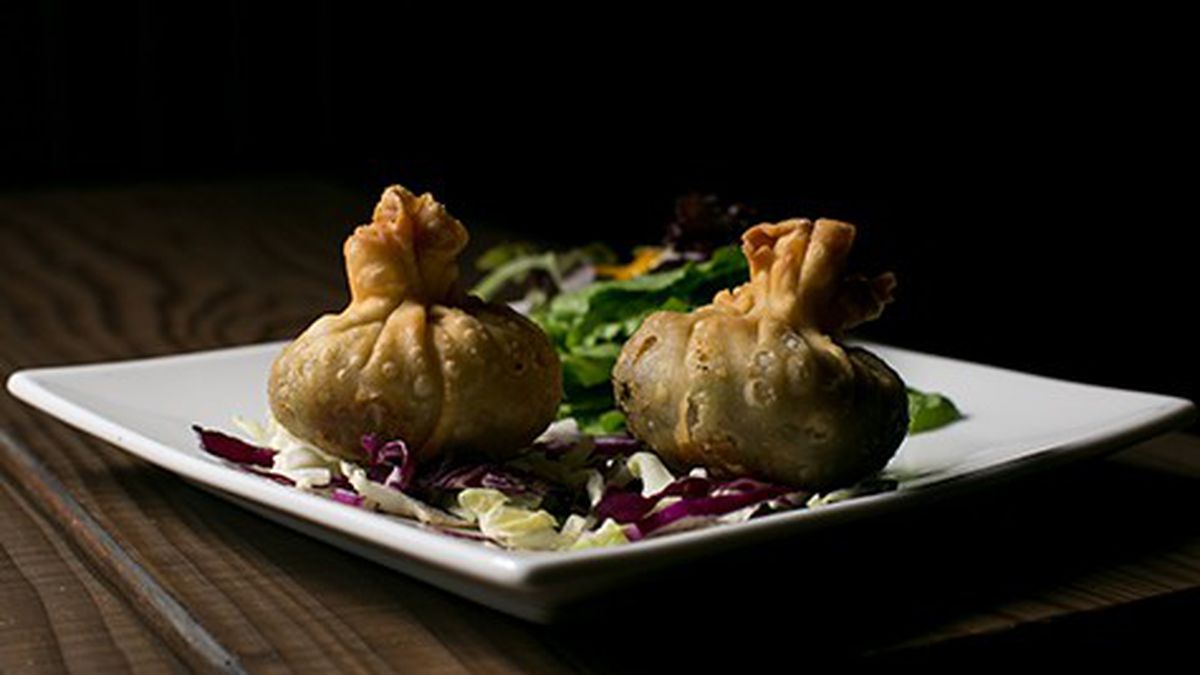 As much as every picky gourmand loves an elaborately plated, conscientiously sourced dining experience, those of us with busy jobs and short breaks are drawn in by another siren song: the quick, convenient, and reasonably tasty lunch.

Anchored by Picán and Plum (before the latter got swallowed up by its more casual sister restaurant, Plum Bar), Uptown Oakland’s restaurant scene seemed primed to go completely upscale — for a while anyway. That might still come to pass, but for the time being, the neighborhood has mostly evolved into a hub for moderately priced international cuisines. If you’re seeking affordable lunch fare, there is a slinger of West African meat skewers (Suya), a Taiwanese lunchbox joint (Taiwan Bento), a taqueria (La Bonita), and Bombay B’s, the curry house that is the subject of this review — all lined up practically in a row on Uptown’s main plaza. (Throw in the Ike’s sandwich spot, and it’s a wonder that the Subway around the corner has yet to kick the bucket.)

As for Bombay B’s, the restaurant is the third to open in the same spot in the last two years, following a series of short-lived wine bars and, most recently, a New American restaurant with a somewhat unfortunate name: Captain and Corset. For this project, Bhupender Singh, a well-regarded Indian chef, has teamed up with Sam Patel, one of the co-owners of the two previous aborted ventures in the space. The restaurant is Singh’s first foray in the Bay Area, but he owns several other Indian restaurants scattered around California, ranging from a fairly upscale white-tablecloth spot in Monterey to a pair of steam-table fast-food joints in Los Angeles.

Bombay B’s lies somewhere in between, with an eye toward the office lunch crowd. While the food is cooked fresh to order, the emphasis is on speed and convenience — just three to five minutes to crank out an order, Singh said.

As originally conceived, the restaurant was supposed to have a big focus on Indian street foods, ranging from fusion-y to Bombay-authentic: an array of curry-topped Indian “tacos” and naan “pizzas,” a veggie burger, and an Indian-spiced chapli burger. But during my visits, about a half-dozen items were taped over on the menu — casualties of a tiny kitchen that wasn’t equipped to handle the kind of large-scale grilling that those dishes would require. (Singh hopes to remodel the kitchen, installing, among other basics of Indian cookery, a tandoor oven, which would allow him to bake fresh bread on site.)

It’s a shame because the remnants of that section of the menu give a hint at the kind of fun, shareable (and booze-friendly!) food that would set Bombay B’s apart from the field of cookie-cutter curry houses.

Take the masala fries, a dish inspired by Singh’s childhood visits to his uncle’s home in Bombay. On the corner, Singh recalled, there was a street cart that sold what the customers who lined up to buy them had dubbed “poor man’s fries” — fries tossed in homemade hot sauce. The version Singh has recreated at Bombay B’s features thick-cut steak fries coated in a sticky, spicy-sweet glaze that reminded me, somehow, of Korean fried chicken. What was remarkable was how well balanced the flavors were, and how crispy the fries stayed, despite being doused in all that sauce.

Elsewhere on the appetizer front, the purse-shaped beef samosas, despite being a touch greasy, were among the best I’ve had of the thick-wrappered style — each plump, deep-fried sachet stuffed generously with surprisingly juicy, cumin-tinged ground beef. On the other hand, I wasn’t crazy about the kale pakoras, which, for all their quaint California wholesomeness (as far as deep-fried fritters go), were too dense and starchy to be enjoyable, even when dipped in the accompanying yogurt sauce.

To wash all of this spice-heavy fried food down, there’s plenty of cheap booze for those who choose to partake — Budweiser, Taj Mahal, and more $4 and $5 wines by the glass than I can recall seeing on an Oakland downtown-area beverage menu. Still, nothing on the list succeeded in steering me away from the mango lassi, a thick, not-too-sweet version of the classic blended yogurt drink.

For now, the bulk of Bombay B’s menu consists of a fairly standard array of curries, which customers can easily mix and match — either as part of a rice bowl, a combination plate (which comes with two small portions of curry and either rice or salad), or an a la carte entrée.

It’s when I started exploring this part of the menu that I wondered if the restaurant’s emphasis on speed is slightly misguided, if only in the sense that — with a few exceptions — I haven’t found the Bay Area’s other casual Indian restaurants to be particularly slow. And while Singh’s higher-end restaurants built much of their reputation on the intricate flavors of their curries, at Bombay B’s I found that these dishes were hit or miss. Perhaps a few more minutes and a little more attention to detail would make a difference.

That isn’t to say that there weren’t highlights. My favorites included the coconut milk-based fish curry — which featured tender pieces of basa fish and a tangy, gingery heat — and the lamb vindaloo, a classic, satisfyingly savory version of the Goan specialty whose only fault was that the lamb itself was dry and stringy. On the vegetarian side of the menu, the best dish was the malai kofta — a kind of dumpling that has a pleasantly mushy texture similar to Parisian gnocchi, or the dumplings you find in Southern chicken and dumplings, served in a fiery, bright-red, tomato-based gravy. (Traditionally made with cheese, these kofta had vegan-friendly shredded tofu as their base.)

The dishes are served “medium” by default, which I found to mean “not spicy in the least,” which would be fine — I’m not the kind of uncompromising chili-head who believes every Indian dish is meant to cause smoke to come out of my ears. The problem was, whenever we didn’t specifically request dishes to be spicy, they came out bland or, worse, way too sweet.

The otherwise exemplary — texture-wise, and so forth — palak paneer (spinach with house-made cheese) epitomized the former problem: It just didn’t have any flavor. The chicken tikka masala, always a crowd favorite, was a particularly flagrant example of the latter. The tomato-intensive sauce needed more cream and more spice; as it was served, I found it strangely reminiscent of Chef Boyardee. And the aloo gobi, the cauliflower-and-potato classic, was just wet and soggy, without any discernible spice.

I’m happy to report, however, that the lamb biryani was excellent — perfectly spiced (without us having to ask for it), with rice that had been cooked the traditional way: steamed inside the cooking vessel sealed with dough, to yield a delicate texture — something akin to Vietnamese broken rice.

I’m told that Bombay B’s is super busy during the peak lunch rush — but, despite the best efforts of the cheerful, multiethnic staff — business was slow enough during dinner to make the place feel slightly depressing. The room is dimly lit, and there was always a lone man (oddly, a different one during both visits) sitting in the back corner, doing some kind of paperwork. Lively Bollywood music videos projected on the back wall gave the feeling of a big party for which none of the guests showed up.

Still, the convenience and price point are awfully appealing, and the paucity of Indian restaurants in the downtown area makes Bombay B’s a welcome addition. At the end of the day, I’d rather have a restaurant like this — flawed but occasionally excellent, with potential to improve — than one that’s entirely run-of-the-mill.