In line with Japanese tradition, this Uptown spot keeps it casual. But how do the noodles stack up? 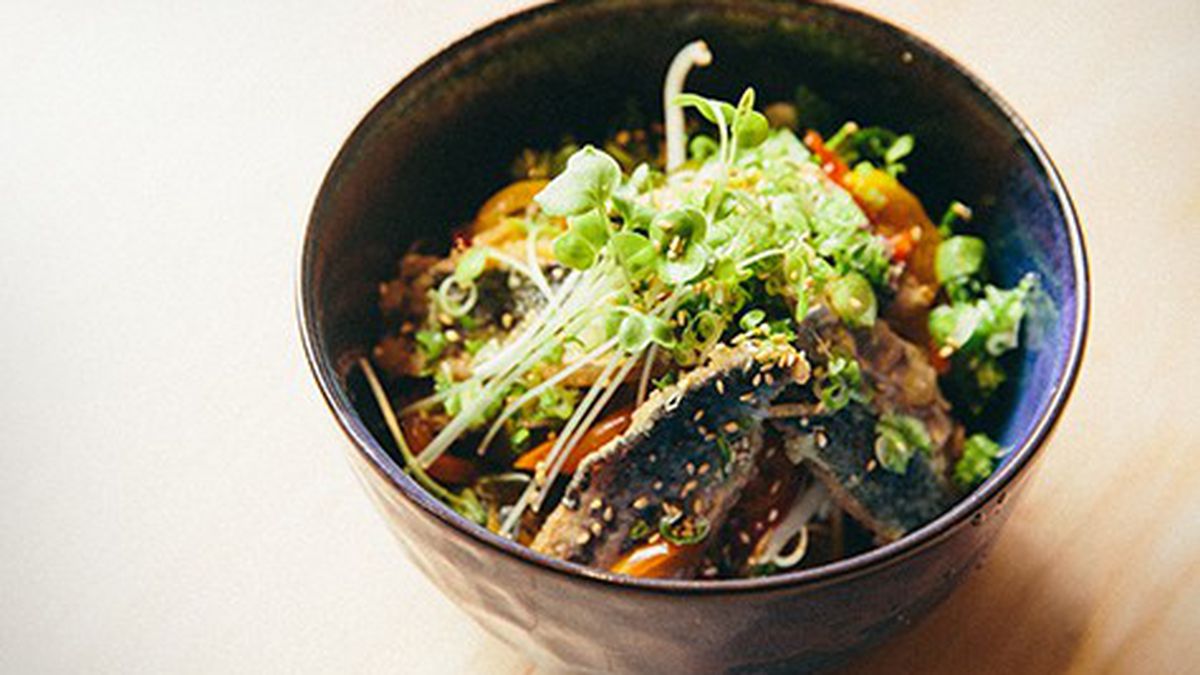 One of my favorite pop-ups from the past several years was an after-hours ramen night hosted by Hopscotch, Uptown Oakland’s upscale Cal-cuisine diner. Dubbed Yonsei Ramen (an allusion to chef Kyle Itani’s identity as a yonsei, or fourth-generation Japanese immigrant), the ad hoc noodle shop had all the qualities I look for in a pop-up dining experience. The crowd was diverse and hyped up. The music — all vintage Nineties hip-hop — was unapologetically loud. The beer was served in plastic cups. Nothing felt overly curated, like everything had to be pre-approved by a PR manager. And, most importantly, the ramen was some of the best I’d eaten in Oakland.

So, I was eager to see how that casual, impromptu approach to ramen would translate at Itani Ramen, the chef’s new eponymous, stand-alone ramen shop, which opened in May.

As Itani tells it, Yonsei Ramen’s brief, glorious run was the result of the perfect confluence of factors. Hopscotch was still in its early stages, and Itani was looking for a way to scrape together an extra $1,000 a week just so he’d be able to cover payroll. He conceived of the ramen pop-up as a way to use up ingredients that Hopscotch already had on hand — a slew of pork and chicken bones, most notably — which led to some of the fun, improvised feel.

Located a few blocks away from Hopscotch, Itani Ramen doesn’t have the luxury of being a side gig that doesn’t have its own rent to pay. So, the prices are a bit higher than they were at the pop-up, and the vibe isn’t quite as loose and fun. But it’s still a casual, approachable ramen restaurant, with order-at-the-counter service and dessert served from a vending machine. And much of the food is flat-out tasty.

For instance, the ramen dishes feature some A+ building blocks: The chashu, or slow-braised pork belly, that tops one of the restaurant’s five standard ramen dishes (and is available at an add-on to any of the others) is as luxuriously soft and unctuous as you could hope. And the marinated soft-boiled egg — the other classic ramen topping — is also best-in-class: a bright orange yolk that perfectly straddles the line between being runny and spoonably creamy.

But the restaurant needs to do some work on its two most important components: the noodles and the broth.

All four of the ramen dishes I tried were solid enough, but none had the addictive, deeply soulful broths I associate with the best examples of the genre. The soy sauce and chicken-based shoyu broth was light and clear-tasting, but was missing some extra jolt of savoriness to really make it pop. Adding the optional spicy miso sauce helped a bit: Since the featured protein was ground chicken, the overall effect was that of a lightweight tantanmen. Meanwhile, Itani’s vegan ramen broth — made with a stock heavy on cabbage and shiitake mushrooms, with a drizzle of black garlic oil — was mild to the point of blandness. It paled in comparison to, say, Ramen Shop’s Meyer lemon ramen broth or Shiba Ramen’s soy milk-based vegan ramen.

There’s no tonkotsu ramen on the menu, despite the dish’s stranglehold on the Bay Area ramen scene, mainly because Itani doesn’t care for the very heavy, fat-intensive soup that’s characteristic of that style. But if that’s the kind of ramen you like, Itani’s salt- and pork-based shio ramen is the one to get. It’s also the best of the hot ramen dishes: creamy, rich, and satisfying, though I longed for some complementary flavor — sweetness, acidity, or spice — to add another dimension.

My favorite ramen dish, the nanban zuke, was actually more of a “ramen salad.” Instead of hot soup, the noodles were served cold — preserved at their state of maximum springiness — in a bracing rice-vinegar dressing, then topped with pickled sardines and an assortment of delightfully crunchy raw vegetables.

About those noodles: Itani acknowledged that they’ve been his biggest challenge, due in part to a steep learning curve created by using an Italian pasta machine to make Japanese ramen. Apart from in the one cold dish, all of the noodles I ate at Itani Ramen were on the soft side — in one case unpleasantly so.

The restaurant’s saving grace? Everything on the menu apart from the ramen was delicious. Appetizer highlights included crispy thin-sliced pig ears that were dusted in a house-made shichimi spice mix and served with a wedge of lime — like a Japanese take on Mexican chicharrones — and some of the best potstickers in town. (Get them “sloppy” style, which means deep-fried and topped with bonito flakes and Kewpie mayonnaise, like okonomiyaki.)

There’s also a section of the menu dedicated to donburi, or rice bowls. The showstopper is the “Egg 3 Way,” with its briny, decadent, umami-laden trio of uni, ikura (cured salmon eggs), and soft-boiled egg, served with toasted seaweed so you can make your own improvised handrolls. But my favorite was the budget-priced negi chashu donburi, which makes good use of all the kitchen’s extra pork belly scraps. It’s the perfect thing to order at the end of your meal to top yourself off if you’re still hungry.

Japanese food culture is famous for the way it encourages a kind of one-minded devotion — the classic trope of the cook who labors in obscurity for thirty or forty years to master a single dish. Itani, too, subscribes to that theory of continuous improvement. In fact, he said that’s one of the main reasons he wanted to open a ramen shop and take on the challenge of making the noodles from scratch — a tall order, especially given how good the ubiquitous Sun brand noodles that most of the prominent Bay Area ramen shops use are. It’s worth noting that neither Itani nor chef Brian Ikenoyama (official title: “Ramen Slinger”) had formal experience with ramen prior to opening this restaurant — Itani’s short-lived pop-up series notwithstanding.

As Itani put it, “It’s not, ‘Hey guys, I’m an expert on ramen; come check it out.’ It’s more just a place where people can come nerd out on ramen.”

That said, it’s fair to note that Hopscotch’s success has made Itani one of Oakland’s most highly regarded chefs and that, as a result, Itani Ramen received several helpings of food-media hype in the run-up to its opening. You can’t blame customers for having high expectations. But the truth is that if it weren’t for how good all of the non-ramen dishes were, my meals at Itani Ramen would have to be classified as a mild disappointment. I never found that one moment of serendipitous slurping — when noodles, toppings, and broth all come together just so.

Even at its current level, Itani Ramen is a pretty good ramen shop. But there’s potential for it to be great. What I appreciate is Itani’s invocation of that very Japanese type of work ethic — the idea that both the noodles and the broth are things that ought to be perfected over time, and that each batch should be just a little bit better than the last. Just last week (subsequent to my review visits, unfortunately), Itani switched to a new kind of flour that he believes gives his noodles the springy chew that they’d been missing.

Even more intriguingly, Itani plans to launch a monthly “prefectural ramen” special as an antidote to the average American diner’s ignorance about the regionality of Japanese cuisine — “Oh, so you make sushi” being the typical response when people find out he cooks Japanese food. For his first ramen special, Itani plans to create a ramen dish that highlights Akita prefecture, which is known for its chicken, its cold-water seafood, and a kind of rice cake known as kiritanpo.

I don’t know what that ramen will taste like. But that spirit — that idea that ramen is something fun that none of us know as much about as we’d like to think we do? That’s something I can get behind.