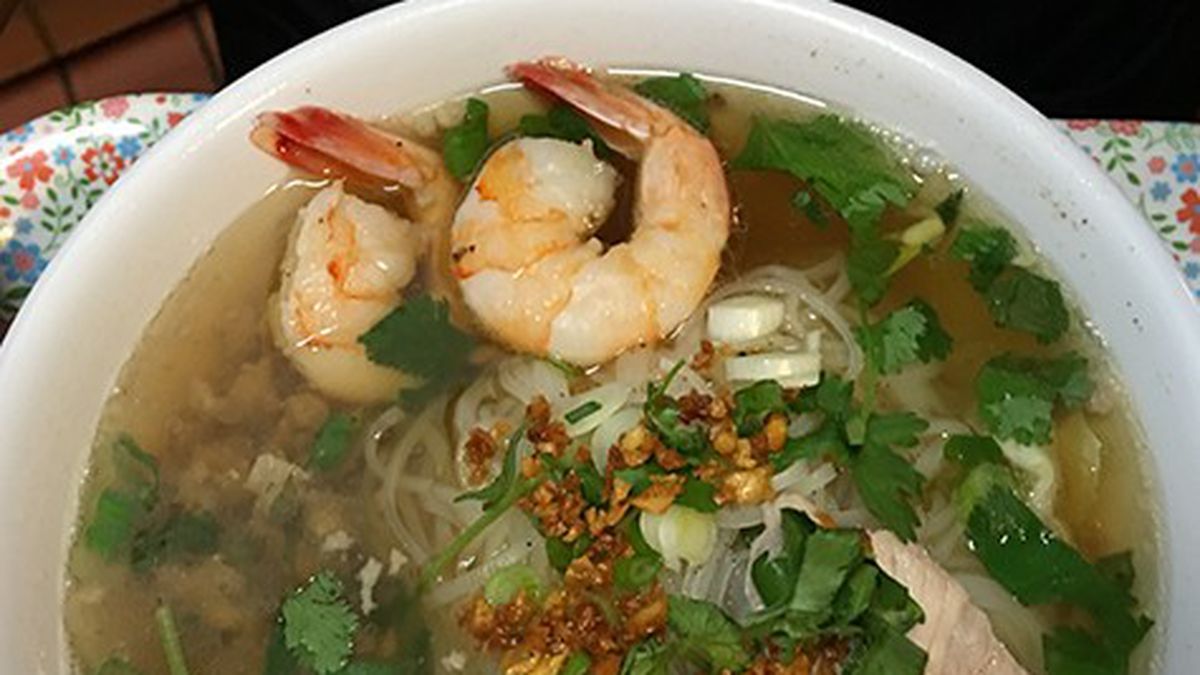 Nyum Bai, and Have a Doughnut

Nite Yun was tired of Americans associating Cambodia with only two things — the temples of Angkor Wat and the Khmer Rouge genocide. The sacred and the profane, and nothing in between.

Why didn’t anyone ever talk about Cambodia’s legendary psychedelic rock scene, which had its glorious heyday in the Sixties? Why did so few people, even here in the food-obsessed Bay Area, know anything the country’s delicious cuisine?

So, earlier this year, Yun — the daughter of Cambodian refugees who moved to California in the early Eighties — started a pop-up dinner series in San Francisco as a way to highlight the food and culture of her ancestral homeland. She named the pop-up Nyum Bai, or “eat rice” — the simple phrase her mother would repeat constantly whenever Yun had friends over when she was growing up.

On Friday, June 17, from 5–9 p.m., the West Oakland resident will bring Nyum Bai to this side of the bay for the first time. This iteration of the pop-up will focus on Cambodian noodle dishes — she dubbed the event “Noodle-Maple-Social” — and will be hosted by Temescal’s Golden Gate Donuts (4201 Telegraph Ave., Oakland).

The decision to hold the pop-up in a doughnut shop was no coincidence: Doughnut shops are a big part of the Cambodian diasporic story, as large numbers of refugee families who arrived in Southern California during the Eighties wound up opening doughnut shops. In the way of so many immigrant communities, early adopters would loan money to later arrivals to help them open their own franchises. In that way, doughnut shops just became a Cambodian thing. To this day, the majority of independent doughnut shops in California — including Golden Gate Donuts — are Cambodian-owned. (I wrote about two of these shops in “As American as an Apple Fritter,” Dining Review, 4/6/2016.)

Yun’s family never ran a doughnut shop, but many of her friends and relatives did, and her mother worked in one for a time. So, it has always been a goal of hers to hold one of her pop-ups in a doughnut shop. The setting isn’t just for ambience either: Golden Gate Donuts owner Leng Ngauv will be on hand to sell doughnuts for dessert.

One of the main reasons Yun started her pop-up was because she had such a hard time finding a home-cooked Cambodian meal in the Bay Area. And the few Cambodian restaurants she encountered tended to serve so many Thai and Vietnamese dishes, it was no wonder that most American diners had no idea what exactly defined the cuisine. Mainly, Yun said, it’s characterized by the generous use of fresh ingredients — galangal, lemongrass, kaffir lime leaves, and so forth. There are simple salads where the vegetables and herbs are allowed to speak for themselves. Other dishes feature a kind of fermented fish paste called prahok, and assorted spice pastes known as kroeung. And chilies and coconut milk are used much more sparingly than in, say, Thai cooking, Yun explained.

But for Friday’s pop-up, noodle dishes will be the star of the show — particularly, the kinds of noodle dishes that are popular street foods in Cambodia. Yun said her best dish is her kuy teav, a rice-noodle soup that bears some outward resemblance to a Vietnamese pho or bun mam. Its base is a clear, rich pork broth, to which Yun adds dried shrimp and dried squid (for a jolt of umami funk), homemade chili sauce, crispy garlic, and slow-cooked pork shoulder.

Another likely menu item will be nom pachok, a dish that features fermented rice noodles in a kind of fish chowder. Yet another makes use of instant noodles (yes, you read that right) — taken right out of package, minus the seasoning packet, and stir-fried with a tamarind sauce and hot sauce, then topped with a fried egg.

Everything will be sold a la carte for no more than $11 a dish.

Yun’s eventual goal? To open a Cambodian restaurant of her own — preferably a forty-foot diner somewhere in Oakland. Just as she will at the pop-up, she’ll serve her mom’s home-style recipes and play Sixties’ Cambodian rock, which combines elements of the Beach Boys and Frank Sinatra, she said: “It’s really funky and fun.”

Toughest Way to Spend a Day at the Lake