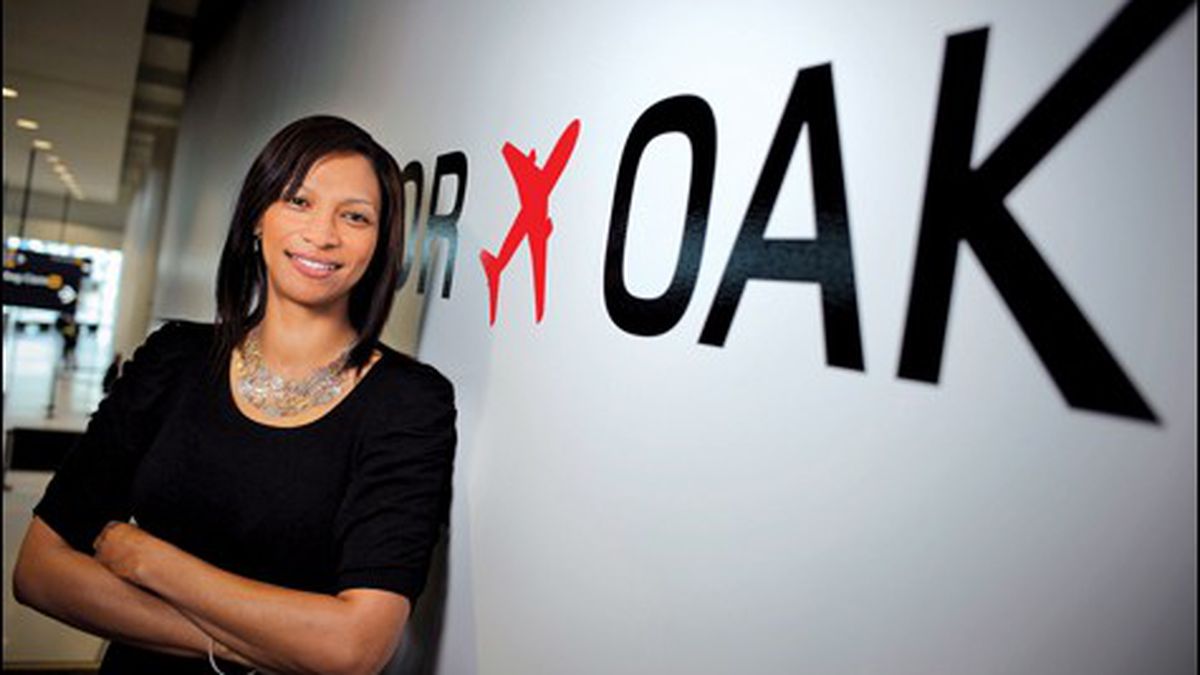 Up and Down With OAK

The airport lost about a third of its traffic in the recession. For the facility and its tenants, now comes the rebuilding.

Oakland International Airport may be the most visible small business in the city. Even as about 8,000 employees come and go from the huge airport property, only 242 of them are actually employed by the airport itself. The rest are airline employees (5,000 for Southwest Airlines and FedEx alone), security checkpoint personnel, coffeeshop baristas, and a wide variety of miscellaneous others. And while the airport might seem huge and monolithic, it’s really a relatively small quasi-public agency in an industry keenly sensitive to the ups and downs of the local travel economy. Over the past few years, it’s mostly been downs.

In fact, Oakland Airport lost nearly a third of its passengers — and several big-name airlines — during the recent economic downturn, slipping from nearly 15 million passengers to just 9.5 million in 2009. Some gates went empty when American Airlines and Continental Airlines left Oakland and others, such as ATA, went out of business. Also, Southwest Airlines and JetBlue shifted some of their flights to San Francisco International upon the arrival of Virgin America into SFO.

The downturn doesn’t affect just the airport; it’s also painful to the many smaller businesses that make their homes in Terminal 1 and Terminal 2. The timing was particularly bad for Chinatown’s venerable Silver Dragon restaurant, which opened an outpost at Oakland Airport in August 2009. Unfortunately, during the four years it took to get the Silver Dragon Cafe up and running, Terminal 1 went from a bustling warren of potentially hungry passengers and crews to a virtual ghost town during certain slow times of day, such as Tuesday afternoons. “It’s been a real struggle,” says Lilly Mar-Chee, owner and operator of the Silver Dragon Cafe. “The decline of air service and reduction of flights has negatively impacted our business.”

But airport officials remain cautiously upbeat, pointing to a slow but steady increase in the number of passengers — the total was up 7 percent this January over January 2009. And they note the reconstruction of Terminal 2, which brought some interesting new food options such as Andale, Max’s Deli, and Fenton’s Creamery. They’re just getting started on a similar revamp of Terminal 1. “There is still a lot of interest in doing business at the airport,” says Deborah Ale Flint, newly appointed director of aviation. “New air carriers have started, new routes have been added,” along with larger aircraft, she said. “This is going to be a strong industry for many years to come.”

The airport is part of the Port of Oakland, officially a department of the City of Oakland but in reality an independent entity that is expected to operate as a business. The downturn brought aviation operating revenue to the port down from $155 million in 2007 to $126 million the following two years. The port is projecting a steady rise back up to $132 million in 2010 and $143 million in 2011. During the downturn, the port reduced its staff by 75 positions through a combination of layoffs and early retirement.

Much of the airport’s income comes from fees airlines pay to use the facilities, though management can’t lean too heavily on its most important customers just as they’re trying to convince them to add more flights and bigger planes. And because the airport also earns a facilities fee off of every passenger, airport marketing efforts also are aimed at the care and feeding of some of the large corporations that send a lot of business travelers through Oakland, such as Pixar, whose employees use the Oakland-to-Burbank shuttles many times a day.

Concessionaires also are an important constituency, particularly the East Bay businesses that were invited to give the airport a more local flavor.

Mar-Chee is frustrated by the poor business climate she’s now stuck in, and believes airport officials could do more to woo the airlines and to market the food purveyors so passengers can find them. “Our customers will go to the airport looking for us, but there is no way of finding signage, except for what we have implemented,” she complained. “The port is missing the mark on offering an exceptional customer experience — there is no information on the restaurants and good eats in the airport. You go to the web site and see nothing about the food. They have a lot of good restaurants there.”

Not all the small businesses that rely on the airport’s health are downbeat. Njambi Mungai opened her first See’s Candies cart in 1996 as part of an airport program that trained disadvantaged locals to become small business people. Her business expanded to four See’s sites in the airport during the good times, and then scaled back down to two. She also started up an Auntie Anne’s pretzel stand.

Mungai is philosophical about the ups and downs of airport entrepreneurship. “It has been an excellent training ground for me and my company,” she said. “It’s easy to operate in a thriving, flourishing environment, but that is not the case when sales are down. We’re trying to run lean and mean. Somehow we’re staying ahead of it.” Mungai acknowledges, too, that having a strong brand name like See’s is an advantage.

Both business owners note there are pros and cons of operating a small business in an airport. The positive is having a captive audience of travelers who have come early to get through security and have extra time to shop for chocolate or wine. The negative, they say, is the high cost of labor — they comply with a living wage law and deal with various unions — and must staff their shops from 4 a.m. to 9 p.m. every day of the year. It’s also more time consuming to get supplies in and out of the building with security restrictions, Mar-Chee said.

There are a small number of independent small businesses in the airport, including Silver Dragon and Andale, but about 80 percent of the storefronts are managed through an exclusive contract with HMSHost, a huge international food and retail purveyor specializing in airports. Host licenses the names and business models of both national restaurants such as California Pizza Kitchen and Starbucks and local ones such as Max’s Deli. HMSHost doesn’t release sales figures, but spokeswoman Susan Goyett acknowledged the company’s concessions found it challenging to do business at Oakland Airport after the downturn. She is optimistic about a slow and steady recovery.

Airport marketing officials, meanwhile, are on the stump touting Oakland Airport’s strengths, such as the ease of getting in and out compared with their bigger rival across the bay. They point to Oakland’s 2009 ranking as the nation’s No. 1 on-time airport for arrivals. And they say their potential market base is actually larger than SFO’s; a majority of Bay Area residents live closer to Oakland airport (2.5 million people live in Alameda and Contra Costa counties, compared with 1.5 million in San Francisco and San Mateo counties).

The airport could regain a big chunk of the market share it lost to SFO in 2007 as the larger airport struggles with delays caused by fog and troublesome runway design, according to a study commissioned by the Metropolitan Transportation Commission in late 2009. That study foresees Oakland Airport potentially reaching its 33 percent market share again by 2035 (it dropped from 33 percent to 23 percent between 2006 and 2009).

That won’t be soon enough for Silver Dragon, which is starting its second year of a ten-year lease and looking for ways to cut costs to survive in the afternoon hours when Terminal 1 is quiet. Mar-Chen is hoping customers from the busier Terminal 2 will take the short walk over and seek out her food, which is all prepared fresh on site. Meanwhile, she’s helping another local business, Otaez Restaurant, navigate the unique world of airport concessions as it prepares to open at Oakland in May. “Based on what I’ve been through,” she said, “I like to support other small business owners doing the same thing.”