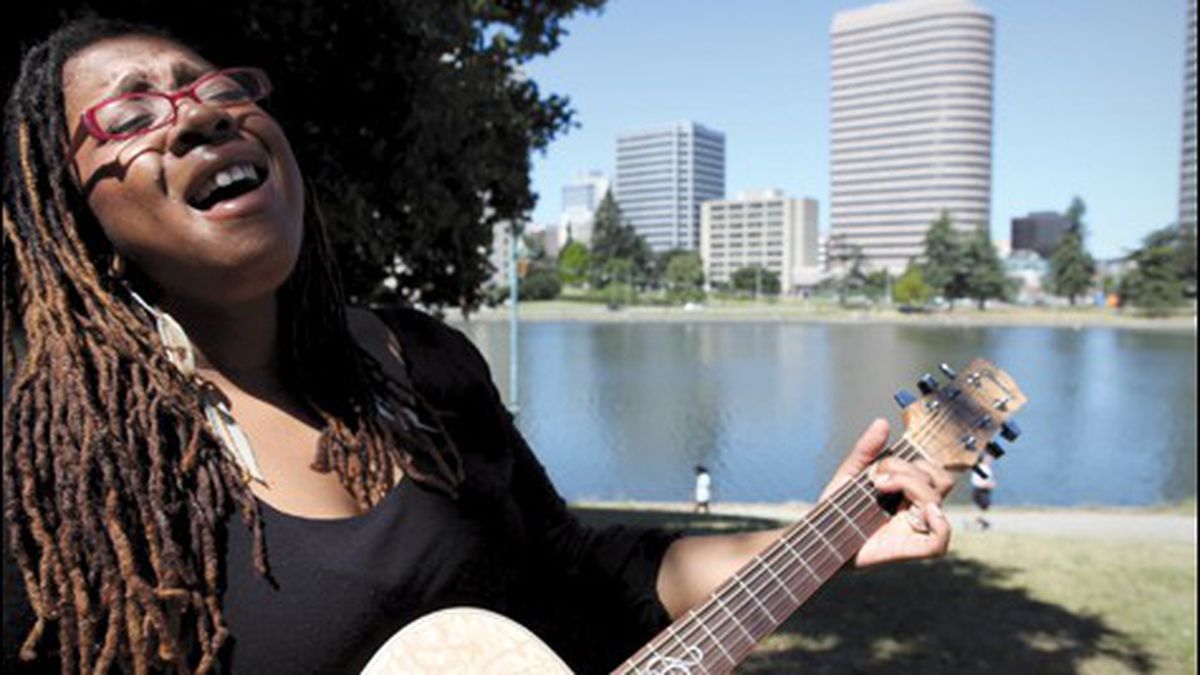 The ex-Broadway singer moves to Oakland and launches her solo career.

Crystal Monee Hall did everything in reverse. She landed a teaching job right out of college, but quit within the first month of school. Hall had gotten her Masters in Teaching at University of Virginia, expecting to either be a school marm or the next editor of Essence magazine. Instead, she went off to New York and joined the cast of Rent. After eight years on Broadway, Hall moved again, this time to the East Bay in the hope of furthering her career. She’s the first to admit that on the surface, it didn’t make much sense. All the tangible weight of the music industry lies on the East Coast, particularly if you’re trained in theater or cabaret.

But Hall didn’t want to croon “And I’m Telling You” or “Seasons of Love” for the rest of her life. She wanted to pick up a guitar, shake out her dreadlocks, and sing at jam sessions. And, so far, the move has paid off.

In hindsight, it shouldn’t surprise anyone that Hall became a folk singer. She honed her skills at Greensboro Baptist Church in Richmond, Virginia, singing three-part harmonies with her mother and brother. She grew up listening to all the soul and gospel royalty: The Clark Sisters, Odetta, Donny Hathaway, Aretha Franklin, The Pace Sisters, Tracy Chapman, Meshell Ndegeocello, anyone with the surname “Hawkins.” Hall gravitated to music with warm, full chords and tightly overlaid vocals. She liked for a singer to mean every word. She would eventually use her gospel upbringing for secular means, belting out songs about sex and seduction. “I’m religious and spiritual,” she said, “but now I emphasize the ‘spiritual’ over the ‘religious.'”

Hall launched her singing career on October 1, 2002, the day of her 23rd birthday. She’d just accepted a job teaching English and drama at a high school in Charlottesville. “It was cushy, it was cool, it was a new,” Hall said. “But I had to quit. … On my birthday I walked into the principal’s office and was like, ‘I’m sorry, I have to go. I really wanna sing.'” Within two months she moved to New York, began auditioning, and ultimately replaced Jennifer Hudson on a Disney cruise ship. “It was her last gig before American Idol,” Hall recalled. “She was very sweet. We haven’t talked since, but I imagine she’s still very sweet.”

Cruise-line gigs are a form of dues-paying for some musicians. You’re at sea for two-week stretches at a time. “We were coming to port two days a week, and we would get to go to Walmart,” said Hall. “We’d have to be back in the boat at three o’clock.” Cast members did full-scale productions of Hercules (based on the Disney film), Disney Dreams, and a new show called The Golden Mickeys (a spinoff of the Golden Globes). Hall wore a seven-pound wig and teetered around the stage in three-inch platform heels. She started dreading her hair on the advice of one of the ship stylists. “I had a really big fro at that time,” said the singer. “You know on cruise ships, they have the island women who braid hair and stuff. One of them had these beautiful locks. She was like, ‘You should just let me lock your hair, because I know that wig is hot.'”

Cavorting around a sea vessel in big heels and bigger hair helped prepare Hall for a four-year run with Rent. She started as a “swing,” or fill-in, and went on to play Joanne, the lover of bisexual performance artist Maureen Johnson. (Joanne sings “We’re Okay”). After Rent closed in 2008, Hall spent a year touring with fellow cabaret artist Spencer Day. She picked up guitar and started writing songs. They were earthier than the stuff she was singing on Broadway, and a bit closer — in spirit, at least — to the church music of her youth. Hall found that she wasn’t just a big-voiced belter. In person she’s surprisingly demure and careful with words. She wears sneakers and pink, trapezoidal glasses. She relies on other people to talk up her career.

“Most artists, they go to New York, and they want to land the best gig in the city, which is Broadway, and when you land one of the lead roles in Rent, you’re there,” said Hall’s current manager Ben Yonas, who also works with Jazz Mafia and DJ Amp Live. Yonas met Hall about three years ago at Bushwick Studios in Brooklyn. Hall was singing background for her friend Shayna Steele, who starred in the Broadway production of Hairspray. “In New York, there’s this circle of amazing vocalists who all have roles on Broadway,” said Yonas, explaining that Steele and Hall were close friends. He said he fell in love with Hall during the mic check. “She does this little harmony thing, where she sings ‘Hello, Hello, Hello.’ It was so in tune. It was so beautiful.”

It was partly at Yonas’ behest that Hall moved to the West Coast. But not completely. She came out here for the Fillmore Jazz Festival last summer, and relocated permanently in January. In November Hall recorded her new album, River Train, over a two-day session at Berkeley’s Fantasy Studios. Yonas commandeered the rhythm section: Scott Amendola on drums, John Evans on bass, Carl Wheeler on keys, and Errol Cooney on guitar. Hall wrote or co-wrote most songs on the album, save for her cover of Pat Benatar‘s “Heartbreaker” (her version is a lean blues). “Work Me Over” is a brittle love ballad sung over dry blues guitar. “Siren” is traditional roots-rock. The title track sounds like an old spiritual. Amendola plays a shaker. Hall sings in a style that recalls protest singers of the Sixties and Seventies: liquid, chillingly pure, full of vibrato without being ostentatious. She draws out all the long vowels and elides all the hard consonants. She vamps on the chorus, then allows the notes to evaporate. Her voice bristles, but she isn’t afraid of empty space.

On the East Coast, Hall was known as “one of those Broadway chicks.” Now she’s an indie artist muscling for gigs. She directs the choir every Sunday at Oakland’s Plymouth United Church of Christ, and sings with Jazz Mafia’s Brass, Bows, & Beats Hip-Hop Symphony. She performs at Cheeseboard Pizza, sings most Tuesday nights at the Chop Bar in Jack London Square, and occasionally graces small arts spaces in Oakland, where audience members drink tea from the bar and sit on folding chairs. For Hall, that’s not a regression. “I think the Bay will do really well by you,” she said over a croissant sandwich at Oakland’s Cafe Madrid. “In New York it’s so different, because it seems like there are all these boxes, she said. “Here are the girls of this particular type, you know what I’m saying? Here are the big-belter girls. You have Dorothies and you Evilenes. Out here people can be whatever you wanna be.”

Yonas likes that aura of rugged independence, even though he thinks that Hall undersells herself as a singer. Yes, she’s an ex-Broadway chick who chose to go it alone. But, Yonas said, she won’t be alone for long.

Crisis Is Our Brand

Jacket, Where Is Thy Sting?