Take this job and hang onto it. 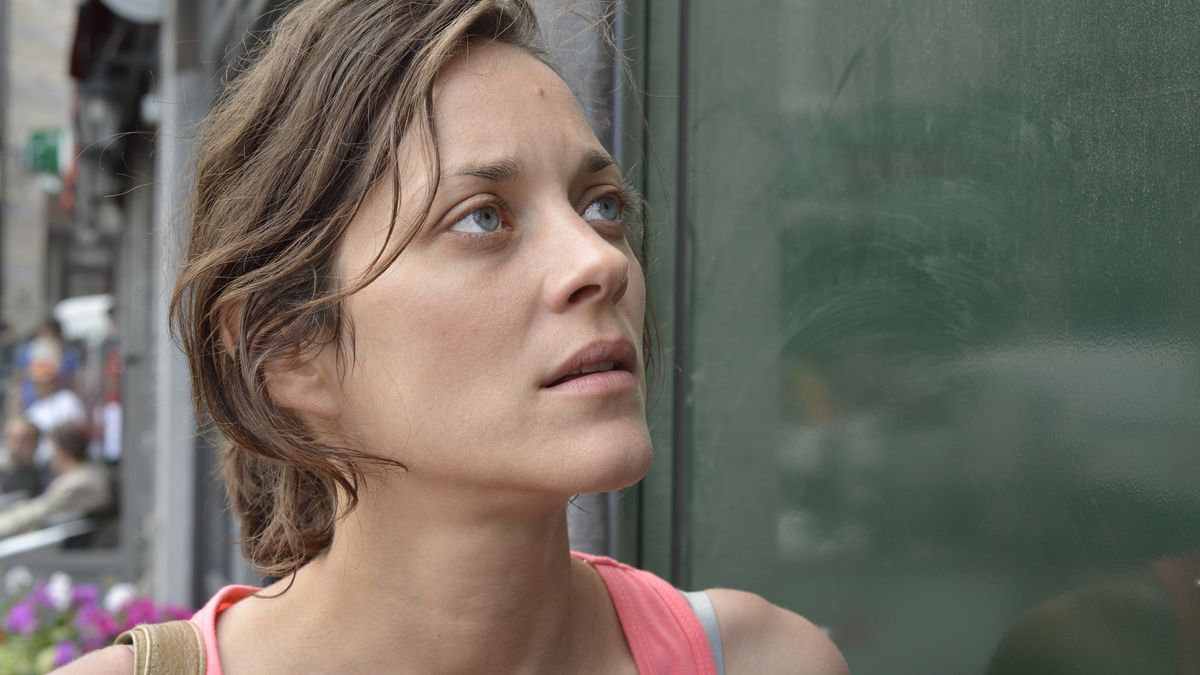 Sandra Bya is in a terrible bind. The married mother of two (played by Marion Cotillard) has just been notified by the owner of the small Belgian solar panel factory where she works that she is being laid off, effective immediately. Sandra hears that the boss is letting her go because, during the time she recently missed work on account of illness, he realized he could get the same job done with one fewer factory hand. Accordingly, he coerced the other employees into voting that Sandra would be the one dismissed, in exchange for a thousand-Euro bonus.

In the opening scenes of the Dardenne brothers’ Two Days, One Night, Sandra and her friend Juliette (Catherine Salée) convince the boss to allow a retake of the secret ballot. It is now Saturday morning. If Sandra can convince thirteen workers who voted against her to give up their bonuses and reinstate her on Monday morning, she can keep her job. She decides to visit each of the “no” voters and plead her case personally.

The filmmaking brothers Jean-Pierre and Luc Dardenne have fashioned an illustrious career telling the stories of hard-put working-class people like Sandra and her restaurant-employee husband Manu (Fabrizio Rongione). We accept it as a given that the factory boss is using the subterfuge of a “workers’ vote” to get rid of Sandra, presumably because she swallows large amounts of Xanax to get through the day and is thus unreliable. So it is the employees themselves, not the owner, who are “responsible” for sacking Sandra. She fits into the same general category as the Dardennes’ abused recent immigrant Lorna, the young unemployed parents in L’Enfant, and the abandoned schoolboy in The Kid with a Bike — superfluous people desperately making their way through the new Europe. Their struggles to make ends meet would be recognizable to many Americans as well.

As Sandra goes from door to door begging her work mates to do the right thing at their own cost, we might unconsciously play a little game, trying to guess from first glance which people will agree to act unselfishly, and which will not. Of course, each of them needs the extra money just as much as Sandra and Manu do, except that to save her they would only have to give up €1,000. All the while Sandra nervously skitters through the small town, popping pills and doggedly pursuing her only chance to earn a living. Appropriately, the song she hears on her car radio is Petula Clark’s French-language version of The Searchers’ “Needles and Pins” (“La Nuit N’en Finit Plus,” The Night Never Ends).

Actress Cotillard has portrayed a fascinating roster of complicated, compromised characters — the amputee accident victim in Rust and Bone, singer Edith Piaf in La Vie en Rose, a stressed-out summer vacationer in Little White Lies, the victimized title character of The Immigrant, etc. — but her Sandra Bya role is in a class by itself. At any moment we expect Sandra to fall apart at the seams. She’s obviously almost completely spent, physically and emotionally, yet she trundles on as if on remote control, her face haggard and etched with worry. If there’s any justice in the world, Cotillard will win a Best Actress Academy Award for her part (she was nominated earlier this month). Yet we somehow instinctively suspect, in common with the Dardennes, that justice is currently not available. Which is how Two Days, One Night packs so much power into its tense 95 minutes.

Previous ArticleGiving the Finger to Yelp

Next ArticleGiving the Finger to Yelp