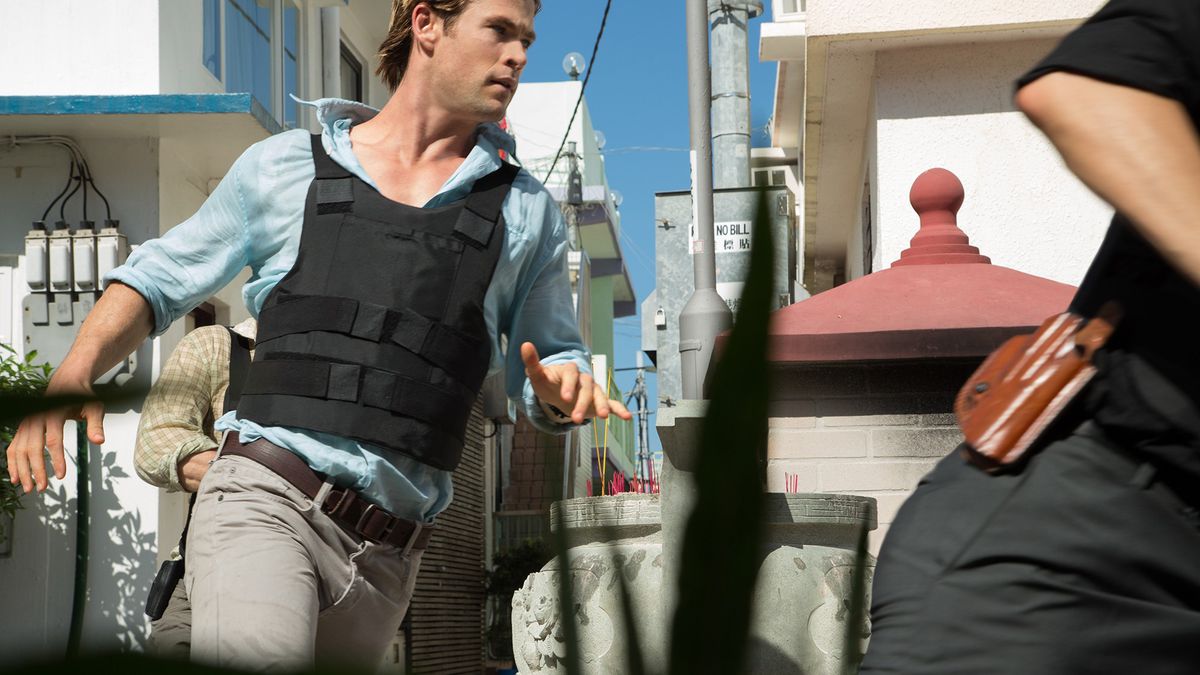 Even Michael Mann is capable of making an out-and-out clunker once in awhile. Mann, the veteran writer-producer-director of such trend-setting guns ’n’ glamour properties as Heat, The Insider, Collateral, Manhunter, and the original small-screen “MTV cops” series Miami Vice, usually has a knack for finding the niche between urbane topicality and violent fantasy. But his new project Blackhat, a globetrotting thriller about high-stakes cyber-crime, loses the combination. It has a locked-out, groping-for-relevance feeling, almost from its very first scene.

We’re supposed to believe that penitentiary convict Nicholas Hathaway (Chris Hemsworth, aka the muscular Thor) is actually a brilliant hacker. So brilliant, in fact, that People’s Liberation Army Capt. Chen Dawai (American actor Leehom Wang) comes all the way from Beijing to convince US security brass to spring Hathaway from stir in order to help them combat a nefarious cabal of computer criminals who have melted down a nuke power plant in China and hacked the Chicago commodities markets. How does Chen know Hathaway? They were formerly roommates at MIT. Of course.

Incredibly, to illustrate just how a hack works, Mann and screenwriter Morgan Davis Foehl employ the animated graphic device of “sending us” into a labyrinthine, whirring hard drive and following electronic impulses as they race through the cables and circuitry. Gee whiz, we haven’t seen that kind of approach since TRON, in which Jeff Bridges got shrunk and sent into a computer to battle the bad guys, back in 1982. Mann’s film kills quite a bit of time with this micro-exploring, so I guess it has its uses. But still.

Wouldn’t you know it, Capt. Chen has a beautiful sister, Lien (Chinese actress Wei Tang), who happens to be assisting her brother in combating the attacks of the high-tech bandido Blackhat (the chief bad guy, played by Dutch actor Yorick van Wageningen) and his RAT (Remote Access Tool). While we’re having fun learning all this cyber-jargon, the team of Hathaway, Lien, her brother, and a US security officer played by Viola Davis are busy jetting in and out of Los Angeles, Hong Kong, the Malacca Straits area of Malaysia, and Jakarta, on the trail of the greedy villain. Hathaway and Lien do all the usual things spies do — fight, go to ritzy nightclubs, have sex, worry about each other — but again, for the umpteenth time, not as excitingly as the Bourne movies did it. Even the worst of the Bournes (Legacy, the fourth one) is better than this disappointingly inert, lifeless adventure. Hemsworth really is a rotten actor. This is probably the worst cast Mann has had to work with. Stuart Dryburgh’s nighttime cinematography, however, twinkles deliciously.

One last complaint: In the finale, Hathaway faces the sweaty Blackhat in the midst of some sort of colorful Indonesian ritual featuring dancing maidens and lines of marchers parading in formation. In order to catch up with each other, both characters push and punch the marchers out of the way as if they were indistinguishable pieces of scenery rather than people. These ordinary, essentially faceless Indonesians unmistakably come across as pawns in the global cyber-crime game, something to be shoved out of the way to get to the main action. It would be hard to find a more apt metaphor for the business/tech world’s rampage into every corner of the earth.