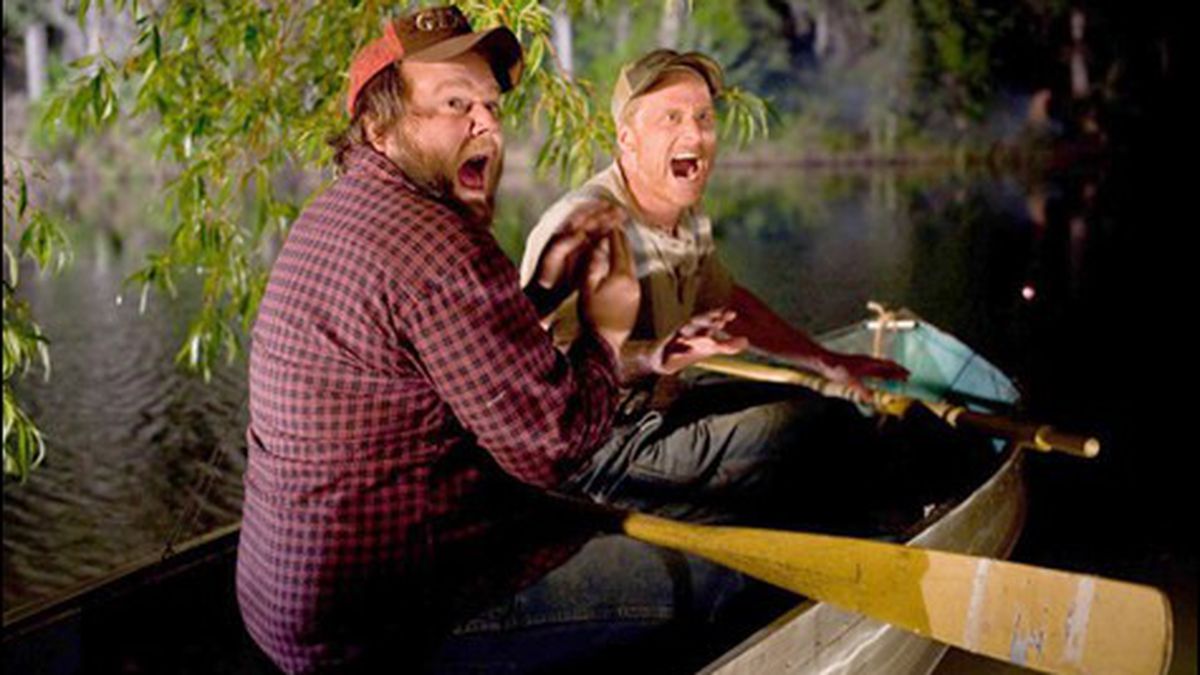 The hills have dorks.

It’s always a pleasure when a film comes out of nowhere and turns things upside down in a positive way, doing things no one ever thought of before and making the movie-going experience new again. It almost revives a film fan’s faith in humanity. Tucker & Dale vs. Evil is not that movie. But it’s the closest we’re going to get this week.

It stars Tyler Labine. For those of you who occupy your time doing more constructive things than following entertainment trends, Labine is the latest “bearded, fat, dumb dude” that Hollywood casting directors are crazy about. He’s done more movies in the past year than Terrence Malick has made in his entire career. BFDDs have been hella popular the past few seasons, taking over from clean-shaven, fat, dumb dudes like Jonah Hill. Someone somewhere must have made the determination that the beard adds a certain mystery, perhaps a touch of sexiness, to the sort of character who gets his penis stuck in a toaster.

Whatever it is the guys at the studios are looking for, Tyler Labine has it. Think of him as the lower-priced alternative to Jack Black and Zach Galifianakis, to name two preeminent BFDDs. Wait a minute, we forgot Seth Rogen. But then he shouldn’t really count. Rogen, at one time the go-to man for hirsute, portly gross-outs, is transitioning from a bearded, fat, dumb dude to an amusing, sophisticated, urban dweller. And then there’s ever-reliable Dan Fogler — but we’re getting sidetracked here.

Where were we? Oh yeah, killer hillbillies versus frat boys and sorority girls, with a twist. Eli Craig, the director, and Morgan Jurgenson, an editor turned screenwriter, had the happy idea of reversing the usual slasher-flick geometry. Tucker (played by workaholic second banana Alan Tudyk) and Dale (Labine) are a couple of slovenly, beer-swilling, moronic, but essentially harmless rednecks on their way to their getaway retreat, a dilapidated shack in the woods they’re planning to fix up while spending the weekend fishing on the nearby lake (any further unused Brokeback Mountain plot threads will have wait for the sequel). In a chance encounter direct from the Deliverance cliché file, while gassing up at a service station they coincide with a carload of airhead college students who misinterpret Dale’s awkward friendliness as sure signs of rustic menace.

So the stupid country boys meet an even stupider group of city youths who think the hicks want to carve them up and make yuppie jerky out of them. Cue well-timed and utterly hilarious bloody accidents with things you might find on a farm: nail gun, wood chipper, chainsaw, kerosene lamp, angry bees, the sheriff (Philip Granger), etc. The boys think the students are part of a drug-crazed suicide pact, and Allison (Katrina Bowden), the coed they rescue from drowning and take back to the shack, doesn’t help matters.

The funniest thing about Tucker & Dale is how completely innocent the two guys are. True, they look as if they haven’t bathed lately, but at least they don’t wear polo shirts with turned-up collars. The more gently and hospitably they behave, the more insanely violent the students become, especially head frat boy Chad (Jesse Moss), our nomination for best late-summer crusted barbecue.

Crazy dialogue is exchanged: “Trust me, I’m stupid” and “They cut off his bowlin’ fingers!” In the annals of dumb and dumber, Tucker and Dale are a long way from the bottom of the barrel. The timing is impeccable, the gags are wonderfully tasteless, and the overexposed Labine finally finds a role that suits him. With guidance by director Craig (the son of Sally Field), he and Tudyk have a comic chemistry that James Franco and Danny McBride — to name one unfortunate example — would kill for.

Tucker & Dale vs. Evil was an audience favorite at Sundance this year. No wonder. If you had to sit through eleven days of stuff like Gun Hill Road, Circumstance, and the latest Morgan Spurlock documentary you’d be willing to make a bet on a humorous hillbilly carnage spree, too. I’ve got an idea for the follow-up: Tucker & Dale vs. the Mortgage Company.

Tagami’s Got the Army Base