Because sometimes you need to drink a Bloody Mary with steak in it. 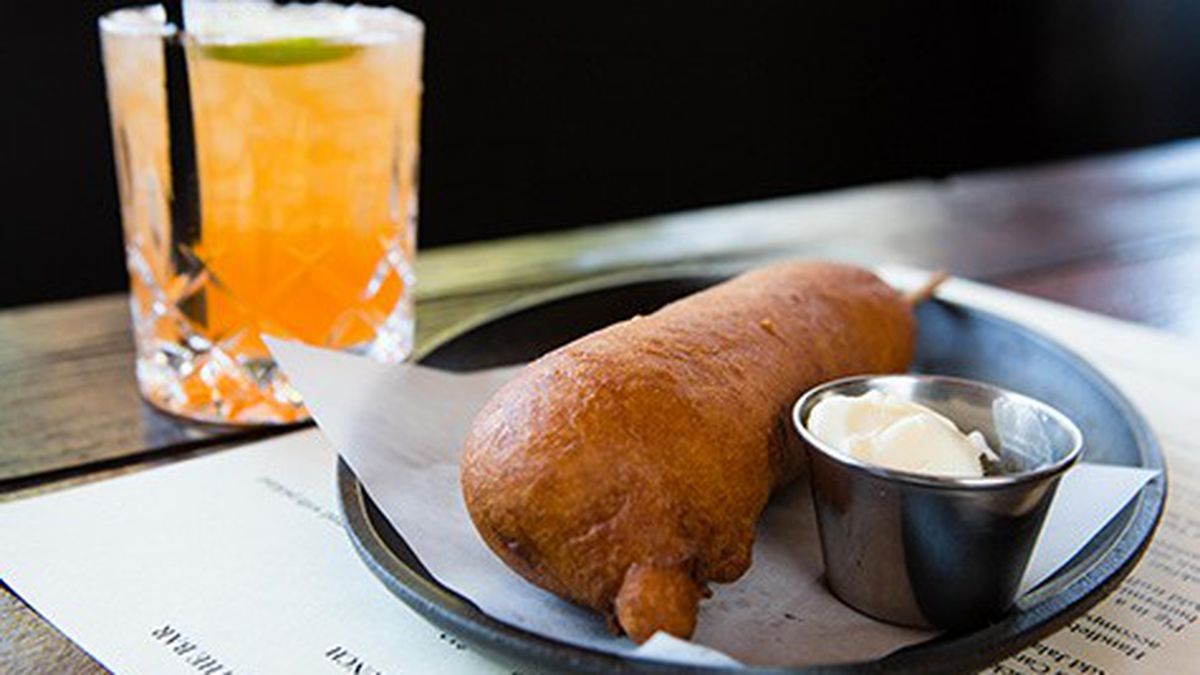 The Bay Area is ground zero for health-conscious, animal-conscious, sustainable, farm-to-table, farm-to-taco-truck, farm-to-table-to-bar-to-coma food establishments. And the East Bay is no exception when it comes to healthier food alternatives. We’ve got more quinoa- and kale-based options than you could shake an organic bamboo stick at. But sometimes, you just want to mouthbang a deep-fried sausage on a stick. In this enterprise, the East Bay also excels. This list celebrates the most decadent, over-the-top fare at some of our favorite East Bay establishments, which are, of course, still mostly staying the organic, sustainable, responsible course — just doing so while also adding bacon, fat, bone marrow, and ham jelly to food you already love. Enjoy — but not excessively!

Pig in a Blanket

Let’s start with the aforementioned sausage on a stick, a creation of Roland Robles. Handlebar’s (984 University Ave., Berkeley) take on a pig in a blanket is decidedly of the county-fair variety. It’s served during industry brunch — Saturday-Monday, so that food service workers who usually work all weekend can get their brunch on — the Monday iteration of which comes with a free cocktail, so you’re already on your way to filling you decadence quota. Robles’ takes a hearty breakfast sausage, impales it on a stick, corn-dog style, dips it in pancake batter, and then deep-fries it until it’s crispy and bronzed like an Adonis. On top of all that, it comes with a maple-syrup-infused butter with which to slather your pancake piggy in sweet, fatty goodness.

Named after the construction foreman who miraculously survived an accident in which he was pierced through the head with a railroad spike, the Phineas Gage sandwich at Perdition Smokehouse (2050 University Ave., Berkeley) is a meat bomb that stands at half a foot tall. It consists of chopped, fatty brisket and sliced hot links, a purple-cabbage coleslaw, pickle slices, and two Acme buns skewering the whole beast together (thus giving it its name). For extra hedonist points, slather on some of Perdition’s Brew BQ sauce, which is made with two different stout beers and cold-pressed coffee.

Most of the deep-dish, Chicago-style pizzas from Zachary’s (5801 College Ave., Oakland) meet the qualification of “decadent.” (We even have our doubts about the “Good Health” pizza option, despite its promise of low-fat cheese). Because Chicago-style is more casserole than pizza, and because Zachary’s Carne pizza is composed of mozzarella, diced tomato sauce, Italian sausage, pepperoni, salami, and chopped bacon, all lovingly shelled in a buttery crust, the Carne takes the cake (or pie, in this case) as a dish that will leave you blissfully comatose for hours.

Oakland chef James Syhabout’s take on a “Bloomin’ Onion” (or an “Awesome Blossom” depending on which mall chain restaurant you frequented in your past) at The Dock (95 Linden St., Oakland) is a glorious mix of high- and low-brow epicurean delights. It starts with fennel and onion petals, which are beer-battered and coated in rye flour before being deep-fried. Then the petals are sprinkled with caraway salt, and the dish is served with a luxurious and rich dill sour cream caviar dip. Our food reviewer Luke Tsai described it as “a showstopping piece of fried decadence.”

Practically Every Dish at Homeroom

By default, a restaurant devoted entirely to mac ‘n’ cheese can already be classified as superbly gluttonous. We’ve never once left Homeroom’s (400 40th St., Oakland) cheesy, starchy opium den without needing ample recovery time, and usually, a nap. And for good reason. Its macs are hefty, creamy, buttery, and yet still classy — many come with local cheeses and Niman Ranch meats. While probably not the most excessive, the Gilroy Garlic (creamy gouda, sharp pecorino, and, aptly, lots of garlic from Gilroy) will always be our favorite. Make any mac more hearty by adding one of Homeroom’s twenty toppings, which include such marvels as “trailer style” (hot dogs and potato chips), a fried egg, chorizo, and still more garlic butter.

While not a scientific measure by any stretch of the imagination, one testament to the abundant loyalty East Bay diners have to KoJa Kitchen’s (2395 Telegraph Ave., Berkeley) Kamikaze Fries is the six hundred photographs that ardent devourers have posted to Yelp in praise of this gut-stretching “side dish.” It starts with a base of salty waffle-cut fries, which are then topped with a heaping portion of beef bulgogi, Sriracha, spicy mayo, green onions, and minced kimchi. Remarkably, the fries don’t get too weighed down by all the meats and creamy goodness piled on top. Not that we’d complain if they did.

At Grandma Mary’s Hot Dog Cart (69th Ave. and International Blvd., Oakland), sausage is the name of the game. For a scant $5, you can hoover what’s known as The Kitchen Sink, a meat orgy that starts with a grilled hot link split in half (for maximum juice-spillage and char) and loaded with pastrami and bacon. Then, if you request it “fully loaded,” it’s topped with grilled onions and bell peppers, pickled hot cherry peppers, shredded cheese, ketchup, mustard, mayonnaise, and barbecue sauce. Cart owner Marco “Co” Pollard has also been known to run other hedonistic specials, such as a chili cheese dog with pastrami and bacon.

We’d be remiss if we didn’t mention the alcoholic beverage that can also double as brunch. Served unadorned ACME’s (2115 San Pablo Ave., Berkeley) Bloody Mary is already a robust and delicious hangover remedy, but on weekends, you can upgrade the spicy, tomato beverage to a “meat shake.” Depending on how the bartender is feeling that day, your meat shake may be garnished with a variety of vegetable additions — pickles, peppers, celery, olives, jalapeños, pickled string beans, potato, cucumber, or zucchini — and also potentially hunks of pepper jack cheese. Then this Bloody Mary on ‘roids gets skewered with carne asada. A boozy steak for brunch that’s under $10? Now that’s an East Bay bargain.

We’ll be honest, some dishes at Rudy’s Can’t Fail can and do often fail, but where Rudy’s (4081 Hollis St., Emeryville and 1805 Telegraph Ave., Oakland) truly succeeds is in the shake department — most notably, for the Shakin’ Jesse, made with an already hefty foundation of chocolate malt ice cream, two shots of Peet’s espresso, whipped cream, and cherries. But the real cherry-on-top comes from the two shots of Guinness added to the caffeine-rich dessert, providing a slightly bitter, foamy counterpoint to all that jittery sweetness.

The offerings at Honor (1411 Powell St., Emeryville) are so gluttonous and so indulgent that a glance at the menu has been known to make folks willingly kiss their seventies goodbye. Consider, if you will, the Bone Marrow Brûlée, served with bulgogi-marinated jalapeños and garlic confit. Or the alarmingly named Bucket O’ Yard Birds, which comes with buttermilk fried chicken, macaroni salad, sausage biscuit, and housemade hot sauce. Hell, even Honor’s French fries come with a jelly made with ham. But the piece de (diet) resistance has to be the Bourbon Maple Chicken Lollipops, which involve a lush serving of buttermilk fried confit chicken legs, tomato-bacon jam, and a bourbon maple glaze. Just writing that description gave us a mild case of diabetes. We regret nothing.