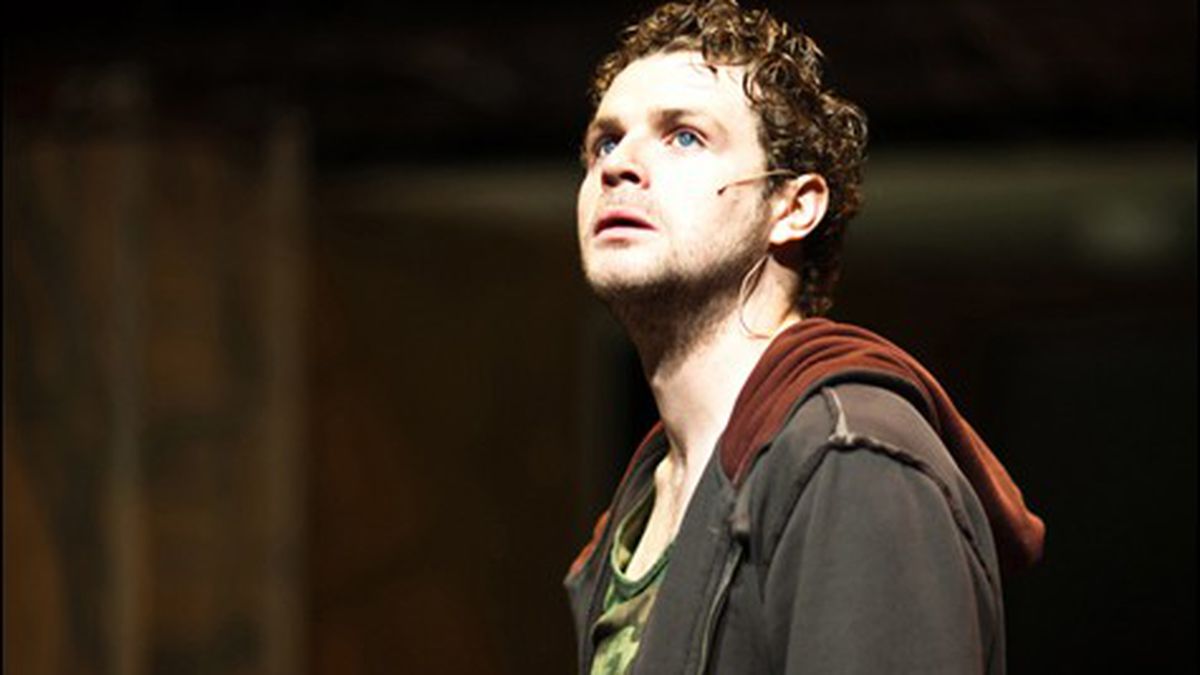 The class struggles of 19th-century Germany go beyond doom and gloom in The Shotgun Players' dynamic new production.

Georg Büchner’s Woyzeck is a nihilistic tale of the miseries of 19th-century poverty and class inequality. It’s a story of a man so downtrodden that, without its theatricality, would be a total downer. But Robert Wilson’s 2002 version incorporates music and lyrics by Tom Waits (and his wife Kathleen Brennan), whose singular style of junkyard jazz gives adds comic cynicism to Büchner’s uncompleted play. Songs titles such as “Misery Is the River of the World,” “Everything Goes to Hell,” and “God’s Away on Business” pretty much say it all.

In The Shotgun Players’ top-notch production of Wilson’s Woyzeck, director Mark Jackson injects a hipster grunge aesthetic to this desolate, hope-dashing farce. Alex Crowther plays Woyzeck, a young man struggling to provide for his lover, Marie (Madeline H. D. Brown), and their child. He takes various odd jobs, dependent on the meager wages from his selfish and erratically behaving superiors. When he shaves a portly, military captain (Anthony Nemirovsky), he’s instructed to replace the shaving cream with whipped cream so the gluttonous Captain can lick his own face. He’s also paid to be a guinea pig in a wacko medical experiment for which he must eat only peas. Disheveled and desperate, Woyzeck stands at attention, subjecting himself to prodding and apologizing for peeing anywhere else but in the doctor’s cup.

Woyzeck’s heartless employers are cartoonishly menacing. Nemirovsky’s Captain is a nasty hedonist — think Newman from Seinfeld, but with unbridled power. As The Doctor, Kevin Clarke is delightfully bizarre. He has the unhinged manner of a mad scientist, with a shock of Albert Einstein hair. Clarke’s edgy unpredictability makes the doctor both menacing and hysterical. As he seizes Woyzeck for his maniacal purposes, The Doctor sings, I’d sell your heart to the junkman baby, for a buck, for a buck. Like an indentured backup singer, Woyzeck chimes in with his horror-stricken falsetto in a single drawn-out out word: bacteria. It is a masterful duet of terror and cruelty.

The songs that make up most of the play were later recorded on Waits’ 2002 album Blood Money. But the album doesn’t get near the power of the songs as they are integrated into Jackson’s adaptation. On record, the songs are sung only with Waits’ pulverized baritone and clamorous orchestrations. It’s more weird and harsh than affecting.

But under David Möschler’s musical direction, the music in this adaptation captures the characters’ desperation, deceit, and numbness. If there’s one thing you can say about mankind, there’s nothing kind about man, the cast sings.

The music — played on everything from a tuba to a toy piano, a vibraphone, and a filing cabinet — is fraught with discord and chaos. There are assaulting percussions, ironic waltzes, lively big-band jazz, deceptively tender ballads, and sarcastic upbeat numbers.

Beth Wilmurt deftly conveys the dead-inside human condition as Margaret, a cynical hooker in a red wig. Looming above on the stage’s scaffolding, she sings in a numb staccato.

Together with Marie, she performs “A Good Man Is Hard to Find.” On Blood Money, Waits makes the song work, but it’s far more meaningful here, sung by fallen women.

Brown is convincing as Marie, a sexy East Village hipster in a seedy retro kitchen, who silently offers McDonald’s French fries to Woyzeck and watches her infant with tenderness and futility. She takes the crumpled bills that her devoted Woyzeck puts on the table, but her head is turned by the dashing Drum Major, played with impeccable hilarity by Joe Estlack. In his shiny military duds, he peacocks around her — performing an absurd mating ritual that incorporates a moonwalk and other Michael Jackson flourishes.

On Nina Ball’s set, you can nearly see the grease on the walls, the piss in the pots. Christine Crook’s costume designs playfully demonstrate the haves and the have-nots.

The Drum Major’s conquest and his taunting of Woyzeck strip our proletariat hero of the last vestiges of his humanity. The wind sings to him stab stab dead. Marie sings to the baby: Nothing’s ever yours to keep/Close your eyes, go to sleep.

In Jackson’s smart and dynamic production, looking into the abyss was never so enjoyable.